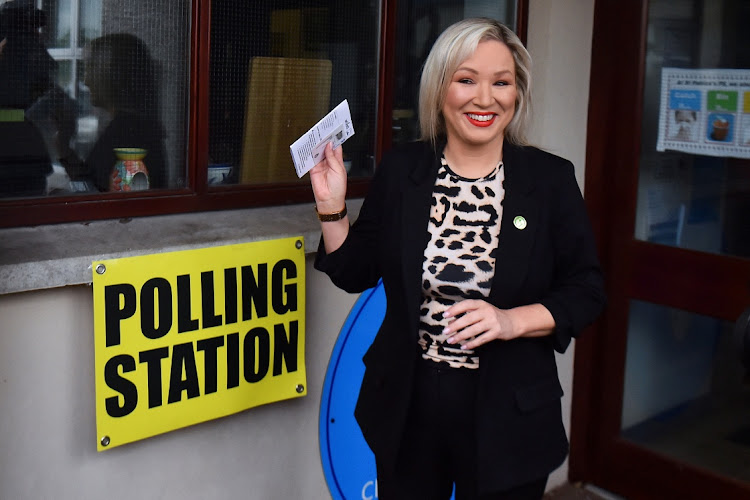 Sinn Fein deputy leader Michelle O'Neill stands outside a polling station in Coalisland on the day of the Northern Ireland Assembly elections, in Northern Ireland May 5 2022. Picture: REUTERS/CLODAGH KILCOYNE

Belfast — Sinn Fein sought to become the first Irish nationalist party to win the most seats in British-ruled Northern Ireland on Friday as counting began in an election that could mark a historic political shift.

A Sinn Fein triumph would be a victory for a party wanting Northern Ireland to leave the UK 24 years after the Good Friday peace accord that ended three decades of sectarian bloodshed between those seeking unity with Ireland and those wanting to remain part of the UK.

Though a poll that could lead to unity with the neighbouring Republic of Ireland is likely to be years away, Sinn Fein wants planning to begin north and south of the border, where it is by far the most popular party three years out from a general election.

Support for Sinn Fein stood at an average of 25% across the final campaign polls, giving the former political wing of the Irish Republican Army a six-point lead over its nearest rival, the pro-British Democratic Unionist Party (DUP), whose popularity has shrivelled over the past 18 months.

Sinn Fein benefited from a jump in turnout to 65% five years ago when it closed the gap with the DUP to just one seat. Analysts said incomplete turnout data suggested fewer people turned out this time, with the first results due at about 1pm GMT.

“Sinn Fein need to have the type of first preference percentage advantage that some of the polls were indicating if they are to end up as the largest party in terms of seats won,” said Chris Donnelly, a political commentator and former Sinn Fein candidate.

“They have the harder job on paper holding the seats they gained in 2017. It could be extremely close.”

Under Northern Ireland’s proportional representation voting system, candidates can pick up surplus votes from those elected or eliminated, giving a bigger party like the DUP a better shot at winning the final seats in the multi-seat constituencies.

In 1998, the Irish nationalist SDLP party had the highest first preference vote by a narrow margin but still finished four seats behind its main unionist rival.

The main nationalist and unionist rivals are obliged to share power under the terms of the 1998 peace deal. But the DUP has said it will no longer do so unless the protocol governing Northern Ireland’s trade with the rest of the UK after its exit from the EU is totally overhauled.

Britain and the EU are at an impasse in talks on how to remove many of the checks on goods entering Northern Ireland from the rest of the UK, imposed under the protocol to avoid fraying the EU single market via the open border with Ireland.

“The assembly cannot function if the poison of the protocol is still there,” Sammy Wilson, a DUP member of the British parliament, told BBC Radio Ulster.

The outcome is also likely to reaffirm that a majority of lawmakers — including Sinn Fein — in the regional assembly favour retaining the protocol. A majority in Northern Ireland voted to remain in the EU in Britain's 2016 Brexit referendum that yielded a narrow UK-wide majority to leave.