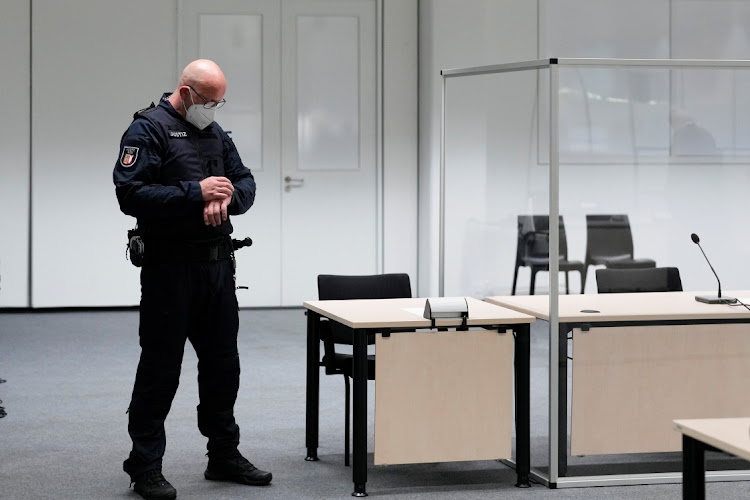 A judicial officer looks at his watch before a trial against the accused 96-year-old former secretary to the SS commander of the Stutthof concentration camp, at a courtroom in Itzehoe, Germany, September 30 2021. Picture: REUTERS/MARKUS SCHREIBER

A 96-year-old German woman fled before the start on Thursday of her trial on charges of aiding and abetting mass murder in a Nazi concentration camp during World War 2.

Irmgard Furchner is accused of having contributed as an 18-year-old to the murder of 11,412 people when she was a typist at the Stutthof concentration camp from 1943 to 1945.

“The accused is on the run,” said Frederike Milhoffer, spokesperson for the Itzehoe district court. “She left her home early in the morning in a taxi in the direction of a metro station.”

Milhoffer said it was not known where she was and an arrest warrant was issued. Itzehoe is in Germany’s far north, about 100km from the Danish border.

Lawyers milled around the makeshift courtroom that had been rigged up in a nearby industry park because of the immense media interest. But Furchner’s chair, marked with her name tag, remained empty.

Charges cannot be read unless Furchner, who faces trial in an adolescent court because of her young age at the time of the alleged crimes, is present in court in person.

She is the latest of the nonagenarians to be charged with Holocaust crimes in what is seen as a rush by prosecutors to seize the final opportunity to enact justice for victims of Nazi mass killings.

Although prosecutors convicted the major perpetrators — those who issued orders or pulled triggers — in the 1960s “Frankfurt Auschwitz Trials”, the practice until the 2000s was to leave lower-level suspects alone.

According to the news magazine Der Spiegel, Furchner transcribed execution orders dictated to her by camp commandant Paul-Werner Hoppe, who was convicted as an accessory to murder in 1955. The magazine reported that Furchner wrote to the judge asking to be tried in absentia, a legal impossibility in Germany.

Oskar Groening, known as the “accountant of Auschwitz” for his job recording valuables seized from deportees on their arrival at the extermination camp, was sentenced to four years in 2016 as an accessory to murder, but he died before his sentence could start.

Bruno D was convicted last year, aged 93, of abetting the murder of 5,230 people as a Stutthof guard. He was tried in a youth court despite his age because he was still a juvenile at the time of the crimes.

About 65,000 people died in the concentration camp, near Gdansk in today's Poland from 1939 to 1945 of starvation and disease or in the camp’s gas chamber, including prisoners of war and Jews caught up in the Nazi war of extermination.

BOOK REVIEW: A Hitler we have not seen before

Volker Ullrich's 'Hitler: Downfall 1939-45' may make for uncomfortable reading as we are accustomed to regarding Hitler as inhumane.
Life
1 year ago

Global anti-Semitism is on the rise, 75 years after Holocaust