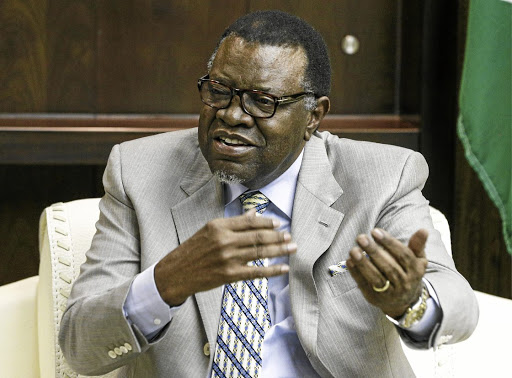 Berlin — Germany apologised on Friday for its role in the slaughter of Herero and Nama tribespeople in Namibia more than a century ago and officially described the massacre as “genocide” for the first time, as it agreed to fund projects worth over a billion euros.

Namibian President Hage Geingob welcomed the “historic” move, but Herero paramount chief Vekuii Rukoro dismissed a deal agreed by the two governments as “an insult” because it did not include payment of reparations.

Instead Germany will fund €1.1bn of reconstruction and development projects in Namibia, which German foreign minister Heiko Maas said would directly benefit the genocide-affected communities.

“That's a black cat in the bag instead of reparations for a crime against humanity,” Rukoro said. “No self-respecting African will accept such an insult in this day and age from a so-called civilised European nation.”

German soldiers killed about 65,000 Herero and 10,000 Nama people in a 1904 to 1908 campaign after a revolt against land seizures by colonists in what historians and the UN have long called the first genocide of the 20th century.

While Germany has previously acknowledged “moral responsibility” for the killings, it had avoided making an official apology for the massacres to avoid compensation claims.

In a statement announcing an agreement with Namibia after more than five years of negotiations, Maas said the events of the colonial period should be named “without sparing or glossing over them”.

“We will now also officially call these events what they were from today's perspective: a genocide,” he added.

“In light of Germany's historical and moral responsibility, we will ask Namibia and the descendants of the victims for forgiveness.”

He did not call the funding “reparations” for atrocities.

Namibian media reported on Thursday that the funds promised by Germany would support infrastructure, healthcare and training programmes over 30 years.

Geingob welcomed the move as a “step in the right direction”, his spokesperson said.

“The apology on the part of Germany and acceptance there was a genocide is in itself historic and speaks to the moral responsibility Germany has towards Namibia and the communities affected by the first genocide of the 20th century,” Alfredo Hengari said.

Germany, which lost all its colonial territories after World War 1, was the third-biggest colonial power after Britain and France. However, its colonial past was ignored for decades while historians and politicians focused more on the legacy of Nazi crimes, including the Holocaust.

Sima Luipert, 52, who identified herself as of Namibia's Nama people, said Germany should not have directed its apology to the Namibian state, which did not exist at the time of the genocide and was given no mandate to speak to Germany on behalf of traditional authorities.

“Germany must come to the Nama people, and to the Herero people, and to ask for forgiveness,” she said. “It is up to us to decide if that apology is genuine or not.

“This is not about money, it is about the restoration of human dignity.”

The previous draft, released on Christmas eve in 2019, was earlier in May approved by the cabinet for submission to parliament
National
1 year ago

Namibian President Hage Geingob has turned down Germany’s offer of $11.7m in reparations for the genocide committed by the German empire
News & Fox
1 year ago