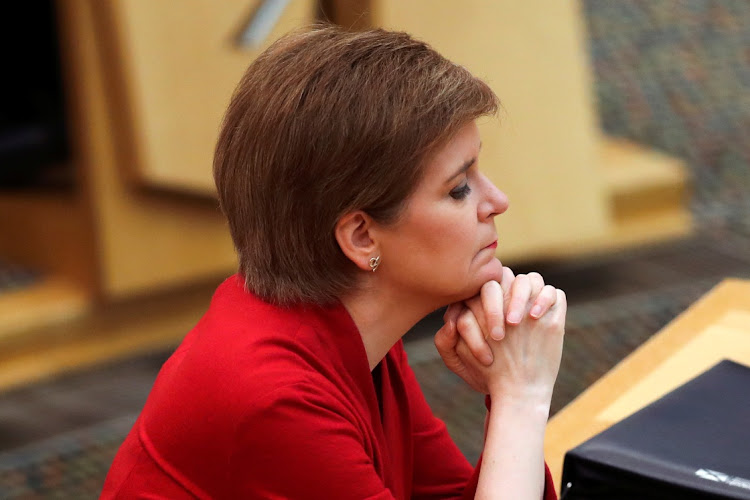 First Minister Nicola Sturgeon has increased her popularity during Brexit and the pandemic, and her Scottish National Party (SNP) has a seemingly unassailable lead in the polls before Scotland votes in May. Yet her falling out with predecessor and former mentor Alex Salmond is dominating the political conversation in Edinburgh, just when support for breaking away from the rest of the UK is strongest.

Salmond was acquitted by a court last year of sexually assaulting women during his time in office. He previously won a judicial review when a judge ruled that the way Sturgeon’s SNP-run government had investigated the allegations against him had been unlawful. He says the decision to pursue the case was politically motivated, a charge Sturgeon flatly denies.

The controversy is the subject of an inquiry by the Scottish parliament and this week it published explosive documents from Salmond ahead of his planned appearance before lawmakers on Wednesday.

Parliament later revised some of what was released after the public prosecution service raised concerns. Salmond then canceled, and a parliament spokesperson said the committee would instead meet in private to discuss “the implications of Mr Salmond’s response”. The former SNP leader has offered to attend on Friday, the BBC reported.

In his submission, Salmond accused a number of Scottish government and SNP officials of a “deliberate, prolonged, malicious and concerted effort” to remove him from public life and even imprison him. Those accused include a series of senior SNP figures including Sturgeon’s husband — the party’s CEO — and her chief of staff.

Sturgeon robustly dismisses the allegations. Salmond “appears to be suggesting some kind of conspiracy or concerted campaign against him without a shred of evidence — so this is his opportunity,” the first minister told the BBC.

Sturgeon is very much the political face of Scotland. She has been a key adversary to Johnson, whose upper-class charms fail to resonate north of the English border

“The burden of proof lies with him to replace the insinuation and assertion that we’ve heard over several months now with evidence,” she said. “Now I don’t believe he can do that because I know what he is claiming about a conspiracy is not true.”

The question is whether the party infighting now being aired in public moves the political needle just as Sturgeon aims to exert more pressure on British Prime Minister Boris Johnson to allow another referendum on independence.

When Scotland first voted on the issue, in 2014, the referendum was granted by an act of parliament, making it legally watertight, but Johnson refuses to sanction another shot at independence, saying it is too soon. Sturgeon says that position would be untenable should the SNP prevail again in May’s Scottish elections on a campaign of independence.

Opinion polls show the SNP is on track for a majority, while independence now has a clear lead over remaining in the three-centuries-old union with England and Wales. In 2014, polls suggested only about a third of voters favoured splitting from the UK, though the “No” campaign won the referendum by the narrower margin of 55% to 45%. According to Emily Gray, MD of Ipsos Mori in Scotland, the Salmond inquiry has yet to register with the electorate.

Sturgeon is due to testify to Scottish lawmakers in early March. The outcome of the inquiry — and that of a separate one into whether she misled parliament over a meeting with Salmond — could put pressure on her if she’s found to have broken the ministerial code, as Salmond alleges and which she denies. If she is found to have deliberately misled the legislature, protocol suggests she would be expected to resign.

“It hasn’t made a big difference over the past year, but that could change fast in the coming weeks if the issue starts to cut through more with voters,” said Gray of Ipsos Mori. “That has the potential to have a real impact on the SNP.”

Sturgeon is very much the political face of Scotland. She has been a key adversary to Johnson, whose upper-class charms fail to resonate north of the English border. Scottish voters perceive her to have handled the pandemic better than the prime minister, while she and her government remain vehemently anti-Brexit, in line with Scottish public opinion that opposed leaving the EU.

Still, after almost 14 years in power overseeing policy areas from Scotland’s education to health, the spat with Salmond is opening up party fissures over the SNP’s future direction and the path to independence.

Salmond built the SNP into a potent force in Britain before handing the leadership to Sturgeon after the 2014 referendum, and he still has his backers. The party is the third-largest in the UK parliament, with 47 of Scotland’s 59 seats at Westminster.

Johnson’s Conservatives — the main opposition in Scotland — say the dispute comes down to a question of whether Sturgeon broke the rules when telling lawmakers about her meeting with Salmond.

“This isn’t about a conspiracy, as she and other SNP figures have repeatedly suggested at every opportunity they get,” said Scottish Conservative leader Douglas Ross. “It’s about whether the first minister misled the Scottish parliament and broke the ministerial code.”

The player, on loan to Rangers, may have also ruined his chance of a permanent move from France’s Amiens
Sport
2 months ago

While some European lawmakers issued statements backing US institutions and its democracy to overcome the turmoil, others were more condemning of the ...
World
4 months ago
Next Article