Most leaders in Europe were shocked; some want Trump to pay the consequences; but Brazil’s Jair Bolsonaro is still an avid supporter 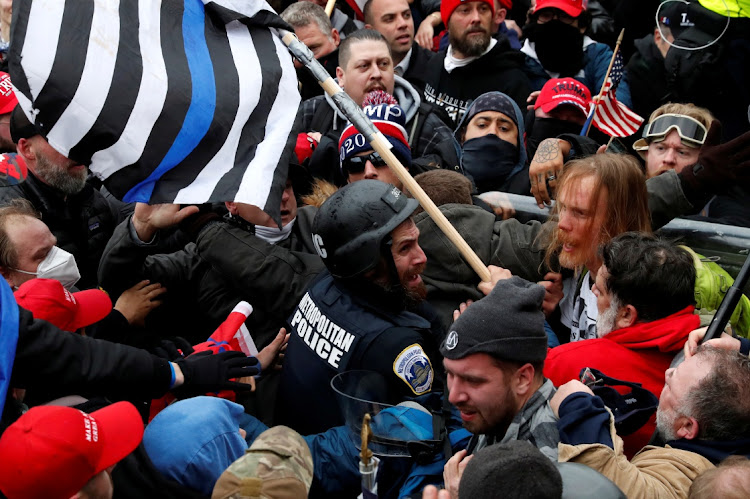 Pro-Trump protesters clash with police at a rally to contest the certification of the 2020 US presidential election at the Capitol Building in Washington, US, January 6 2021. Picture: REUTERS/SHANNON STAPLETON

Canberra — World leaders voiced alarm over a pro-Trump mob’s breach of the US Capitol, with the UK and Australia calling for a peaceful transfer of power and allies in Europe calling the protesters’ actions an attack on democracy.

“Disgraceful scenes in US Congress,” UK Prime Minister Boris Johnson tweeted after President Donald Trump’s supporters stormed the building. Though well known for his admiration of the outgoing president, the British leader said “it is now vital that there should be a peaceful and orderly transfer of power”.

Another leader who has previously voiced support of Trump, Australian Prime Minister Scott Morrison, called the scenes “very distressing” and said he was looking forward to a peaceful transfer of power.

Canadian Prime Minister Justin Trudeau said in a radio interview that his government was “concerned ... We’re following the situation minute by minute as it unfolds,” he said. Japan, one of the US’s most powerful allies in Asia, was watching “with concern” the situation at the US Capitol, chief government spokesperson Katsunobu Kato told reporters.

German Chancellor Angela Merkel expressed anger and sadness over the images from Washington. “I regret very much that President Trump has not recognised his defeat since November, and again yesterday,” she told reporters in Berlin. “Doubt was sown about the election result and that created the atmosphere for the events of yesterday evening.”

“The rampage at the Capitol yesterday was a disgraceful act that must be vigorously condemned,” Israeli Prime Minister Benjamin Netanyahu said during a meeting with US treasury secretary Steven Mnuchin, according to his office. “I have no doubt that American democracy will prevail — it always has.”

Their comments came after president-elect Joe Biden — whose victory was confirmed by Congress early on Thursday — used a televised appearance to urge Americans to “think what the rest of the world is looking at” when they viewed the chaotic scenes from Washington.

While some European lawmakers issued statements backing US institutions and its democracy to overcome the turmoil, others were more condemning of the president and his supporters.

“The enemies of democracy will rejoice at these unbelievable images out of Washington,” said German foreign minister Heiko Maas. “Inflammatory words reap violent deeds.” Scotland first minister Nicola Sturgeon said, “Shame on those who have incited this attack on democracy.”

Irish foreign minister Simon Coveney said on Twitter that the storming of the capital was “a deliberate assault on Democracy by a sitting president”, adding “the world is watching”.

Carl Bildt, co-chair of the European Council on Foreign Relations, said his “sincere hope is that the evil man who bears the responsibility ultimately will suffer the consequences”.

Other leaders on friendly terms with Trump played down their comments.

Brazil’s President Jair Bolsonaro told supporters outside the presidential palace in Brasilia that he stood by Trump. Bolsonaro has been a staunch backer of Trump, ditching Brazil’s multilateral approach to foreign policy to fully align his country to the US.

“You know I am connected to Trump, you know my response,” he said, adding that there “have been many reports of fraud” in the US election. Bolsonaro also said he believed the 2018 Brazilian election — which he won in a runoff — was riddled with fraud. “There was fraud during mine. I should have won in the first round.”

Polish President Andrzej Duda, who considers himself a political ally of Trump, refrained from any criticism of the US leader, saying in a tweet the events in Washington were an “internal affair” and that power depended on the will of the voters.

Meanwhile, China used the opportunity to drive home a narrative of American hypocrisy, with state media casting the situation as “retribution” for Washington’s support for global protest movements.