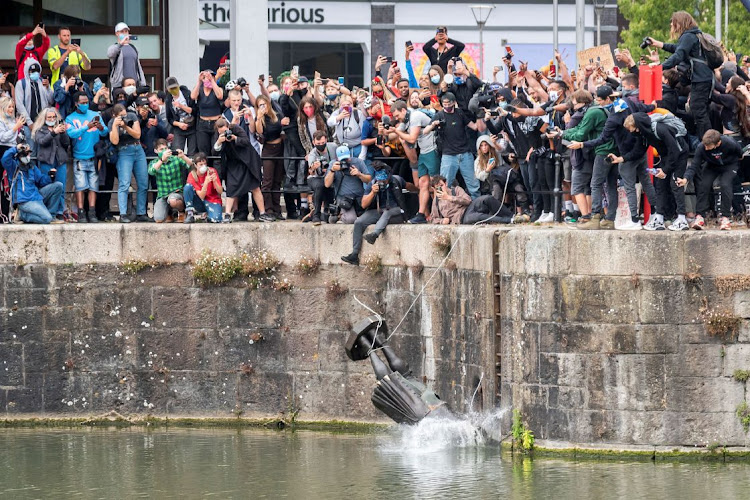 The statue of 17th-century slave trader Edward Colston falls into the water after protesters pulled it down and pushed into the docks during a protest against racial inequality in Bristol, Britain, June 7 2020. Picture: VIA REUTERS/KEIR GRAVIL

London — The images went everywhere: angry demonstrators in the 1,000-year-old British city of Bristol toppled the statue of an 18th century slave trader and heaved it into the Avon.

As curator at Britain’s only museum dedicated to slavery, Jean-Francois Manicom wasn’t surprised the 125-year-old monument was caught up in today’s movement against racism. At Liverpool’s International Slavery Museum, he’d dealt with the fallout of sweeping such legacies under the rug.

“At first, people were very suspicious — ‘wow, we are going to put on the table a story that was very painful, not very glorious for the people of Liverpool,’” says Manicom, who moved to the city after curating a similar museum in Guadeloupe. “Little by little, it became something that Liverpool is proud of.”

With the Black Lives Matter movement forcing the UK to confront historical demons, the contrasting approaches of its two slave-trading hubs offer lessons for societies grappling with a legacy of racism. Even Winston Churchill’s place in the pantheon required a renewed defence from the prime minister.

In Bristol, the fight was over Edward Colston, who was remembered until now for the numerous schools and hospitals he funded. Today’s tumult focused attention on the source of his fortune, and that’s where Liverpool’s experience comes in.

“Liverpool anticipated and to a certain extent pre-empted the kind of pressures that have blown up in Bristol because in Bristol they simply weren’t addressed,” said Nick Draper, former director of the Centre for the Study of the Legacies of British Slave-ownership at University College London.

Liverpool apologised for its role in the slave trade in 1999 and the museum was established in 2007 in the warehouses at the Albert Docks that were rejuvenated after local riots and a collapse in manufacturing. About 1.5-million enslaved Africans were taken to the Americas, many on ships fitted out at these docks. Sir Thomas Street, Gladstone Road and Parr Street are among local streets named after merchants or defenders of slavery.

“The reason Liverpool has done more to acknowledge its role is because we can’t escape from it,” said Laurence Westgaph, a local historian and activist. “It would be ridiculous to even attempt to.”

Discrimination, far-right threats and fraught relations with the police fostered a range of local black organisations that offered informal education of the city’s ties to slavery long before the formal one came about.

With the longest continuous black presence in the UK, Liverpool has also had a distinct community of black activists more akin to the US, according to Jessica Moody, a historian at the University of Bristol.

As much as Britain celebrates abolition, most historians agree that the nation is loathe to address its own involvement in the transatlantic slave trade, which saw more than 12-million Africans forcibly shipped over about four centuries and millions dying along the way.

George Floyd’s May 25 killing by the police in Minneapolis, US became a catalyst for a reckoning not only for the history but the disparities that remain. A Runnymede Trust report in 2020 shows black African households in the UK have 10 times less wealth than white British ones. Black people are about five times more likely to be stopped and searched by the police than the population overall, according to the latest official data.

While Bristol, where 6% of the population is black, has been singled out for starker ethnic inequalities than the rest of England, black people in Liverpool, who make up 2.6% of locals, also face a higher risk of unemployment.

There are now growing efforts to address the gap in history, both officially and otherwise. Bristol is rolling out a new school curriculum that will incorporate minority perspectives including black history.

“We’re all talking about issues that were a couple hundred years ago, but the effects of those issues are now,” says Lawrence Hoo, a black activist who has contributed to the effort through his art collective Cargo.

From a music venue to local schools, institutions named after Colston have announced name changes, some before the protests earlier in 2020.

The process of addressing British involvement in the slave trade is bound to spark fresh controversies over what deserves censure and how best to frame a legacy that’s imprinted across the nation. Protesters vandalised signs of Penny Lane in Liverpool in June, even though it is unclear whether the street made famous by a Beatles song is named after a slave merchant.

The city is now looking to take the lead again in helping the nation own up to its ties to slavery. The mayor has formed a task force led by housing manager Tracey Gore to address racial disparities that will also help discern which streets require plaques explaining their links to slavery.

Westgaph has been appointed historian-in-residence at the ISM, which also has plans to expand into a larger building. He has noticed a surge in interest in his slave trade tours — and much more among white people.

“People are very energised here at the moment,” he said. “My only worry is that it’s a fad. It can’t be a fad.”

Meanwhile, in Bristol, officials are planning to display the Colston statue with a 21st century twist. They’ll keep the graffiti that defaced it before it was tossed into the drink.