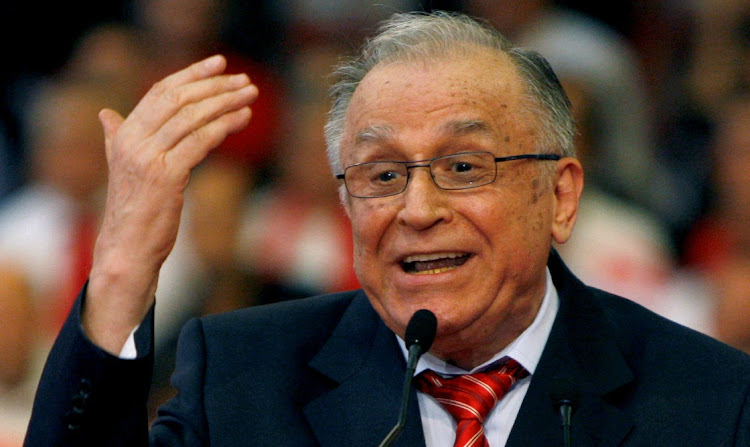 Romania's former president Ion Iliescu gestures while announcing his support for the head of Romania's Social Democrat party, Mircea Geoana, for the November 22 presidential elections during an extraordinary congress of his party in Bucharest in this October 2 2009 file photo. Picture: REUTERS/BOGDAN CRISTEL

Bucharest — Former Romanian president Ion Iliescu was officially charged with crimes against humanity by the country’s top prosecutor on Monday as it finalised an inquiry into the chaotic and bloody anti-communist revolution of 1989.

Iliescu, 89, has repeatedly said he is innocent. He enjoyed widespread popularity after the revolt against dictator Nicolae Ceausescu, who was deposed and executed in December 1989. But hundreds of people died in the ouster and Iliescu’s opponents accused him of stealing the revolution from the people.

“The completion of this case by our military prosecutors is one of the most important goals in the management project I assumed publicly three years ago: to solve Romania’s historical files,” general prosecutor Augustin Lazar told reporters.

No trial date has yet been set.

Tuesday’s official indictment came after prosecutors accused Iliescu in December 2018 of masterminding the formation of a group in December 1989, with the aim of gaining power and political legitimacy.

Prosecutors said that using statements and television the group engaged in “broad and complex misleading activities of diversion and misinformation” after Ceausescu fled the capital on December 22 1989.

Under the scheme, a general “terrorism psychosis” was fuelled, triggering “fratricidal fire, chaotic shootings and contradictory military orders”, that led to the deaths of 862 people and the wounding of another 2,150 after Ceausescu left.

About 13-million bullets were used by troops.

The conviction and hastily assembled execution of Ceausescu and his wife Elena was also part of the scheme pursued “in a simulated criminal trial”, on December 25 1989, prosecutors said.

Iliescu was confirmed as interim president by a temporary parliament in February 1990. As candidate of the National Salvation Front, he won 85% of a ballot in May 1990, an overwhelming vote of confidence in a man who had stepped into the spotlight only five months earlier in the confusion of revolution.

His critics at home and abroad accuse Iliescu, who stepped down in 2004, and other leading politicians of trying to block reform and protect the political heritage and ruling elite of the communist system.

Iliescu, the Moscow-educated son of a railwayman, is also on trial together with former prime minister Petre Roman on charges of crimes against humanity over the crushing of peaceful anti-government protests in Bucharest in June 1990 in which four people were killed.

Last week, he underwent heart surgery and doctors says he is in a stable condition.

Before Ceausescu’s overthrow, Iliescu had at one point been youth minister and an official in the Communist Party but fell foul of Ceausescu after the dictator became impressed with the Chinese example during a 1968 visit to Beijing.

He reacquired ministerial rank as head of Prices Commission but his star declined in 1984 after an argument with one of Ceausescu’s relatives.