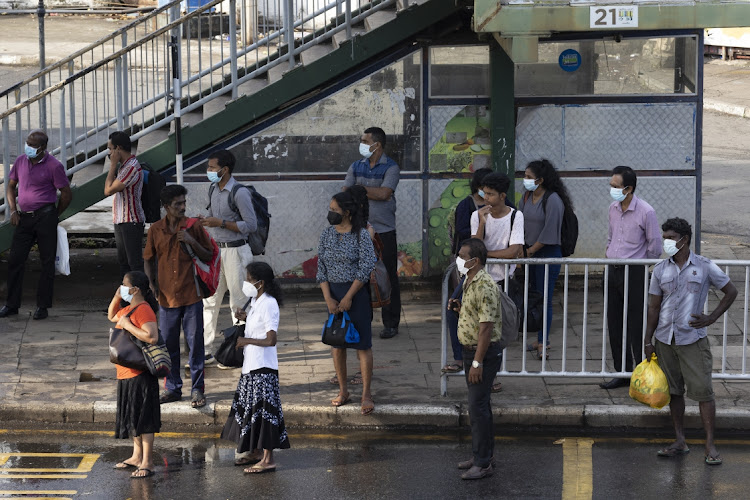 Members of the public wait for a bus after a nationwide curfew was lifted for a few hours in Colombo, Sri Lanka, on May 12, 2022. Picture: BLOOMBERG/BUDDHIKA WEERASINGHE

Many Sri Lankans thronged buses in the main city Colombo on Thursday to return to their hometowns during a brief relaxation in curfew, imposed after the prime minister quit and went into hiding and President Gotabaya Rajapaksa warned of anarchy.

The island nation off India’s southern tip, which overlooks shipping routes between Europe and Asia, is battling its worst economic crisis since independence. Violence erupted on Monday after supporters of former prime minister Mahinda Rajapaksa, the president’s elder brother, attacked an anti-government protest camp in Colombo.

Days of violent reprisals against government figures aligned to the powerful Rajapaksa clan followed. The army was called out to patrol the streets and police said nine people were killed and more than 300 injured in the clashes.

Security forces have been ordered to shoot to prevent violence and looting.

Hundreds of people thronged the main bus station in Colombo after authorities lifted an indefinite curfew at 7am on Thursday.

Streets in the commercial capital were calm, though there were queues at supermarkets as people ventured out to buy essential supplies before the curfew was reimposed at 2pm.

Fuel shortages are crippling the economy. “We have hit the bottom economically,” said Nimal Jayantha, an autorickshaw driver queuing for petrol after the curfew was lifted.

“I don’t have the time to do my job. By the time I stay in the fuel queue and get petrol, the curfew will be imposed. I will have to go home without any money.”

Protesters have sprayed graffiti over Mahinda Rajapaksa’s home in a southern town and ransacked a museum dedicated to his father. They have vowed to keep up the protests until the president also quits.

Mahinda Rajapaksa stepped down after the fighting erupted and is in hiding in a military base in the northeast of the country. On Thursday, a magistrate’s court issued orders blocking him, his son Namal and other key allies from leaving the country, lawyers present at the hearing said.

“I personally will extend my fullest cooperation to any investigation that is taking place with regard to the unfortunate events that took place on Monday,” Namal Rajapaksa said in a tweet following the order.

“Neither my father nor myself have any intention to leave (Sri Lanka).”

The president has said he will appoint a new prime minister and cabinet this week “to prevent the country from falling into anarchy as well as to maintain the affairs of the government that have been halted”.

The Colombo stock market, closed for the last two days, ended over 3% up on Thursday on optimism over a new cabinet, traders said.

Sri Lanka’s central bank governor said on Wednesday failing to find a solution to the crisis in the next one to two weeks would lead to power cuts of up to 10 to 12 hours per day, as well as his own resignation.

President Rajapaksa has repeatedly called for a unity government to find a way out of the crisis, but opposition leaders say they will not serve until he resigns.

Hit hard by the pandemic, rising oil prices and tax cuts by the populist Rajapaksa government, the island nation is experiencing its worst financial crisis since independence in 1948.

Useable foreign reserves stand as low as $50m,  inflation is rampant, and shortages of fuel, medicine and other essential goods have brought thousands to the streets in more than a month of antigovernment protests that flared again on Monday.

Mahinda Rajapaksa’s departure, followed by his cabinet, to make way for a unity government came on a day of chaos and violence
World
1 week ago