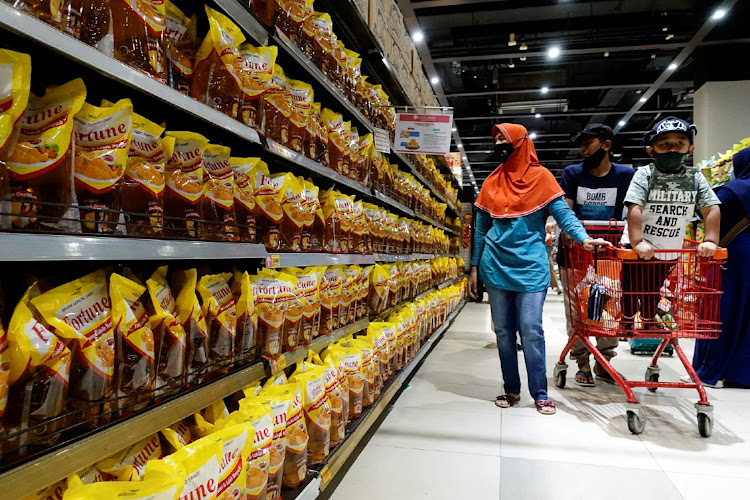 People shop for cooking oil made from oil palms at a supermarket in Jakarta, Indonesia, in this March 27 2022 file photo. Picture: REUTERSWILLY KURNIAWAN

Officials at the trade ministry and co-ordinating ministry of economic affairs did not immediately respond to requests for comment.

Traders were caught by surprise by Friday’s announcement by President Joko Widodo that Indonesia, the world’s biggest palm oil producer, is halting exports of the edible oil from April 28, to ensure domestic food product availability.

Though an exemption of crude palm oil from the export curbs will be positive for global markets, most of Indonesia’s palm exports are in the form of processed oils and remain affected by the ban.

Global edible oil supplies were already constrained by adverse weather and Russia’s invasion of major crop producer Ukraine, and now global consumers have no option but to pay top dollar for supplies at a time when global food inflation has soared to a record high.

Malaysian benchmark crude palm futures fell 2.09% after news that the ban will cover only RBD olein, having jumped nearly 7% to their highest in six weeks.

“The massive short covering fizzled out after hearing news that the ban only encompasses olein, both bulk and packed, from Indonesia,” said Paramalingam Supramaniam, director at Selangor-based brokerage Pelindung Bestari.

He said there are still concerns that crude palm oil will be added to the list of banned products as it is raw material for RBD palm olein.

According to Refinitiv Eikon, Indonesia exported an average of 620,000 tonnes per month of RBD in 2021, compared with an average of 100,000 tonnes of crude palm oil. Top destinations included India, Pakistan and Spain.

The government’s move to control stubbornly high cooking oil prices caused a slump in shares of its biggest palm oil companies on Monday, while the rupiah headed currency falls in Asia. Dollar-denominated bonds issued by Indonesia’s government fell more than 1c to their lowest since the 2020 Covid-19 market rout.

According to data from Indonesia’s palm oil association (GAPKI), exports of processed CPO in 2021 were 25.7-million tonnes, or 75% of total exports of palm products. CPO exports were 2.74-million tonnes in 2021, or 7.98% of the shipments.

Global prices of crude palm oil, which Indonesia uses for cooking oil, have surged to record highs this year amid rising demand and weak output from top producers Indonesia and Malaysia.

Iraq is the fifth most vulnerable country in the world to extreme temperatures and water shortages, according to the UN Environment Programme
World
2 months ago