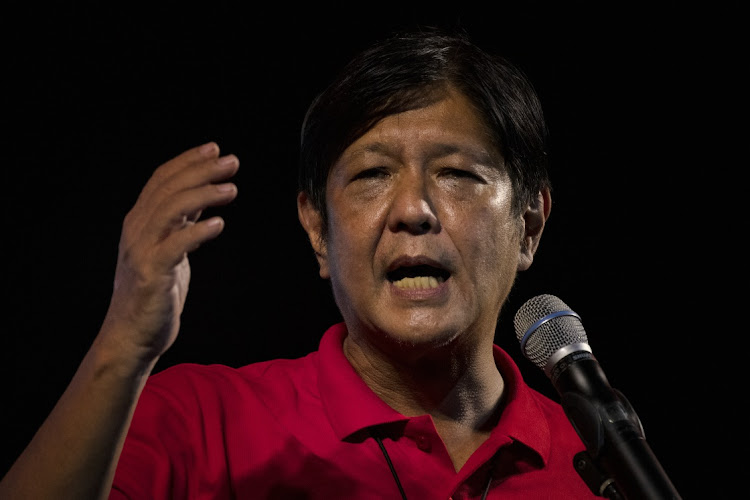 Ferdinand "Bongbong" Marcos Jr., the son of the late dictator Ferdinand Marcos, speaks during a rally as he campaigns for the presidency on February 19 2022 in Caloocan, Metro Manila, Philippines. Picture: GETTY IMAGES/EZRA ACAYAN

Manila — The presidential bid of Philippine election front-runner Ferdinand Marcos Jr received a boost on Tuesday after President Rodrigo Duterte’s political party endorsed his candidacy for the May 9 vote.

The PDP-Laban party, which has not fielded a presidential candidate, announced it will back Marcos, the son and namesake of the country’s late dictator, who is running alongside Duterte’s daughter, Davao city mayor Sara Duterte-Carpio.

Still, it remained unclear which candidate the popular Duterte would personally throw his support behind.

Marcos, commonly known as “Bongbong”, was the candidate “whose platform is most aligned with the development programme” of Duterte, read the resolution signed by members of the party belonging to a faction supported by the Philippine leader.

Cracks have appeared in the ruling party since last year as supporters of Duterte and another presidential candidate, Manny Pacquiao, have sought to wrest control.

Asked whether the party’s choice had Duterte’s blessing, party president Alfonso Cusi referred reporters to the president’s office. Presidential spokesperson Martin Andanar told a media briefing it was “not clear if this is also the preference of ... Duterte”.

“Forget about parties in our system. It is powerful families and influential politicians that count,” Rivera said, adding that PDP-Laban remained “very divided”.

Governor Ben Evardone, a close ally of Duterte and his party’s vice-president, announced he would back one of Marcos’s rivals, vice-president Leni Robredo. He did not sign the party resolution.

PDP-Laban was created to oppose the Marcos dictatorship, senator Aquilino Pimentel, leader of a faction in the party supporting retired boxing star Pacquiao, said in a statement.

Marcos enjoys a strong lead in the presidential election race, according to opinion polls, which also showed Duterte-Carpio as the top choice for vice-president.

In 2019, Cebu opted to move bathrooms and kitchens on some new Airbus A330neos to force in a record 460 seats, 20 over the recommended maximum
News
5 months ago