Test-firing of weapon, thought to be ballistic missile, prompts outrage from the country's southern neighbour and Japan 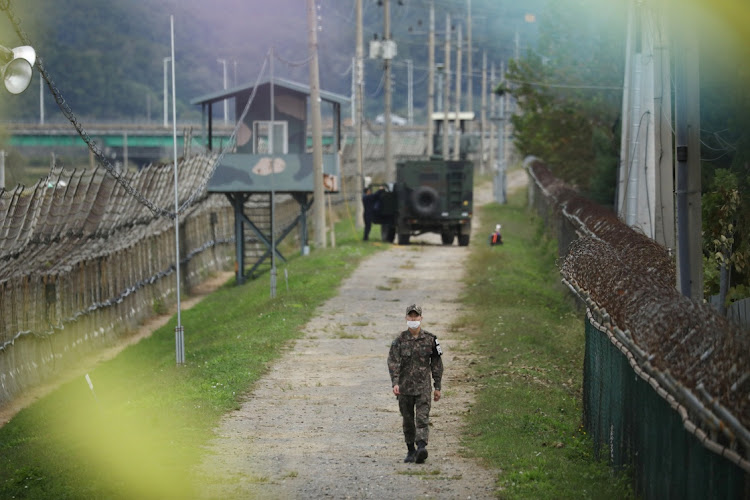 North Korea test-fired what appeared to be at least one ballistic missile just as its envoy was preparing to address the UN, in a pointed gesture of defiance against international resolutions meant to prevent such launches.

The projectile was fired from the northern province of Jagang at about 6.40am local time and landed in waters to the east, South Korea’s military said, without elaborating. The missile’s trajectory — rising about 30km into the atmosphere and falling 200km away — differed from previously known North Korean launches, the Yonhap News Agency reported, adding later that the military analysts were examining whether it was a new high-speed weapon.

South Korea’s National Security Council expressed “regret” over the launch while President Moon Jae-in ordered officials to analyse recent North Korean actions and prepare countermeasures. Japanese Prime Minister Yoshihide Suga confirmed that the launch appeared to be a ballistic missile, telling reporters the government was analysing details and “will step up its vigilance”.

The launch came just before Kim Jong Un’s envoy to the UN, Kim Song, spoke to the body’s annual General Assembly in New York. He used his time at the podium to repeat an often-used demand for the US to drop what Pyongyang sees as a hostile policy towards it.

Earlier this month, North Korea fired two short-range ballistic missiles from a train, in the country’s first violation since of March of UN Security Council resolutions barring such tests. North Korea has been engaged in a rhetorical tit-for-tat with Moon, after the South Korean leader conducted his own missile tests this month and used his UN speech to renew his call for a declaration formally ending the Korean War.

“It is possible that North Korea’s key objective was to see South Korea’s response to the launch today [Tuesday],” said Rachel Minyoung Lee, a non-resident fellow with the 38 North Programme at the Stimson Center. “North Korea wants to see how South Korea deals with North Korea’s latest statements and today’s launch is a good test.”

President Joe Biden’s administration has reiterated the US does not have hostile intent toward North Korea and urged Pyongyang to return to nuclear disarmament talks that have been stalled for more than two years.

Over the weekend, Kim Yo Jong, the North Korean leader’s sister, reached out to South Korea for the second time in as many days. She said that Pyongyang would consider taking part in another summit declaring an end to the 1950-53 war — if Seoul adopted a less hostile policy.

The launch from a train was a first for North Korea, which has been modernising its missile arsenal with solid-fuel rockets that are easier to hide and fire off in quick strikes. It has been building up its capabilities to strike the US mainland with nuclear warheads and deliver tactical strikes against South Korea and Japan, which host tens of thousands of American troops.

Kim Jong Un told a top ruling party meeting days before Biden came to office in January he was putting North Korea on a path to develop more advanced nuclear technologies and missiles. The plan included making smaller and lighter nuclear weapons and suggested a sweeping modernisation of the country’s nuclear and conventional forces.

In addition to the missile testing, North Korea appears to have restarted plutonium-production operations at its Yongbyon nuclear plant, a UN watchdog said. It’s also expanding a plant to enrich uranium at the facility, which could indicate it wants to ramp up production capacities of that fissile material.

The Yongbyon complex, which has served as the crown jewel of North Korea’s atomic programme, is an ageing facility about 100km north of Pyongyang that once was the only source of its fissile material. It churned out roughly enough plutonium each year for one atomic bomb.

Since then, North Korea has used uranium enrichment as the main source of fissile material for weapons, with nuclear experts saying the state can produce enough weapons-grade material for at least six nuclear bombs a year and has at least one more than enrichment plant outside Yongbyon.

North Korea’s UN envoy Kim Song told the body in New York that an improvement in ties with the US was possible. “I am convinced that positive prospects will open up for US-DPRK relations and inter-Korean relations if the US refrains from threatening the DPRK and gives up its hostility toward it,” said Kim, referring to his country by its formal name.