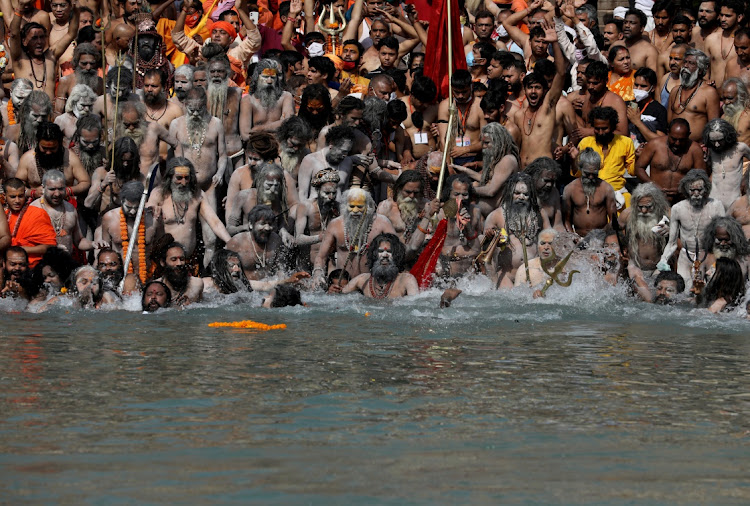 Haridwar —  Hundreds of thousands of ash-smeared ascetics and devout Hindus jostled to take a dip in the Ganges during a religious festival on Wednesday, hoping to wash away their sins, as India reported another record surge in coronavirus infections.

As huge crowds made their way towards the river on a special day of bathing during the weeks-long “Kumbh Mela” festival, health authorities had to pull back a Covid-19 testing crew.

“We have moved away our sampling team to avoid a stampede-like situation,” said SK Jha, chief medical officer of the northern city of Haridwar, where the event is being held. "We do, of course, expect cases to rise when the priests and other crowd move away.”

Police said 650,000 devotees had bathed in the river since Wednesday morning and people were being fined for failing to observe social distancing in some areas.

Infections in the city have already jumped to more than 500 a day since Kumbh Mela, or the pitcher festival, officially began this month, from just 25-30 in March, Jha said. Hotels have become isolation shelters for those found infected by a team of 300 medical staff running 40,000 random tests daily.

Prime Minister Narendra Modi's government, however, has refused to call off the festival that is scheduled to last the whole month, possibly fearing a backlash from religious leaders in the Hindu-majority country.

“It is already a super-spreader because there is no space to test hundreds of thousands in a crammed city and the government neither has the facilities nor the manpower,” said a senior official in Uttarakhand state, where Haridwar is located.

Devout Hindus believe bathing in the holy Ganges absolves people of sins, and during the Kumbh Mela, it brings salvation from the cycle of life and death.

A short distance from the river, Hotel Sachin International had converted itself into a Covid-19 isolation centre. All 72 rooms were packed with more than 150 patients, a hotel executive said.

“We started taking in patients on April 5, and three days ago all our rooms got filled,” the employee said, declining to be identified because of a gag order from local authorities.

The hotel did not respond to an e-mail seeking comment. A doctor from the region said at least four other hotels have been turned into Covid-19 wards.

“What you are seeing is not Kumbh Mela but it's a corona atom bomb,” tweeted Indian filmmaker Ram Gopal Varma, alongside a picture of a sea of devotees. “I wonder who will be made accountable for this viral explosion.”

The Games are approaching, but there is a Covid-19 resurgence in many countries
Opinion
3 weeks ago

That said, Britain is on track to offer all adults a vaccine by the end of July, but still expects a rise in cases as the economy opens up
World
3 weeks ago

As pandemic spirals out of control, charities scramble to feed Brazil's poor, and accuse state of underreporting virus deaths
World
3 weeks ago