Cases have soared 13-fold in less than two months as flouting of health protocols, even by politicians, has proved disastrous 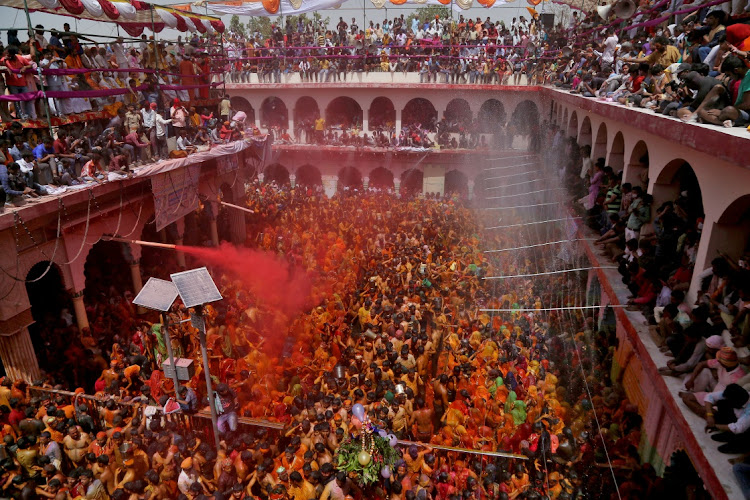 Hindu devotees take part in Huranga a day after Holi, the festival of colours, at Dauji temple near the northern city of Mathura, India, March 30 2021. Picture: REUTERS/KK ARORA

New Delhi — India’s Covid-19 cases have soared 13-fold in barely two months, a vicious second wave propelled by open disregard for safety protocols in much of the vast country.

Election rallies led by Prime Minister Narendra Modi and other major figures, as well as crowded festivals and religious gatherings, have characterised the record resurgence of the coronavirus.

After quelling the first surge late last year, India’s leaders let down their guard. Allowing or even encouraging dangerous behaviour, they underestimated the virus, reopening the economy too fast and too broadly, experts say.

With daily infections hitting a record 127,000 on Thursday, the most in the world and the third day this week over 100,000, the third-hardest hit country is soaring past its mid-September peak of about 98,000 cases a day.

Many of the nation’s 1.35-billion people ignored masks and social-distancing, while politicians, including Modi and interior minister Amit Shah, greeted hundreds of thousands of mostly maskless supporters at election rallies.

When daily infections fell below 10,000 in early February, some experts predicted India would see only a modest second wave at most.

“It was really premature to celebrate. This is a lesson,” said University of Michigan epidemiologist Bhramar Mukherjee, who leads a team of researchers modelling the trajectory of India’s outbreak. “The really treacherous thing about this virus is how silently it casts its footsteps. By the time you see the cases and deaths, the damage is done.”

“There have been elections, religious gatherings, reopening of offices, lots of people travelling, attending social functions, not following rules, little mask-wearing at functions such as weddings, even on crowded buses and trains,” he told a video conference.

Vardhan himself has faced criticism for tweeting dozens of images and videos of party rallies.

With 12.9-million cases, India remains close behind Brazil but well below the US, which has recorded more than 30-million infections. India’s Covid-19 deaths are above 166,000, though its fatality rate is one of the lowest in the world, partly because of its relatively young population.

On Thursday, New Zealand suspended entry for all travellers from India, including its own citizens, for about two weeks.

Authorities in India have imposed some curbs on movement, but federal ministers and industrialists have advised against another national lockdown. Last year’s curbs thrashed the economy and threw millions of poor people out of jobs. Instead, an increasing number of states are imposing local curbs, including night curfews in mega-cities such as Delhi and Mumbai.

Authorities have refused to call off a weeks-long Hindu festival, held once every 12 years on the banks of the Ganga river in the northern state of Uttarakhand. A successfully run Mahakumbh, which is expected to draw millions of devotees, is seen as crucial for the campaign of Modi’s Hindu nationalist party in the state, which votes next year.

Political parties have largely flouted Covid-19 rules during campaigns for multi-phase elections in four big states and one federal territory that started in March.

“Political leaders are themselves responsible” for the resurgence by allowing the packed rallies, said Subhash Salunke, a former World Health Organization official who advises the worst-hit state, Maharashtra. “The upward trend is going to remain for another couple of weeks.”

Shashank Tripathi, a professor at the Centre for Infectious Disease Research at the Indian Institute of Science in Bengaluru, said that even if most people are eventually exposed to the virus, “there is no guarantee that it will not come back and infect you again. The lesson is the same for any country”.

Epidemiologist and public health experts say the Covaxin approval was rushed, but efficacy data from a trial on 26,000 volunteers will be out soon
World
1 month ago
Next Article