Six labrador retrievers participated in a six-month project and take only one to two seconds to detect the virus, useful in areas such as transport hubs 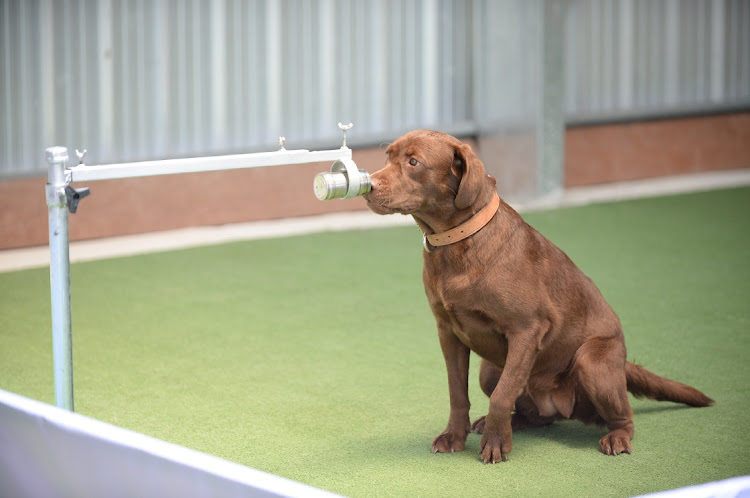 A dog during its training to detect Covid-19 in Songkhla, Thailand, March 3 2021. Picture: HANDOUT VIA REUTERS/CHEVRON THAILAND EXPLORATION AND PRODUCTION

Bangkok — Thai sniffer dogs trained to detect Covid-19 in human sweat proved nearly 95% accurate during training and could be used to identify coronavirus infections at busy transport hubs within seconds, the head of a pilot project said.

Six labrador retrievers participated in a six-month project that included unleashing them to test an infected patient’s sweat on a spinning wheel of six canned vessels.

“The dogs take only one to two seconds to detect the virus,” Prof Kaywalee Chatdarong, the leader of the project at the veterinary faculty of Thailand’s Chulalongkorn University, said. “Within a minute, they will manage to go through 60 samples.”

The dogs can detect a volatile organic compound secreted in the sweat of Covid-19 sufferers, even in the absence of disease symptoms, the Thai researcher said.

The dogs would not need to directly sniff people, but could screen samples of sweat, a task that should not be difficult in a tropical country such as Thailand, she said.

Chile, Finland and India are other countries that have also launched efforts to get sniffer dogs to detect the virus, with a German veterinary clinic saying in February its sniffer dogs had achieved 94% detection accuracy in human saliva.

“The next step is to put them out in the field,” said Kaywalee. “In the future, when we send them to airports or ports, where there is an influx of commuters, they will be much faster and more precise in detecting the virus than temperature checks.”

Thailand has been relatively successful in containing the virus, with a new wave of infections in the first two months of the year now leveling off and after recording 88 deaths.

The Southeast Asian country has also started vaccinating front-line health workers and hopes to find a way to let visitors return in greater numbers after its tourism-dependent economy was battered by the pandemic.

The novel coronavirus mutates about once every two weeks — slower than influenza or HIV, but enough to require tweaks to vaccines
World
6 months ago

Thai firms are investing in cannabis, seeking to be first movers in a budding multi-billion dollar industry in Asia
World
6 months ago
Next Article