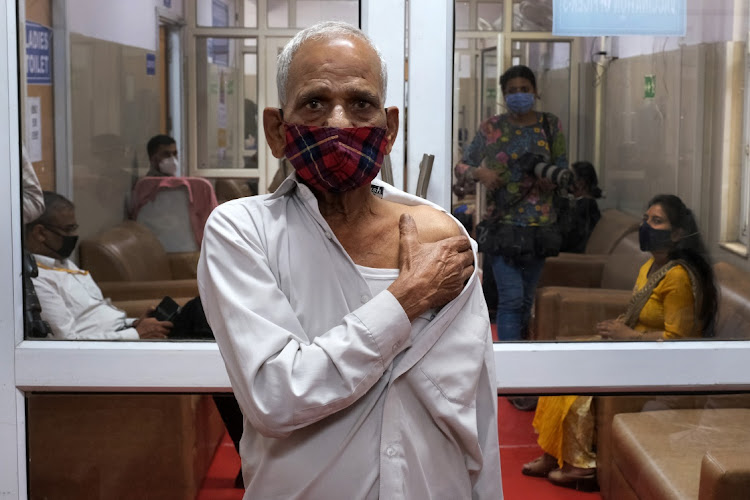 Senior citizens wait in the observation room after receiving the Covishield vaccine, developed by AstraZeneca and the University of Oxford and manufactured by Serum Institute of India, at Rajiv Gandhi Super Speciality Hospital in New Delhi, India, on Monday, March 1. Picture: BLOOMBERG/T.NARAYAN

Rivals China and India have both sold or given Covid-19 shots to many countries. India produces more than 60% of all vaccines sold in the world.

Goldman Sachs-backed Cyfirma, based in Singapore and Tokyo, said Chinese hacking group APT10, also known as Stone Panda, had identified gaps and vulnerabilities in the IT infrastructure and supply chain software of Bharat Biotech and the Serum Institute of India (SII), the world’s largest vaccine maker.

He said APT10 is actively targeting SII, which is making the AstraZeneca vaccine for many countries and will soon start bulk-manufacturing Novavax shots.

“In the case of Serum Institute, they have found a number of their public servers running weak web servers — these are vulnerable web servers,” Ritesh said, referring to the hackers.

“They have spoken about weak web application, they are also talking about a weak content-management system. It’s quite alarming.”

China’s foreign ministry did not immediately reply to a request for comment. SII and Bharat Biotech declined to comment. The government-run Indian Computer Emergency Response Team, with whom Cyfirma said it had shared its findings, had no immediate comment.

The US justice department said in 2018 that APT10 had acted in association with the Chinese ministry of state security.

Microsoft has said it had detected cyberattacks from Russia and North Korea targeting Covid-19 vaccine companies in India, Canada, France, South Korea and the US. North Korean hackers also tried to break into the systems of British drugmaker AstraZeneca.

Ritesh, whose firm follows the activities of about 750 cybercriminals and monitors nearly 2,000 hacking campaigns using a tool called decipher, said it was not yet clear what vaccine-related information APT10 may have accessed from the Indian companies.

Bharat Biotech’s Covaxin shot, developed with the state-run Indian Council of Medical Research, will be exported to many countries, including Brazil.

US drugmaker Pfizer and its German partner BioNTech said in December that documents related to the development of their Covid-19 vaccine had been “unlawfully accessed” in a cyberattack on Europe’s medicines regulator.

If the panel votes that the vaccine’s benefits outweigh its risks, as expected, the agency could grant emergency clearance within days
World
10 months ago

The European Commission has yet to decide on what such a passport may entail, but note that if they don’t do something other parties will
World
10 months ago

Epidemiologist and public health experts say the Covaxin approval was rushed, but efficacy data from a trial on 26,000 volunteers will be out soon
World
10 months ago
Next Article