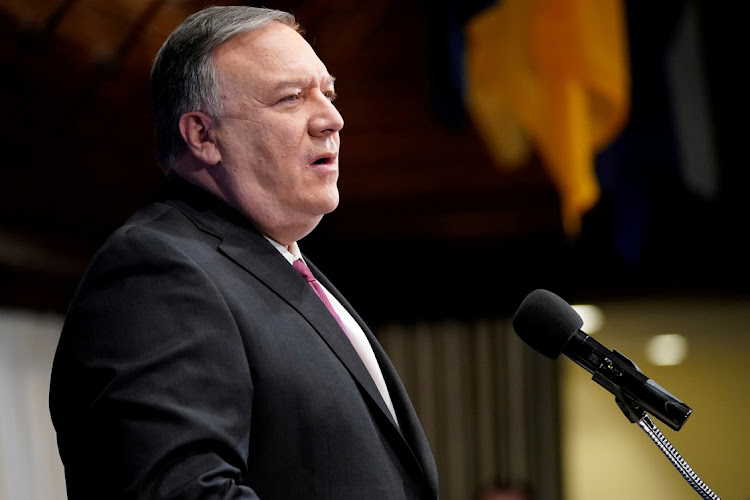 China imposed sanctions on former secretary of state Michael Pompeo and other Trump administration officials just as Joe Biden was being inaugurated as president, hitting back at the outgoing team while leaving open the possibility of warmer ties with their successors.

Also on the list of 28 people being sanctioned were former President Donald Trump’s National Security Adviser Robert O’Brien and his deputy Matt Pottinger, trade adviser Peter Navarro, and US ambassador to the UN Kelly Craft, according to a statement issued on Wednesday by China’s foreign ministry as the inauguration for Biden was taking place. They and their families will be banned from entering China, Hong Kong or Macau, or doing business with China.

The officials listed were instrumental in shaping the Trump administration’s more confrontational stance towards China, which included a raft of sanctions and a declaration, on its final day, that the government had committed genocide in its Xinjiang region. Also on the list were former Trump adviser Steve Bannon and former national security adviser John Bolton.

The officials “planned, promoted and executed a series of crazy moves which have gravely interfered in China’s internal affairs, undermined China’s interests, offended the Chinese people, and seriously disrupted China-U. S. relations,” the foreign ministry said in a statement.

The statement didn’t list all the people affected by the restrictions.

Though Biden and his team are unlikely to match the harsh rhetoric levelled by Pompeo and other Trump administration officials, they have indicated they aren’t ready to ease tensions as much as China’s leaders would want.

Retired Gen Lloyd Austin, Biden’s nominee for defence secretary, said in a written submission for his confirmation hearing on Tuesday that the new administration “will view China as our most serious global competitor and, from a defence perspective, the pacing threat in most areas”.

The same day, Biden’s pick for secretary of state, Antony Blinken, said at his hearing that China is “the most significant challenge of any nation state to the US  in terms of our interests, the interests of the American people”.

But he said he saw some room for co-operation “when it is in our mutual interest”. Biden’s transition team has said it hopes to forge some agreement with China on climate change and nuclear arms control.

Those targeted by China’s sanctions on Wednesday are likely to wear the restrictions as a badge of honour. Pompeo, who railed against China in a string of tweets in recent days, may boast of his tough stance in a future political campaign.

“I’ve been sanctioned by the Communist Chinese government for ‘nasty behaviour’,” Bolton tweeted on Wednesday. “Great news for an inauguration day! I accept this prestigious recognition of my unrelenting efforts to defend American freedom.”

It’s not the first time China has sanctioned top US officials. In July, the country announced sanctions on Republican senators Marco Rubio, Ted Cruz and other officials over what the foreign ministry said was interference in China’s internal affairs.

Cyril Ramaphosa should set a new tone in relations with the US, and siding with unsavoury governments is not the way to do it
Opinion
3 months ago

If US president-elect Joe Biden doesn’t reverse the move, US investors will be prohibited from buying securities of companies on blacklist
World
3 months ago
Next Article

This is who cracked Donald Trump’s list of pardons

This is who cracked Donald Trump’s list of pardons