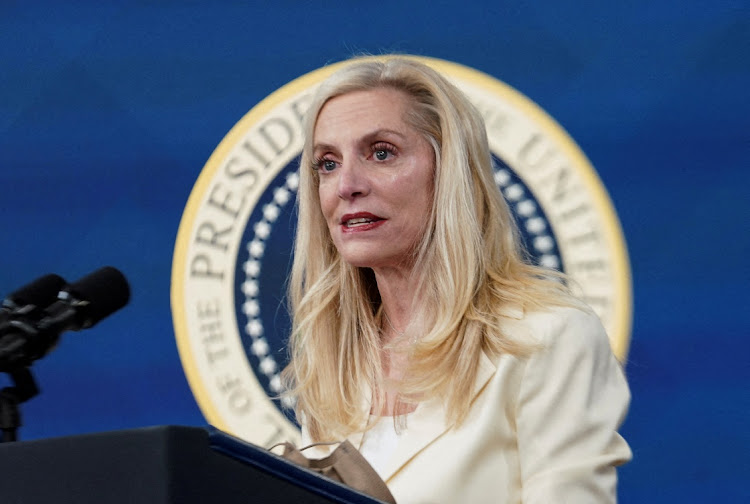 US Federal Reserve governor Lael Brainard speaks at the White House in Washington, the US, November 22 2021.Picture: KEVIN LAMARQUE/ REUTERS

Federal Reserve governor Lael Brainard on Tuesday said she expects a combination of interest rate increases and a rapid balance sheet runoff to bring US monetary policy to a “more neutral position” later in 2022, with further tightening to follow as needed.

The Fed on Wednesday releases minutes of its March meeting that are expected to provide fresh details on its plans to reduce its bond holdings, and Brainard’s remarks provided a bit of a preview.

“I think we can all absolutely agree inflation is too high and bringing inflation down is of paramount importance,” Brainard said at a conference at the Minneapolis Fed.

To do so, she said, the Fed will raise rates “methodically” and, as soon as next month, begin to reduce its nearly $9-trillion balance sheet, quickly arriving at a “considerably” more rapid pace of runoff than the last time the Fed shrank its holdings.

The rapid portfolio reductions “will contribute to monetary policy tightening over and above the expected increases in the policy rate reflected in market pricing and the Committee’s Summary of Economic Projections,” she said.

The hawkish tone from one of the Fed's usually more dovish policymakers sent stocks down and Treasury yields up to multiyear highs, as investors digested the implications of a more aggressive policy path.

Investors are concerned by “the speed and aggressiveness of the Fed with its balance sheet reductions,” said CFRA Research's Sam Stovall.

The Fed raised rates last month for the first time in three years, and released projections showing most policymakers thought the policy rate would end the year at least in the range of 1.75%-2%, if not higher. That would require quarter-point rate increases at all six remaining Fed meeting this year.

Markets see the Fed moving faster, delivering half-point rate hikes in May, June and July, to bring the rate to 2.5%-2.75% by the end of this year. Most policymakers view 2.4% as a “neutral” level, above which borrowing costs start to reduce growth.

Back then, the Fed began by limiting runoff from its $4.5-trillion balance sheet to $10bn a month, and took a year to ramp that up to a maximum of $50bn a month. Analysts expect a pace about twice that this time around.

The Fed targets 2% inflation, as measured by the personal consumption expenditures price index. In February the PCE price index was up 6.4% from a year earlier, and Brainard said she sees risks of it rising further, as Russia’s invasion of Ukraine pushes up gas and food prices, and Covid-19 lockdowns in China worsen supply chain bottlenecks.

And though the geopolitical events could pose risks to growth, she noted, the USeconomy has considerable momentum and the labor market is strong, with unemployment now at 3.6%, just a hair above its pre-pandemic level.

The Fed’s signalling on policy has already tightened financial conditions, Brainard said, with mortgage rates up a full percentage point in the past few months.

“We are prepared to take stronger action” if warranted by readings on inflation or inflation expectations, Brainard said, adding that she would also be watching the yield curve for any signs of downside risks to the economy.

It was unclear from Brainard’s remarks whether she feels a rapid portfolio reduction would render bigger-than-usual rate hikes unnecessary.

“I think 50 basis points is going to be an option that we’ll have to consider, along with other things,” George told Bloomberg TV on Tuesday.

If the Fed does raise rates as fast as markets now predict, that would mark at least for a few months the fastest pace of policy tightening in decades.

Fed chair Jerome Powell says he believes the Fed can manage a “soft landing,” where the central bank raises borrowing costs enough to slow the economy and bring inflation down, but not enough to send unemployment surging or push the economy into recession.

Economists say that will be difficult, if not impossible: in a recent paper Harvard University’s Larry Summers noted that since 1955 there has never been a time when wage growth exceeded 5% and the unemployment rate was below 5% that was not followed within two years by a recession.

Hourly wages for non-managerial employees rose 6.7% from a year earlier in each of January, February and March, labor department data show.

Fed officials argue however that past is not necessarily prelude. For one thing, workers are already coming off the labor market sidelines as the pandemic eases, and more of that trend could ease wage pressures.

For another, the US is a net oil exporter, so rising energy prices won't slow the economy as much as they did in the 1970s, making stagflation less likely.

As the Fed tightens policy to fight inflation, she said, “we could slow so it looks like we are teetering close to it, that's possible, but it will be a short-lived event I expect, and then we'll be back up”.

US labour market is very strong and inflation  much too high,  says Federal Reserve head
World
4 months ago

Policymakers led by chair Jerome Powell voted 8-1 to lift  key rate to a target range of 0.25% to 0.5% amid surging inflation
News
4 months ago