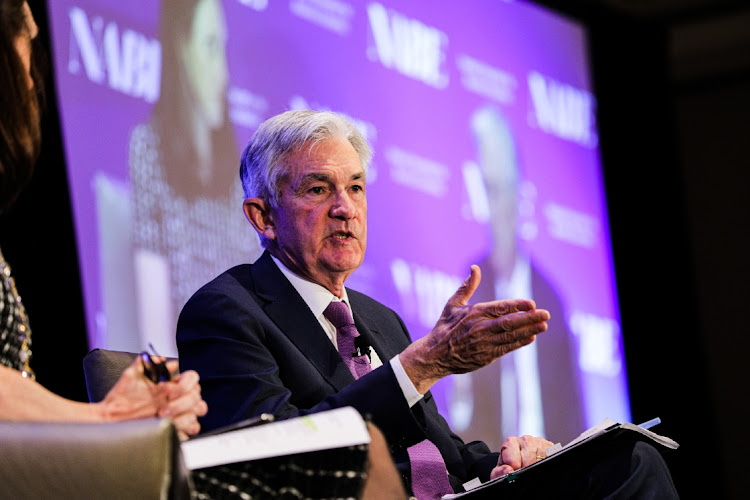 The US central bank must move "expeditiously" to bring too-high inflation to heel, Federal Reserve chair Jerome Powell said on Monday, and will, if needed, use bigger-than-usual interest rate hikes to do so.

"The labour market is very strong, and inflation is much too high," Powell told a National Association for Business Economics conference. "There is an obvious need to move expeditiously to return the stance of monetary policy to a more neutral level, and then to move to more restrictive levels if that is what is required to restore price stability."

In particular, he added, "if we conclude that it is appropriate to move more aggressively by raising the federal funds rate by more than 25 basis points at a meeting or meetings, we will do so."

Fed policymakers last week raised interest rates for the first time in three years and signalled ongoing rate hikes ahead. Most see the short-term policy rate —  pinned for two years near zero — at 1.9% by the end of 2022, a pace that could be achieved with quarter-percentage-point increases at each of their next six policy meetings.

By the end of next year, Fed policymakers expect the central bank's benchmark overnight interest rate to be at 2.8%, bringing borrowing costs to a level where they would actually start biting into growth. Most Fed policymakers see the "neutral" level as somewhere between 2.25% and 2.5%.

Powell repeated on Monday that the Fed's reductions to its massive balance sheet could start by May, a process that could further tighten financial conditions.

US stocks extended earlier losses after his remarks and traders boosted bets that the Fed will deliver a half-percentage-point rate hike at its policy meeting in May.

"This is not just going to be a near-term tactical phenomenon," said Kevin Flanagan, head of fixed income strategy at WisdomTree Investments in New York. "This is a more strategic type of messaging, I think, from the Fed."

A consensus for more aggressive tightening — or at least an openness to it — appears to be growing.

Atlanta Fed president Raphael Bostic, who expects a slightly gentler path of rate increases than most of his colleagues, said earlier on Monday he is open to bigger-than-usual rate hikes "if that’s what the data suggests is appropriate."

Speaking on Friday, Fed governor Chris Waller said he would favour a series of half-percentage point rate increases to have a quicker impact on inflation.

The US unemployment rate currently is at 3.8% and per-person job vacancies are at a record high, a combination that's pushing up wages faster than is sustainable.

"There’s excess demand," Powell said, adding that "in principle" less accommodative monetary policy could reduce pressure in the labor market and help stabilize inflation without pushing up unemployment, generating a "soft landing" rather than a recession.

Inflation by the Fed’s preferred gauge is three times the central bank's 2% goal, pushed upward by snarled supply chains that have taken longer to fix than most had expected and that could get worse as China responds to new Covid-19 surges with fresh lockdowns.

Adding to the pressure on prices, Russia's war in Ukraine is pushing up the cost of oil, threatening to move inflation even higher. The US, now the world's biggest oil producer, is better able to withstand an oil shock now than in the 1970s, Powell noted.

Although the Fed in normal times would not likely tighten monetary policy to address what in the end may be a temporary spike in commodity prices, Powell said, "the risk is rising that an extended period of high inflation could push longer-term expectations uncomfortably higher".

Last year, the Fed repeatedly forecast that supply chain pressures would ease and then was repeatedly disappointed.

"As we set policy, we will be looking to actual progress on these issues and not assuming significant near-term supply-side relief," Powell said on Monday. Policymakers began this year expecting inflation would peak this quarter and cool in the second half of the year.

"That story has already fallen apart," Powell said. "To the extent it continues to fall apart, my colleagues and I may well reach the conclusion we'll need to move more quickly and, if so, we'll do so."

Fed policymakers hope to rein in inflation without stomping on growth or sending unemployment back up, and their forecasts released last week suggest they see a path for that, with the median view for inflation falling to 2.3% by 2024 but unemployment still at 3.6%.

Powell said he expects inflation to fall to "near 2%" over the next three years, and that while a "soft landing" may not be straightforward, there is plenty of historical precedent.

"The economy is very strong and is well-positioned to handle tighter monetary policy," he said.

ISAAH MHLANGA: The Reserve Bank must raise interest rates — but how high and how fast?

The Reserve Bank’s monetary policy committee (MPC) meeting on interest rates this week will be one of the most difficult since the pandemic started. ...
Opinion
3 months ago

Interest rate hikes on the cards this week, followed by higher fuel prices and rising inflation

Consumers are bracing themselves for an increase in interest rates this week - the second hike this year - as the war in Ukraine pushes fuel prices ...
Business
3 months ago

The Federal Reserve kicked off a a series of interest rate hikes that’s set to be the most aggressive since the mid-2000s, as chair Jerome Powell ...
Business
3 months ago

Global oil prices have soared since the last MPC meeting in late January, potentially threatening the outlook on consumer inflation
Economy
3 months ago
Next Article