Mexico logged 117 landslide alerts in 2020, and official studies identify large swathes of Mexico as prone to landslides and flooding 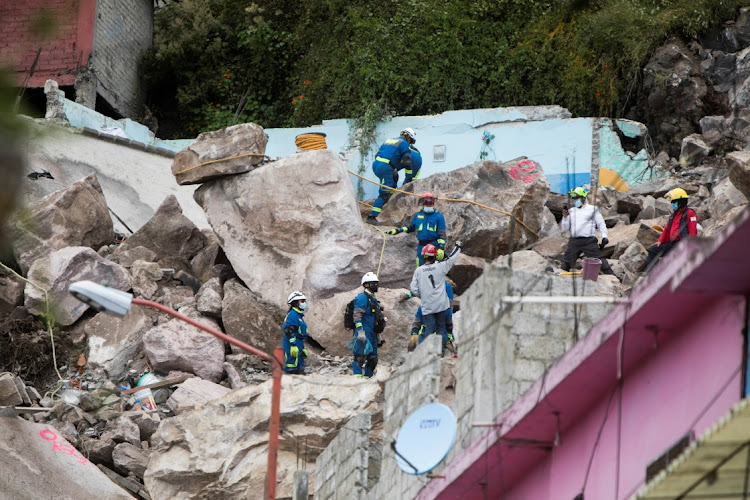 Rescue workers inspect an area damaged by a landslide, caused by heavy rains and an earthquake that loosened the hillside, at the Cerro del Chiquihuite, in the municipality of Tlalnepantla de Baz, Mexico on September 12 2021. Picture: REUTERS/LUIS CORTES

Mexico City — The landslide that hit the Cerro del Chiquihuite hill on the edge of Mexico City on September 10 buried Eustacia Angel Valentin's home and three other houses, killing four people and forcing more than 140 families to relocate.

It was just one of scores of natural disasters to strike Mexico in the past few years, exacerbated by urban growth and extreme meteorological conditions, which are becoming more commonplace due to climate change, scientific studies show.

Two of the three most active Atlantic hurricane seasons on record have been in the past two years, displacing thousands of people from Mexico and Central America.

Valentin said she saw the landslide coming after heavy rains and an earthquake loosened the hillside.

Frightened by rocks tumbling onto her home for days, she decided to pack an emergency bag before leaving for work. Later, she saw television images of the house buried under rubble.

“It’s really sad, because I carried all the material to build my house myself,” Valentin said. “But like I tell [my children], materials come and go, but a life? No.”

A few days before Valentin’s house was destroyed, severe flooding caused by heavy rain northeast of the capital caused the deaths of 17 people at a hospital in the state of Hidalgo.

Ignacio Quintanar, a researcher at the Center for Atmospheric studies at the Autonomous University of Mexico, said extreme rainfall in Mexico has increased partially due to human factors, concentrating its impact in more vulnerable areas.

Since 2000, 92% of Mexico's disaster, emergency and climate contingency declarations, and 78% of damage caused by natural disasters have been hydrometeorological, official data.

Mexico logged 117 landslide alerts in 2020, the most in a decade. Meanwhile, rain-related warnings registered by disaster agency CENAPRED nearly doubled during 2010-2019 from the prior decade. The agency's public data is approximate because some alerts register multiple times during prolonged major disasters.

Official studies identify large swathes of Mexico as prone to landslides and flooding, including where Valentin lived.

President Andres Manuel Lopez Obrador vowed to relocate the families displaced by the landslide, and said corruption in past governments led to plots in dangerous areas being sold.

He said in October the practice was no longer allowed, but noted the problem still existed in some places.

“The mayors and municipalities have the right to determine use of land and give construction permits,” said Rafael Marin, director of Mexico City's civil protection risk management. “That ties our hands.”

Valentin looked up at the rubble-strewn hillside where the home she lived in for 30 years and raised her children once stood. She said she had no idea it was in a high risk area before its destruction.

“We had a legal plot, all of our papers were in order,” she said. “I left a lot of memories up there.”

Many see it as a referendum on Lopez Obrador, his expansion of the state’s role in energy industry and his erosion of institutional checks and ...
World
1 year ago

Producers who grow the delicate arabica beans are increasingly giving up, joining migrant flow to the US
World
6 months ago
Next Article