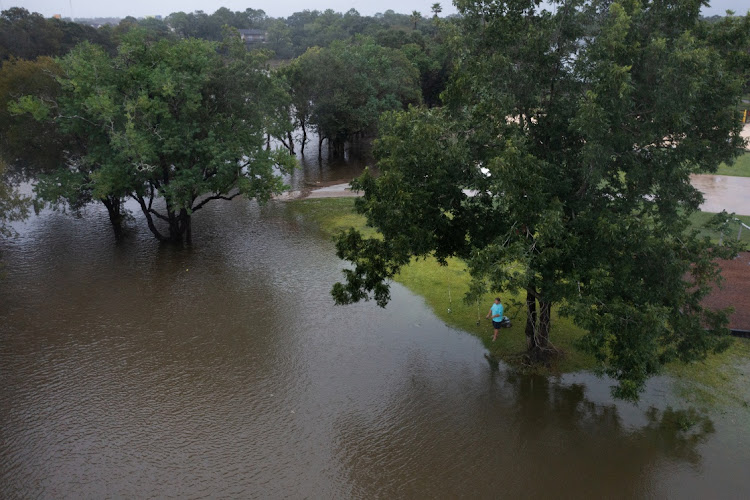 A man fishes under a tree as flood waters surround a neighbourhood in the aftermath of Hurricane Nicholas in League City, Texas, U.S., September 14 2021. Picture: REUTERS/ADREES LATIF

Storm Nicholas is lashing the US Gulf Coast with torrential rain that could last for days, knocking out power, unleashing floods and dealing another blow to the energy industry just two weeks after Hurricane Ida.

The storm, now classified as a tropical depression, is moving across the southeastern edge of Texas and into Louisiana, with maximum sustained winds of 45km/h, the National Hurricane Center said in its most recent public advisory. It is expected to pose a danger as it drags across the region, before dissipating on  Thursday night or Friday local time.

“Essentially it is a very slow crawl to the east-northeast and given that it is going so slow, life-threatening flash flooding could occur over the northern Gulf Coast for the next couple of days,” said Lara Pagano, a senior branch forecaster at the US Weather Prediction Center. “We just have multiple rounds of heavy rains that will be moving through the area.”

Nicholas made landfall in Texas early on Tuesday morning southwest of Houston and is the eighth tropical cyclone to hit the US in 2021. It is battering a region that was already reeling from Ida, with about 40% of Gulf of Mexico oil production still shut-in following that storm, according to the latest update, on Tuesday.

The largest pipeline in North America has restarted shipments of fuel from Texas to the East Coast, though its diesel twin was still down after winds knocked out power to almost half a million homes and businesses. The blackouts also crippled operations at a natural gas export terminal about 110km south of Houston.

The storm is expected to bring an additional 7cm-15cm of rain across the central Gulf Coast through Friday, with as much as 25cm possible in some areas, according to the National Hurricane Center. “Life-threatening flash flooding impacts, especially in urban areas,” is possible, it said.

Nicholas is soaking the region as climate change increases the intensity of disasters, from storms and hurricanes to wildfires. At least 80 people were killed after Ida hit coastal Louisiana and headed northeast earlier in September and wildfires have burnt large swathes of the US west in 2021.

Almost 117,000 homes and businesses were without power on Wednesday morning in Texas — mostly in Houston and nearby counties — down from a high of 520,000, according to PowerOutage.US, which tracks utility outages.

The blackouts forced Colonial Pipeline early on Tuesday to temporarily shut two pipelines, both of which are critical fuel conduits from the US Gulf Coast to the northeast. Freeport LNG said all three production units at its liquefied natural gas export terminal near Houston were down, likely due to an electricity disruption.

Nicholas is the Atlantic’s 14th storm in 2021. Half of the storms so far have hit the US, and Ida was the season’s worst, crashing into the Louisiana coastline before devastating New York with rain and floods. On Monday, AIR Worldwide updated its projected losses from Ida, saying the storm probably caused $20bn-$30bn in insured losses. Earlier estimates were about $18bn.

An average Atlantic season produces 14 storms by the time it ends in November, so 2021 is ahead of pace.

At the same time, the International Energy Agency is forecasting a big demand rebound for the rest of 2021
Markets
2 days ago