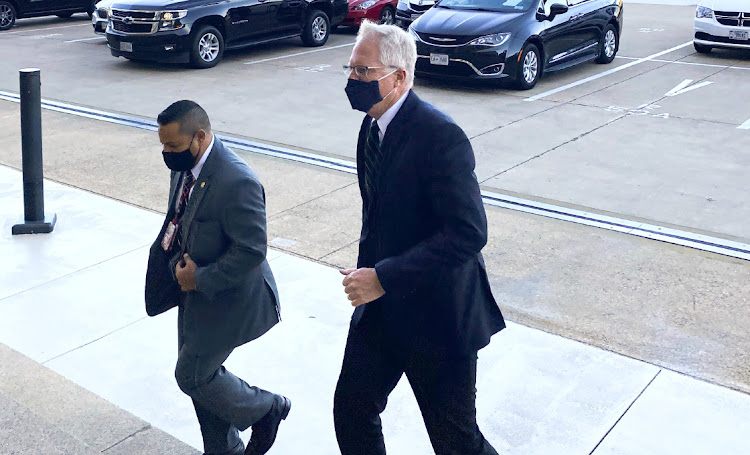 Christopher Miller, currently director of the National Counterterrorism Center, arrives at the Pentagon shortly after US President Donald Trump announced that Miller will become acting US secretary of defence in Washington, the US, November 9 2020. Picture: REUTERS/IDREES ALI

Washington — Sweeping changes in the Pentagon’s top ranks are under way as President Donald Trump elevates allies in moves that critics say sends a signal of turmoil in the leadership of the US military just after a contentious election.

A day after Trump fired Pentagon chief Mark Esper by tweet, two senior officials stepped down on Tuesday as did Esper’s former chief of staff. James Anderson, the acting deputy under secretary of defence for policy, did not give a reason for his departure in a resignation letter to the president, but praised policies put in place during the Trump administration. He had been in his current post only since June.

Later in the day, the Pentagon said undersecretary of defence for intelligence and security Joseph Kernan resigned in what he called a planned departure. In an e-mail to staff, Kernan said “I leave knowing that our efforts will continue given your unrelenting dedication to the security of this nation.”

Reports said the deputy chief of staff to the undersecretary of defence Mark Tomb had been ousted.

Kernan was replaced in an acting capacity by Ezra Cohen-Watnick, a Trump aide who worked with former national security adviser Michael Flynn before being forced out of the National Security Council in 2017. Cohen-Watnick, a friend of Trump son-in-law Jared Kushner, went on to work at Oracle, returned to the Trump administration to a position at the justice department and played a role in the impeachment saga.

Anderson, meanwhile, was poised to be replaced by his acting deputy, Brig Gen Anthony Tata. Trump had picked Tata for the undersecretary role in June, but his nomination foundered amid controversy over his past remarks, including derogatory comments about Islam.

Beyond Esper, who had a fraught relationship with the White House for months, it was not  immediately clear why there was so much changeover taking place at the Pentagon just one week after the US election, with Trump contesting the results. White House officials did not  immediately respond to a request for comment on the changes.

Even though Anderson and Kernan appeared to play down the moves in departure letters, critics said it was a bad signal to US rivals abroad.

“It is hard to overstate just how dangerous high-level turnover at the department of defence is during a period of presidential transition,” Democratic Representative Adam Smith, chair of the house armed services committee, said in a statement. He warned that the moves could mark “the beginning of a process of gutting the [department] — something that should alarm all Americans.”

The turmoil at the Pentagon comes at a delicate time, with Joe Biden having won the November 3 election but Trump continuing to claim widespread but unsubstantiated charges of voting fraud that he says means he won the election.

Trump dismissed Esper by tweet on Monday without explanation, with the president saying only that “I would like to thank him for his service”. But the president had long bristled at Esper’s failure to be more supportive of him publicly.

Trump appointed Christopher Miller, the director of the National Counterterrorism Center, as acting Pentagon chief. As a result of that change, White House National Security Council staffer Kash Patel, moved to the Pentagon as Miller’s chief of staff.

Both Patel and Cohen-Watnick have close ties to Republican Devin Nunes, who helped lead opposition to the FBI and special counsel Robert Mueller’s probe of Russia’s role in the 2016 election as chair of the House intelligence committee.

Peter Feaver, a professor at Duke University who specialises in civil-military relations, said there are three likely explanations for the flurry of moves. Those include Trump “settling scores” in the final weeks of his tenure, the president “wanting to do certain reckless policy steps like declassifying information and hastening the withdrawal of troops in Afghanistan” or, lastly, lower-ranking people in Trump’s orbit moving to “pad their resume before being forced out into the job market”.

Trump has declined to concede the election to Biden, instead lodging lawsuits in pivotal states alleging voting fraud
World
10 months ago

Bankruptcy, his hotels empty due to Covid-19, possible tax fraud and sexual assault accusations — these are a few of Donald Trump’s fevered fears
Opinion
10 months ago