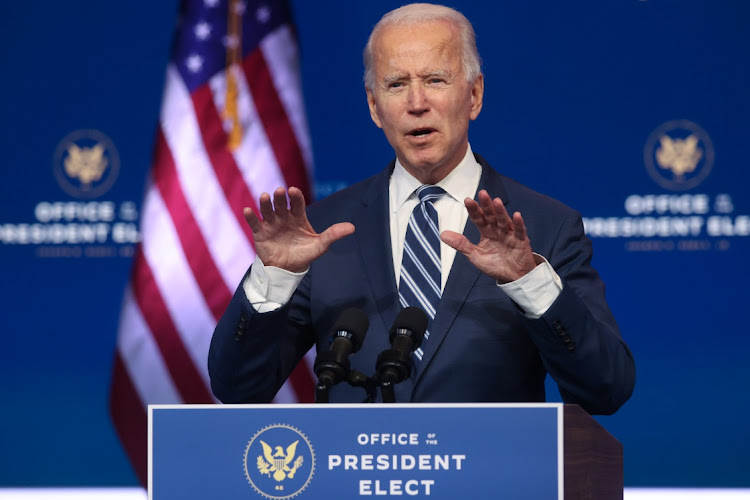 US president-elect Joe Biden speaks about health care and the Affordable Care Act (Obamacare) during a brief news conference in Wilmington, Delaware, the US, November 10 2020. Picture: REUTERS/JONATHAN ERNST

Wilmington — President-elect Joe Biden on Tuesday called President Donald Trump’s refusal to concede the election an embarrassment and vowed to go forward with the transition of power regardless of Republicans’ efforts to challenge the results.

“I just think it’s an embarrassment, quite frankly,” Biden  said in Wilmington, Delaware. “How can I say this tactfully? I think it will not help the president’s legacy.”

Asked if he had something to say to Trump, Biden replied, “Mr President, I look forward to speaking with you.”

The failure of the administration to co-operate with his transition “does not change the dynamic at all of what we’re able to do”, he said.

He also said he has not been receiving the presidential daily brief from the intelligence community as a president-elect would normally get because the administration did not recognise the transition and give him access to secure facilities.

“We’re going to be moving along in a consistent manner, putting together our administration,” he said. “Nothing’s going to stop that.”

​ “I'm letting them know that America is back. We're going to be back in the game.”

Biden also promised  to defend the Affordable Care Act, known as Obamacare, hours after the Trump administration argued before the US supreme court that the law should be struck down.

“These ideologues are once again trying to strip health coverage away from millions of people,” he said of Republican legislators.

He said his incoming administration would start in January to work with Congress to increase protections for coverage.

“We will not abandon you. That is a promise,” Biden said.

Chief justice John Roberts and fellow conservative Brett Kavanaugh indicated scepticism during the two hours of arguments in the case that the entire law must fall if a single key provision, called the individual mandate, is deemed unconstitutional.

About 20-million people could lose their health insurance and more than 135-million Americans with pre-existing conditions, including those who have had Covid-19, could lose their legal protections, according to estimates from the liberal Center for American Progress.

Derogatory Trump will be gone, but a Biden administration will know that the continent is a new theatre of geopolitical competition
Opinion
8 months ago
Next Article