I am yet to meet an American who understands cricket, but I’m willing to bet that if the Republicans were introduced to DLS they would grab onto it with both hands 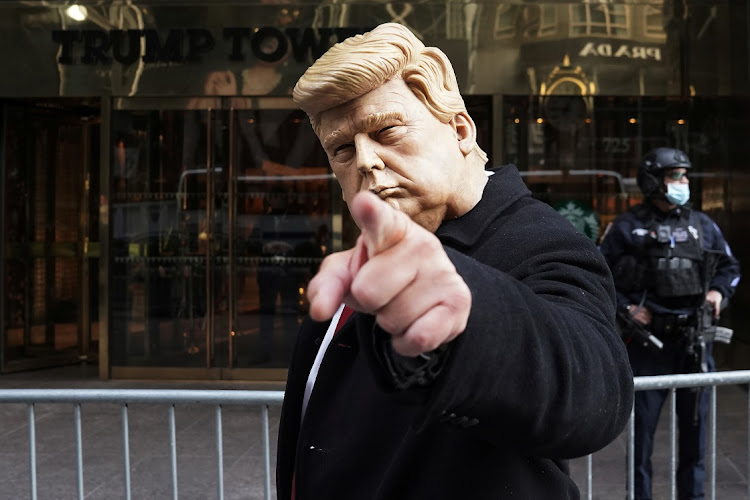 A man dressed as US President Donald Trump imitates him as he walks around Trump Tower on Election Day in Manhattan, New York. Picture: REUTERS/Carlo Allegri

Someone quipped on social media as the US election vote count dragged on: “Finally Americans are learning about the exquisite agony of five-day Test cricket.”

We can only be grateful that nobody has told Donald Trump about the Duckworth-Lewis method of calculating a winner if play is impeded in any way. It’s a mathematical formulation designed to calculate the target score for the team batting second in a limited-overs cricket match interrupted by weather or other circumstances.

The method was devised by two English statisticians, Frank Duckworth and Tony Lewis, and was officially adopted by the International Cricket Council in 1999.

It is as bewildering as the American electoral system, which relies not on the quantum of votes a candidate receives in the popular vote, but on how many Electoral College seats they win. It’s why George W Bush was able to prevail against Al Gore in 2000 and Trump came to office in 2016, despite Hillary Clinton garnering 3-million more votes than he did.

When Duckworth and Lewis retired, the name Stern was added to the method in November 2014. It’s now the Duckworth-Lewis-Stern (DLS) method.

Here’s how it is explained on Wikipedia: “When overs are lost, setting an adjusted target for the team batting second is not as simple as reducing the run target proportionally to the loss in overs, because a team with 10 wickets in hand and 25 overs to bat can play more aggressively than if they had 10 wickets and a full 50 overs, for example, and can consequently achieve a higher run rate. The DLS method is an attempt to set a statistically fair target for the second team’s innings, which is the same difficulty as the original target. The basic principle is that each team in a limited-overs match has two resources available with which to score runs (overs to play and wickets remaining), and the target is adjusted proportionally to the change in the combination of these two resources.”

It’s enough to fry your brain. And it’s as good a reason as any why cricketers should always have a wetsuit and a headlamp handy, as that would actually lead to more entertaining sporting outcomes.

In the interests of fairness and objectivity, here’s the Wikipedia definition of the US Electoral College system: “The Electoral College of the US refers to the group of presidential electors required by the constitution to form every four years for the sole purpose of electing the president and vice-president. Article II, Section 1, Clause 2 provides that each state shall appoint electors selected in a manner determined by its legislature, and it disqualifies any person holding a federal office, either elected or appointed, from being an elector. There are currently 538 electors, and an absolute majority of electoral votes — 270 or more — is required for the Electoral College to elect the president and vice-president. Currently, all states (and the District of Columbia) use a statewide popular vote on election day in November to choose electors, based on how they have pledged to vote. The electors meet and vote in December and the president and vice-president are inaugurated in January. All jurisdictions use a winner-takes-all method to choose their electors, with the exceptions of Maine and Nebraska, which use a one-elector-per-district method while also assigning two electors based on the winning ticket of the statewide popular vote.”

I am yet to meet an American who understands the rules of cricket, but I’m willing to bet that if the Republicans were introduced to DLS they would grab onto it with both hands.

Here is how it might work: “When the election is lost, setting an adjusted target for challenger will be required because it would be correct to assume that failing to reduce the voter target proportionally might lead to a loss of office as the challenger with scores of postal votes in hand is able to behave more rationally and in a more relaxed fashion than the incumbent whose initial run rate made it appear that they had a chance of remaining in the game. The basic principle of the US election, like cricket, is that each team has two resources – votes counted and votes to count – and if you can devalue the latter, your early votes carry greater weight and you are more likely to hold onto your position if you are able to adjust proportionally to the risk of losing by changing proportionally the combination of the votes.”

Cricket also is adjudged by men in white coats. Read into that what you will.

Biden’s victory came after the Associated Press, CNN and NBC showed him winning Pennsylvania and gaining more than the 270 Electoral College votes ...
World
5 months ago

Positive sentiment as much about expectations that a Biden presidency would see a more stable global environment as about its direct effect on the SA ...
Business
5 months ago