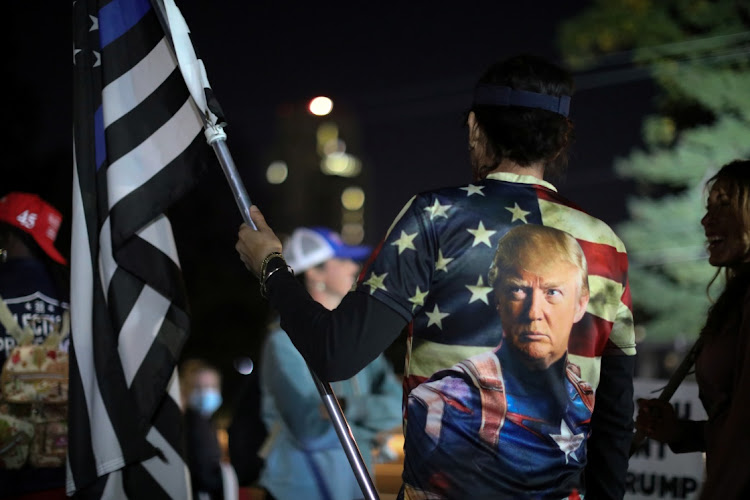 Supporters at a vigil for US President Donald Trump outside of Walter Reed National Military Medical Center, where Trump is being treated for Covid-19, in Bethesda, Maryland, the US, October 3 2020. Picture: REUTERS/JONATHAN ERNST

Washington — Early in the coronavirus pandemic, US President Donald Trump put his faith in a toaster-sized machine that could spit out test results within minutes.

In late March, Trump hailed the launch of the Abbott Laboratories ID NOW test at a Rose Garden event, and embraced its widespread use at the White House to keep the fatal virus at bay. The president often skipped his own administration’s public health recommendations on mask-wearing and social distancing, saying that “everyone’s tested” around him using the Abbott device.

His strategy was no match for the virus.

The president announced on Friday that he and wife Melania tested positive, news that raised questions about the health of other top US officials and threw the final weeks of the presidential campaign into disarray.

“The reliance on a rapid test, with its limitations, unfortunately gave the White House and its staff a false sense of security that they were in control of the virus,” said William Schaffner, a professor of infectious diseases at the Vanderbilt University School of Medicine.

“You cannot rely on that test to create a barrier between you and the virus,” he said. People had to “wear masks, do social distancing and not go to all these rallies”.

While rapid tests can help contain the spread of a contagious virus, they were not designed to be used in isolation. A negative result merely captures a snapshot in time and does not guard against infection soon after. And people may be infectious for days before the levels of virus in their body register positive in a test.

Krutika Kuppalli, an assistant professor and expert on infectious diseases at the Medical University of South Carolina, said not enough was known about how these rapid tests performed in people who were asymptomatic.

“Trump was playing with fire, and it was really a matter of time before something like this was going to happen,” she said. “Even if he had been around someone who was sick, wearing a mask could have prevented him from getting the virus.”

The White House said on Thursday that Trump took the “health and safety of himself and everyone who works in support of him and the American people very seriously”, and that the administration followed guidelines for limiting Covid-19 exposure to the greatest extent possible.

An Abbott spokesperson said the company’s ID NOW test for the coronavirus — used by more than 11-million Americans since regulators approved it for emergency use in March — yielded reliable results. The company referred questions on its use in the White House to the Trump administration.

The gold standard in diagnostic testing is known as polymerase chain reaction, or PCR, testing and is performed in a laboratory. But these tests can take hours or days to process. Abbott’s ID NOW device offers two advantages: a quick turnaround on site and portability.

The Abbott test, which involves putting a nasal swab in a liquid solution and heating it to amplify genetic material from the virus, produces results in 13 minutes or less.

“In a pandemic, the world needs all types of testing for different settings and stages of the virus, including lab-based testing and rapid point-of-care testing,” Abbott said in a statement.

The White House has not released details on what tests were conducted in recent days on Trump and Hicks. There is no evidence that the Abbott tests routinely performed on White House staff and visitors produced inaccurate results, nor that Trump or Hicks were infected in the White House rather than in other settings.

However, despite Trump’s enthusiastic endorsement of the Abbott ID NOW test, some researchers have raised doubts about its accuracy.

In May, a New York University study said the Abbott test could be missing a third to nearly half of positive cases. That same month, researchers at Columbia University Irving Medical Centre found that the ID NOW test identified only 73.9% of infectious samples.

The US Food and Drug Administration acknowledged concern about “potential inaccurate results” from ID NOW in May. The agency said it had received 302 “adverse event” reports on September 30, including many reports of false negatives, results showing patients were not infected when they actually were.

In its authorisation of ID NOW for emergency use, updated last month, the FDA warned that more testing may be warranted to confirm initial results.

On Friday, Abbott said the NYU study was flawed and “rife with limitations”. The company said its device produced results similar to lab-based methods and that even the most sensitive tests could post false negatives depending on the infection cycle in a person’s body and how much virus they were shedding.

A company spokesperson said: “No test detects the virus immediately after the person becomes infected.”

In a statement on Friday, White House doctor Sean Conley said the president’s diagnosis was confirmed with traditional PCR testing.

Emboldened by regular testing of himself and those in close proximity, Trump continued to hold large campaign rallies and events with donors where masks were optional. He flew to his New Jersey golf club on Thursday for a fundraiser and speech.

Trump and his staff often do not wear masks. Last month, the president publicly disagreed with Robert Redfield, director of the US Centers for Disease Control and Prevention, who testified to Congress about the importance of the face coverings.

At Tuesday’s presidential debate, Trump disparaged his opponent, former vice-president Joe Biden, for his frequent mask use. “I don’t wear masks like him — every time you see him, he’s got a mask,” the president said.

Now, the fallout from the White House’s focus on testing as a precaution could extend far beyond the president and his wife, experts say.

“I expect we will see more positive cases” connected to the White House, Kuppalli said.