Facebook and Google under fire in rare Big Tech hearing 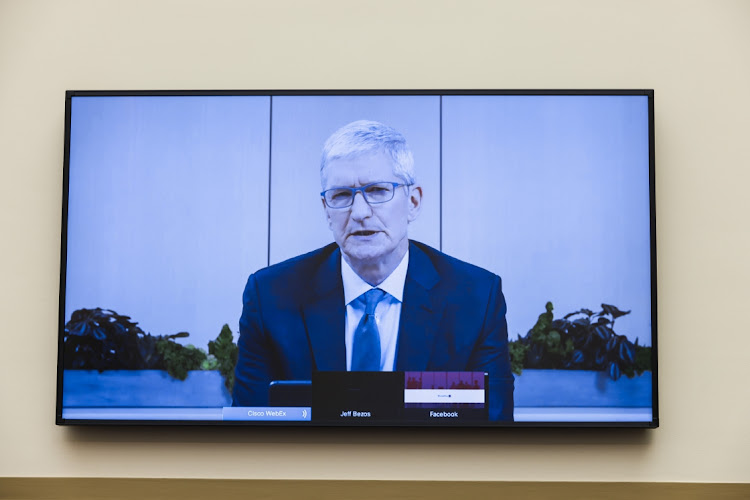 Apple CEO Tim Cook speaks via videoconference during a hearing in Washington, DC, the US, July 29 2020. Picture: BLOOMBERG/GRAEME JENNINGS

Washington  — Google and Facebook took the sharpest jabs for alleged abuse of their market power from Democrats and Republicans on Wednesday in a  congressional hearing with four of America's most prominent tech CEOs in the hot seat.

US Democrat David Cicilline,  chair of the antitrust subcommittee, began by accusing Google of theft.

“Why does Google steal content from honest businesses?” he asked.

Cicilline accused Google of stealing reviews from the company Yelp  and said that Google threatened to delist the company from search results if it objected.

Pichai responded mildly that he would want to know the specifics of the accusation. “We conduct ourselves to the highest standards,” he added, disagreeing with the characterisation that Google steals content from other businesses to populate its search engine and keep users on its own services.

Cicilline said the four companies were gigantic before the US economy shut down in March because of the new coronavirus. “In the wake of Covid-19, however, they are likely to emerge stronger and more powerful than ever before,” he said. “As hard as it is to believe, it is possible that our economy will emerge from this crisis even more concentrated and consolidated than before.”

Cicilline added: “They have too much power. While these dominant firms may still produce some new innovative products, their dominance is killing the small businesses, manufacturing, and overall dynamism that are the engines of the American economy.”

Facebook's Zuckerberg took a series of questions about the company's purchase of Instagram in 2012, and whether it was acquired because it was a threat.

Zuckerberg responded that the deal had been reviewed by the federal trade commission and that Instagram at the time was a tiny photo-sharing app rather than a social-media phenomenon. “People didn't think of them competing with us in that space,” he said.

On the Republican side, Jim Jordan accused the companies of taking a long list of actions that he said showed they try to hamper conservatives from reaching their supporters.

“Big Tech is out to get conservatives,” he said. The companies have denied allegations of political censorship.

Jordan and Cicilline had a heated exchange within 30 minutes of the hearing's start, tangling over Jordan's request to allow another member of Congress to join the panel.

Jordan's allegations come after President Donald Trump, who has clashed with several of the biggest tech companies, on Wednesday threatened to take action against them.

“If Congress doesn't bring fairness to Big Tech, which they should have done years ago, I will do it myself with executive orders,” Trump said on Twitter.

The president did not provide details but in the past has been irritated by tech companies, including Facebook and Twitter, which have occasionally taken action on his postings on issues such as treatments for the coronavirus. He has also clashed with the Washington Post, which is owned by Bezos.

Cicilline's subcommittee has been looking in to allegations by critics that the companies have hurt competitors and consumers with their business practices and seemingly insatiable appetite for data.

In his opening remarks, Zuckerberg told legislators that China is building its “own version of the internet focused on very different ideas, and they are exporting their vision to other countries”.

Apple's Cook pointed out that the fiercely competitive smartphone market includes China's Huawei Technologies, which has been a focus of considerable US national security concern.

The hearing marks the first time the four CEOs have appeared together before legislators, and was also the first-ever appearance of Bezos before Congress.

A detailed report with antitrust allegations against the four tech platforms and recommendations on how to tame their market power could be released by late summer or early fall by the committee, which has separately amassed 1.3-million documents from the companies, senior committee aides said.

The remarks of Alphabet CEO Sundar Pichai may be the most important, as it is evident Alphabet will soon be subject to action over Google’s market ...
Opinion
10 months ago

The fake Tracy Zille account, linked to an EFF official, shows how disinformation can be used on social media primarily to make money, but also to ...
Features
11 months ago