A women’s rights advocacy group says he tries to use some of the good things he’s done as if it settles all of his debts in some way, and it doesn’t 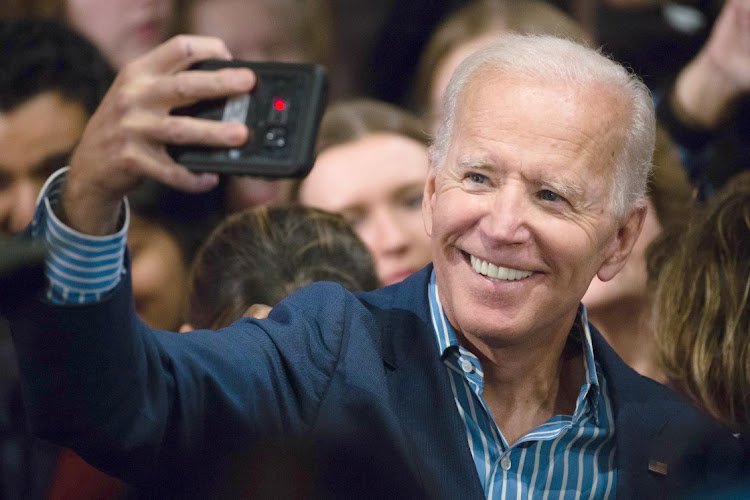 Former US vice-president Joe Biden at a campaign event in Iowa, the US. Picture: BLOOMBERG/ELIJAH NOUVELAGE

Washington — Democrat activists and women’s groups say they saw a familiar and distressing playbook unfolding when Joe Biden addressed the sexual assault allegation against him by denying them and largely moving on.

Now, they’re trying to convince Biden that if he doesn’t continue to address the issue head on, he risks depressing turnout of women voters, potentially giving a boost to US President Donald Trump. Their goal is to get the party’s presumptive presidential nominee to unequivocally show that his views and behaviour around women have changed since his rough questioning of Anita Hill during the Clarence Thomas Supreme Court confirmation hearings in 1991 and his history of inappropriate touching, both of which he has apologised for.

They say it’s not enough to just tout his work on the 1994 Violence Against Women Act and It’s On Us movement, an Obama-era project to fight sexual assault on college campuses. They are looking for more policy and personnel commitments beyond his promise to choose a female running mate.

“That he has to be pressured every single time something in his past is brought up, a mistake that he’s made, a position that he’s taken, etc, is just a complete failure as it relates to leadership,” said Lucy Flores, a former Democrat state assemblywoman in Nevada who has accused Biden of touching her inappropriately.

“This isn’t to discount some of the good things that Joe Biden has done, and that’s part of his problem is that he tries to constantly use some of the good things that he has done as if it settles all of his debts in some way and it doesn’t,” she said, pointing out that she will still vote for him, but knows a number of women who say they do not think they can stomach it.

Reade has hired attorney Douglas Wigdor who is managing her media appearances, and the Trump campaign and its allies have started seizing on the allegations

The Biden campaign said on Wednesday night that its is actively engaging women’s groups and activists on policy related to combating sexual misconduct, pointing to biweekly calls the campaign has had on a range of issues. The campaign also highlighted Biden’s recent proposals to support women during the coronavirus pandemic and his recent statement criticising the Trump administration for rolling back Title IX protections on college campuses and his stance that he would restore protections for victims of sexual assault if elected.

The campaign had considered releasing a video of the former vice-president addressing his work tackling sexual violence, but ultimately decided not to, according to a person with knowledge of the video, who said that Biden, in the video, did not address accusations made by Tara Reade, a former aide when he was in the Senate.

The Biden campaign did not comment on the video.

The advocates don’t predict large numbers of female Democrats will sit out the election or vote for Trump, who has denied all of the many accusations of sexual misconduct against him. But they worry that Biden’s lack of contrition about his own behaviour could depress turnout or activism, particularly among younger and independent women.

“Anybody on the Democrat side who doesn’t think that Republicans who want to destroy Biden aren’t going to raise this repeatedly and leverage the channels they’ve built to spread disinformation, misinformation, and voter suppression content — people that think they aren’t going to use this issue to depress votes, particularly among women in swing states — they are mistaken,” said Shaunna Thomas, co-founder of UltraViolet, a women’s rights advocacy group.  “The idea that if you stop talking it goes away has already been disproved.“

Reade said in March that in 1993 Biden pushed her against a wall in a Senate office building and sexually assaulted her with his fingers. She said she filed a complaint with Senate officials accusing Biden of sexual harassment but not assault. Reade didn’t keep a copy and the records have not been found.

Biden’s campaign immediately denied the allegations in a statement, but it took weeks for Biden to address them directly. In that time, women came forward to confirm that Reade had told them about Biden’s actions at the time.

“It is not true,” he said in an MSNBC interview. “I’m saying unequivocally it never, never happened.”

In her only on-camera interview, Reade told Megyn Kelly that Biden “should not be running on character”, and should drop out of the presidential race.

Reade and others want Biden to release his Senate records at the University of Delaware, arguing that Reade’s complaint and records of her meetings with Biden aides would be there. Biden has said those records do not include personnel files, which are with the Senate. The secretary of the Senate said she is barred by privacy laws from even acknowledging a complaint exists, let alone releasing it.

With no simple resolution and the implausibility of Biden’s removal from the ticket, Thomas said Biden should give a major speech on the issue of sexual misconduct and detail the steps his administration would take to combat the problem, among other steps to show sustained engagement.

“Addressing Tara Reade is one piece,” Thomas said. “But owning harm caused for the pattern of behaviour established last year is something he didn’t do sufficiently and needs to do more of and he needs to make a commitment that his administration will pursue structural changes that we need to end sexual violence.”

Regardless of Biden’s actions, the issue isn’t fading. Recent polling shows nearly 90% of voters had heard about Reade’s allegations, though they split along party lines on whether they believed her.

Reade has hired attorney Douglas Wigdor who is managing her media appearances, and the Trump campaign and its allies have started seizing on the allegations.

Great America PAC, which supports Trump, released a new digital ad this week, which plays audio of Reade telling her story. “Tara Reade said Joe Biden sexually assaulted her,” the ad says. “Democrats and the media are trying to ignore her chilling story. We won’t let them.“

Republicans are also framing Democrats as hypocritical for defending Christine Blasey Ford when she accused Brett Kavanaugh, one of Trump’s nominees to the supreme court, of sexually assaulting her, while they are seeming to give Biden a pass.

Christine Pelosi, a Democratic National Committee member and daughter of House speaker Nancy Pelosi, said Reade’s allegations should still be investigated independently, perhaps by the DC police, as she said she has called for in every case of sexual misconduct allegations against a politician. But she said Biden’s response, albeit delayed, struck the right tone.

“If I were the Biden campaign, I would frankly not re-litigate the issue,” she said. “I would stand by what you said and stand by what the vice-president said.”

Trump reverts to type with too many tweets and blaming Obama

Donald Trump is using diversion, as he often does, as insiders say he is frustrated over his re-election and not being thanked enough by governors
World
2 years ago

Both Trump and Xi are getting flak domestically over their handling of Covid-19, and neither are assured of another term, writes Ian Bremmer
Opinion
2 years ago
Next Article