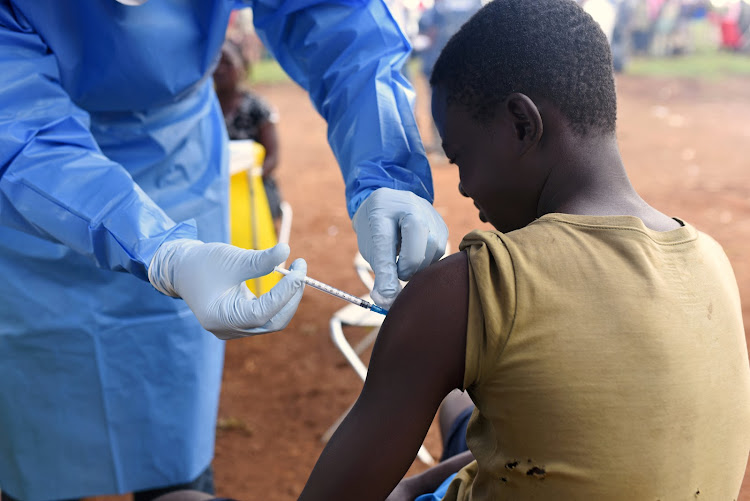 A boy gets the Ebola vaccine in Butembo, the DRC. Picture: REUTERS/OLIVIA ACLAND

Mangina, Democratic Republic of the Congo — When Ebola hit her town three years ago, Congolese seamstress Zawadi Kavira did something previously unthinkable in her conservative community — she became a builder.

Construction was traditionally seen as men’s work in Mangina in North Kivu province, where the Democratic Republic of the Congo’s worst-ever Ebola epidemic began.

But the rural community needed extra hands to build a dedicated treatment centre, and though the work — fetching water, digging holes and transporting gravel — was hard, it was rewarding and relatively well-paid.

“I tried to make myself useful,” said the 39-year-old, one of hundreds of local women engaged in the response to the outbreak — for many, their first experience of paid employment.

“Women can turn their hands to anything, and we wanted to be involved.”

North Kivu has suffered more than 20 years of armed conflict — one of the biggest barriers to mounting an effective response to the last major outbreak, which killed more than 2,200 people before it was declared over last year, according to aid groups.

Many in the community resented the focus on a single disease in a region racked by conflict, while the presence of government forces to protect health workers also caused anger and suspicion, said medical charity Medecins Sans Frontieres. Concerned that these suspicions were hampering efforts to tackle the outbreak, the area’s main women’s group, SOFEPADI, issued a plea that local women be placed at the heart of the response.

Women, they argued, were already the main caregivers in the community, and their trusted status meant they could help tackle misinformation that was preventing people from reporting symptoms or seeking treatment.

“Women have so much influence on their husbands, their children, and the community as a whole,” said Aime Kiakimwa, a leader of SOFEPADI in the city of Beni in North Kivu.

“We could not achieve anything without them.”

The outbreak brought many female members of the community opportunities they had previously seen as unattainable in a country where women have long struggled to have their voices heard.

Female representatives account for only about 12% of the 500 seats in Congo’s national parliament and the country only gave women the right to vote in 1964 — four years after independence.

Yet as a fresh Ebola outbreak hit the region this month, local women’s leaders said the opportunities had been short-lived.

Many local women paid to engage in awareness-raising are now unable to find paid work as organisations with funding for such work tend to favour men, said Antoinette Zawadi, coordinator for a Beni-based umbrella association of local women’s groups.

She also said some aid workers had “deliberately capitalised on the naiveté or the lack of awareness of these (women) about sexual exploitation and abuse” during the crisis.

A Thomson Reuters Foundation investigation with The New Humanitarian found that dozens of women who sought paid work with aid organisations working on the 2018-2020 Ebola crisis suffered sexual harassment or exploitation.

Last month, an independent commission set up by the World Health Organisation found more than 80 aid workers were involved in sexual abuse and exploitation of women and girls.

WHO Director-General Tedros Adhanom Ghebreyesus has vowed to ensure that the affair would be “the catalyst for a profound transformation of WHO’s culture”.

As one of the only women in Mangina to have completed high school, 29-year-old single mother Dekila Kavira Kyakimwa managed to get work with the UN raising awareness of Ebola.

The money she made meant she could help family — paying for weddings and funerals, and funding the education of her late brother’s two children — and open a hair salon.

“I have truly experienced what we call women’s empowerment, thanks to the salary I got from the (Ebola) response,” she said.

But in May this year Mangina was attacked by a rebel group, forcing residents to flee. Dekila grabbed her children and ran, and when she returned, her house and salon had been gutted.

Worse, some in her community rejoiced at Dekila’s loss.

“They said it was right that the ADF (rebels) had stolen my belongings because they were acquired on the back of Ebola victims,” she said.

“That’s what really hurt, when I thought of the investments that I had no hope of recouping.”

At a recent community meeting in Mangina to discuss rising violence, residents said the response to the Ebola crisis had raised women’s sense of what they could achieve, with lasting effects.

“It will be an example to future generations,” said Louise Kavira, a local official. “They will be motivated, aware that they were not born just to be housewives.”

Local Mayor Kasereka Kandondo said the epidemic had shown the town what women could do for their community.

But he conceded that their participation in public life was still minimal.

There are more and more women’s groups, but few women-led businesses. Insecurity and the difficulty of accessing funds — the only bank is 30 kilometres away in Beni — have not helped.

The four months she spent building the medical centre enabled her to fulfil a long-held dream of buying her own sewing machine at a cost of $80.

But when violence broke out in the town earlier this year, she fled to Beni with her family, and thieves stole the machine.

Today she is back to her old work selling mobile phone top-up cards, earning no more than $8 a day.

“It was complete panic,” she said sadly. “We had no choice but to forget our dreams and run to Beni to save our lives.”