Ethiopia has nearly completed the Grand Ethiopian Renaissance Dam on the Blue Nile, worrying the other countries about its downstream fallout 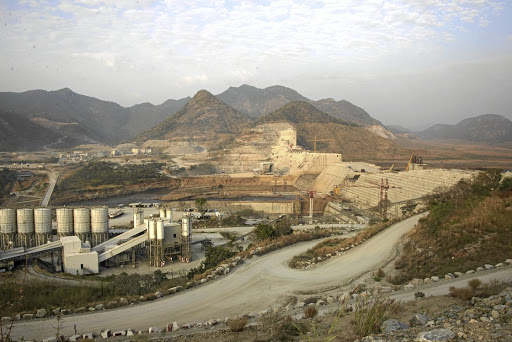 The Grand Ethiopian Renaissance Dam under construction on the Blue Nile. Picture: DPA

Addis Ababa — Ethiopia and Egypt have appeared to head off an escalation in their dispute over a giant dam Ethiopia is building on the Nile River, pledging further talks to resolve an impasse over how quickly it gets filled.

Ethiopia’s government simultaneously announced that it’s completed the first phase of filling the dam, following recent heavy rains. That could remove a flashpoint after reports last week that Ethiopia had begun pooling water without agreement from Egypt and neighbouring Sudan raised tensions between the three nations.

Talks between Ethiopia, Egypt and Sudan’s leaders on Tuesday reached a “major common understanding” that paved the way for a “breakthrough agreement” on the filling of the reservoir, Ethiopian Prime Minister Abiy Ahmed’s office said in a statement.

“It was agreed to continue negotiations and focus, for the time being, on giving priority to crystalising a binding legal agreement on the rules of filling and operating” the dam, Egypt’s presidency said in a statement. “This shall be followed by working towards a comprehensive agreement for all aspects of joint co-operation among the three countries with regard to the use of the Nile water.”

Ethiopia is close to completing construction of the Grand Ethiopian Renaissance Dam on the Blue Nile, or Abbay River, a main tributary of the Nile. Egypt relies on the larger river for most of its fresh water and has opposed any development that might affect the downstream flow of the waterway — a position echoed by Sudan.

Both nations want an agreement with Ethiopia on how quickly the dam is filled to guarantee their water supplies.

Abiy’s office said that in addition to achieving its first-year, dam-filling target, recent rains have resulted in the reservoir “over-topping”.

“Current rainfall and the runoff situation in the region have made it conducive to fill the dam,” it said. “Ethiopia is committed to a balanced and win-win negotiation that [ensures] the Abbay River will benefit all the three countries.”