Maria Ressa from the Philippines and Dmitry Muratov of Russia will share the $1.1m prize 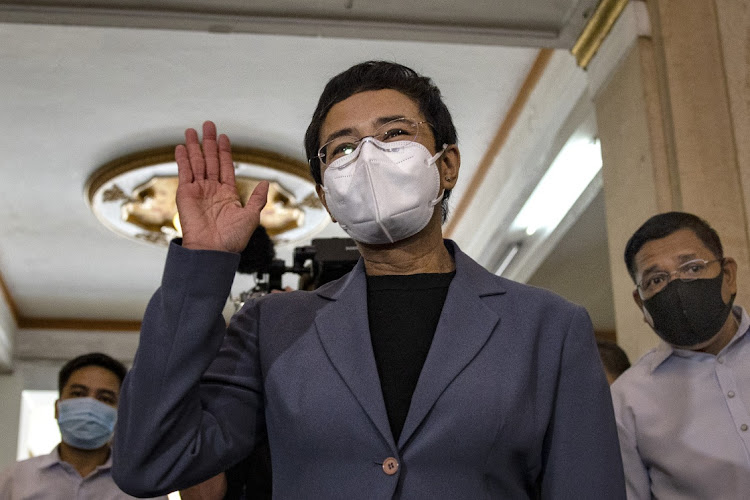 Maria Ressa, editor and CEO of Rappler, waves to reporters after being convicted of cyber libel at a regional trial court on June 15 2020 in Manila, Philippines. Picture: GETTY IMAGES/EZRA ACAYAN

Maria Ressa from the Philippines and Dmitry Muratov of Russia won the Nobel Peace Prize for their work to safeguard freedom of expression.

They are “receiving the Peace Prize for their courageous fight for freedom of expression in the Philippines and Russia,” the Oslo-based Norwegian Nobel Committee said in a statement on Friday. “At the same time, they are representatives of all journalists who stand up for this ideal in a world in which democracy and freedom of the press face increasingly adverse conditions.”

The two will share the 10-million Swedish krona ($1.1m) prize, the first awarded for journalism since German reporter Carl von Ossietzky won in 1935.

Ressa has won wide international praise for investigations of alleged police abuses in President Rodrigo Duterte’s anti-drug efforts. She’s carried on despite what journalism advocates say is a campaign of official intimidation, including a tax evasion case and a claim by regulators that financial support that her outlet, Rappler, received violated a ban on foreign ownership of media.

Annual prizes for achievements in physics, chemistry, medicine, peace and literature were established in the will of Alfred Nobel, the Swedish inventor of dynamite, who died in 1896. The prize in economic sciences was added by Sweden’s central bank in 1968.

LETTER: Remember Khashoggi and all other brave truth tellers