In the highest-level intervention in the crisis since it erupted on Sunday, leaders of the three powers call for a return to negotiations without delay 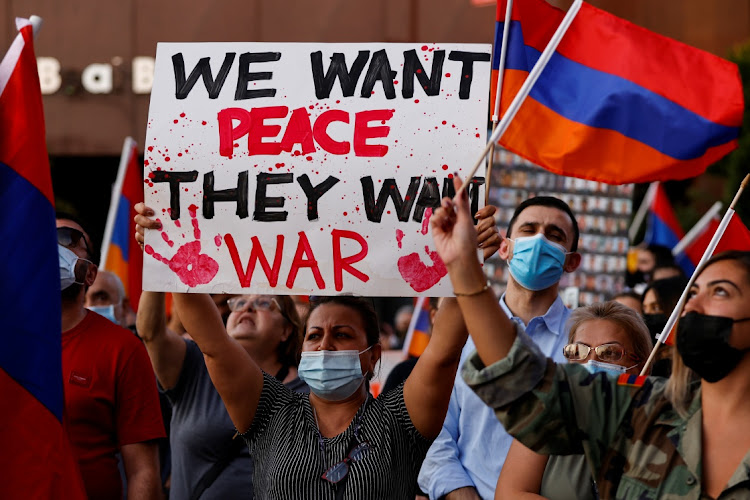 People take part in a protest against what they call Azerbaijan's aggression against Armenia and the breakaway Nagorno-Karabakh region, outside the Azerbaijani consulate in Los Angeles, California, the US, September 30 2020. Picture: REUTERS/MIKE BLAKE

Moscow — Russian President Vladimir Putin issued a joint call with his US and French counterparts, Donald Trump and Emmanuel Macron, for Armenians and Azerbaijanis to halt their worst fighting in decades over disputed land.

“We call for an immediate cessation of hostilities between the armed forces of the parties involved,” the presidents’ joint statement said, the highest-level intervention in the crisis since it erupted on Sunday. The leaders “condemn in the strongest terms the escalation of violence” over Nagorno-Karabakh, according to the statement on the Kremlin’s website.

Turkish President Recep Tayyip Erdogan has set himself against the three powers, which act as the so-called Minsk Group of mediators who have tried without success to resolve the conflict over Nagorno-Karabakh for nearly three decades. The Minsk Group’s search for a truce is “unacceptable” and the conflict will only end when Armenian forces have left Azerbaijani territory, Erdogan told Turkey’s parliament.

The diplomatic confrontation adds to tensions between Russia and Turkey over proxy conflicts in Syria and Libya. Russia has an army base in Armenia and the two nations have a mutual-defence pact, though it does not cover the disputed territory. Azerbaijan, which has close historical and linguistic ties to Turkey, hosted large-scale joint exercises with the Turkish military last month.

Azerbaijani President Ilham Aliyev has vowed to continue the fight until Armenian forces leave Nagorno-Karabakh and seven surrounding districts that were taken during a war after the Soviet Union’s collapse.

Armenia says it is  defending Nagorno-Karabakh’s right to self-determination after its Armenian majority declared independence. Aliyev says his forces are fighting to restore control over land internationally recognised as part of Azerbaijan.

Armenia has accused Turkey of military involvement alongside Azerbaijan and asked the international community to help. Ankara and Baku deny Turkish forces are taking part in combat.

The violence is more intense and widespread than at any time since Russia brokered a 1994 ceasefire to halt the war that killed about 30,000 and displaced more than a million people. It has shown little sign of easing. Dozens have been reported killed in the latest fighting.

Turkey’s declarations on the conflict are “dangerous”, Macron said in Latvia’s capital, Riga, on Wednesday. France “won’t accept any escalatory message” on the crisis, he said.

Russia’s foreign ministry said Wednesday it was concerned by reports that “militants of illegal armed groups” from Syria and Libya were being sent to Nagorno-Karabakh and demanded their immediate withdrawal.

Armenia has complained that foreign mercenaries are fighting alongside Azerbaijani troops, while Azerbaijan alleges Kurdish militants have joined Armenian forces.

Fighting erupts between Armenia and Azerbaijan over disputed region

EU, OSCE and Russia urge both sides to hold talks after at least 16 were killed in clashes  over Nagorno-Karabakh
World
10 months ago
Next Article