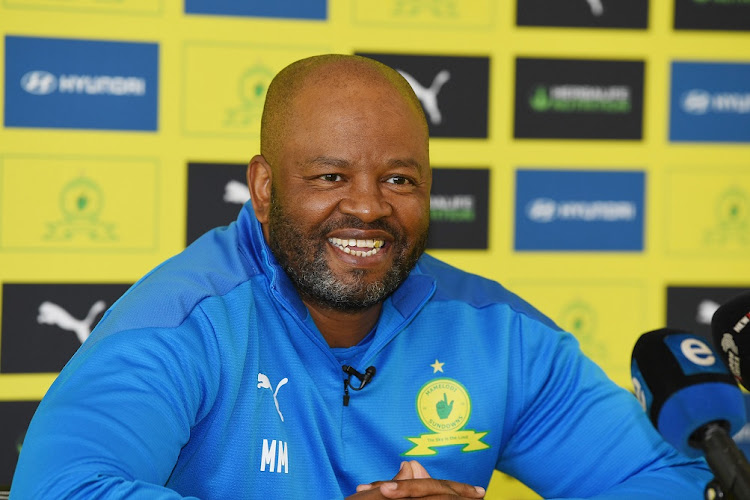 Mamelodi Sundowns co-coach Manqoba Mngqithi during the a press conference at the club's Chloorkop headquarters in Midrand on May 19 2022.
Image: Lefty Shivambu/Gallo Images

The Buccaneers take on RS Berkane at neutral Uyo in Nigeria on Friday night, aiming to lay their hands on the Confederation Cup trophy after they lost narrowly, 2-1 in aggregate, to Etoile du Sahel in the 2015 final.

By qualifying for the final, Pirates will finish their Premier Soccer League (PSL) fixtures beyond the final day of the campaign this weekend as they have three more games to play.

“It is encouraging to have an SA team competing in that space,” said Mngqithi as Sundowns prepared to take on Royal AM at Chatsworth Stadium in their final PSL match on Saturday, when they will be handed their championship trophy.

In a statement likely to divide soccer fans, Mngqithi added that South Africans must support Pirates in their mission to lift the title. Downs, Pirates and Chiefs fans are not known for backing their rivals even when they are flying the flag for the country in continental competition.

“That should ignite fire in all of us as South Africans. If we are patriotic enough, we really have to support and show that one of ours stands a chance of conquering the continent.

“One would not want to mince his words but wish Orlando Pirates all the best in their run in the final and wish they can bring it home. Maybe it will bring a glimpse of hope for SA football and the country in general to see one of our teams lifting a continental tournament [trophy].

“They have done very well and they have the capacity to do it. The confidence I have in [Pirates coaches] Mandla [Ncikazi], Fadlu [Davids] and the whole team suggests they are a team that has the capacity to win it,” said Mngqithi.

Sundowns were knocked out in the quarterfinals of the Champions League by Petro Atlético and are left with two matches to complete their domestic season.

The game against Royal AM this weekend is their last in the league and they will return next weekend for the Nedbank Cup final against Marumo Gallants at Royal Bafokeng Stadium in search of a treble of trophies.