Middendorp’s mission: get a win 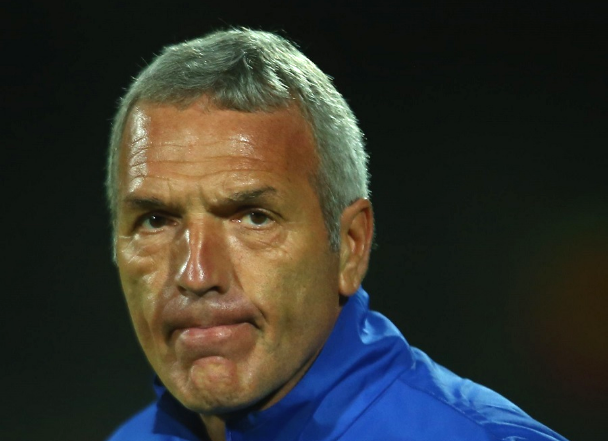 Ernst Middendorp had better not take too long making himself comfortable in his surroundings back as head coach at Kaizer Chiefs‚ because he is expected to hit the ground running‚ Amakhosi football manager Bobby Motaung has said.

Middendorp made a sensational return to Naturena‚ where he coached from 2005 to 2007‚ replacing Giovanni Solinas within hours of his predecessor being axed on Friday.

Chiefs have made it clear that one of their reasons for the departure of Solinas just five months into his contract was that they believe they still can salvage something – a trophy‚ good performance in the Caf Confederation Cup‚ or even the league – from their 2018-19 season.

Motaung‚ asked if there is a short-term target for Middendorp in the first six months of his two-and-a-half year contract‚ made no bones of what is expected of the 60-year-old former Maritzburg United‚ Bloemfontein Celtic and Arminia Bielefeld coach.

“We don’t have short-term and that. He’s got a two-and-a-half year contract. So he’s hitting the ground running‚” Motaung said.

“That’s why we also have undertaken also to bring in an assistant [Shaun Bartlett]‚ working with the technical staff that is there.

“Along the journey‚ if there are any challenges with the team we will also bolster the team and help him [Middendorp].

“And that’s it. It’s a straight-forward business. He’s coming in here to work. He knows what is up there in terms of the challenges.

“He needs to win games. That’s what we brought him for. And he signed up for that.

“So there’s no short-term or long-term. It’s straightforward – it’s a job that is there.

Chiefs did not win trophies in three seasons under Solinas’s predecessor Steve Komphela.

They will have gone three-and-a-half seasons without silverware come the end of this month.

Middendorp‚ who began training Chiefs on Saturday‚ faces his first assignment against SuperSport United at Mbombela Stadium on Wednesday.

Chiefs ’ defeat against amateur part-timers from Zanzibar Zimamoto was the final straw for the club ahead of their axing of Solinas as head coach last week‚ Motaung has revealed.

While the wording‚ not unusually ‚ was that Amakhosi and Solinas had “amicably parted ways”‚ Solinas was effectively dismissed on Friday and replaced within hours by Middendorp.

Zimamoto do not evencompete in Tanzania’s main Premier League. They play in the Premier League of the semi-autonomous Tanzanian island of Zanzibar.

Motaung said Chiefs’ unconvincing results before that game had already seen the club in contact with Middendorp. “We thought we needed somebody‚ also‚ who’s got the knowledge of the team‚ who’s got the experience here‚ and who’s got the pedigree of Ernst for the type of players we’ve got.”

Motaung said Chiefs had been in contact with their former coach for about two weeks before his appointment.