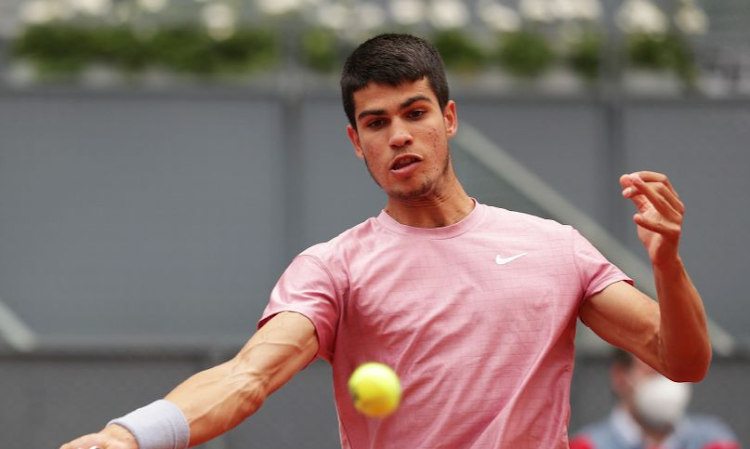 Men’s tennis has waited more than a decade for a player to emerge with the game and mental fortitude to shake up the “Big Three” establishment.

On Sunday Carlos Alcaraz signalled the wait might finally be over as he captured his fourth ATP title of the season at the Madrid Open and affirmed himself as a genuine threat for the French Open title.

If Alcaraz is the future of men’s tennis, the future is already here.

“Right now I’m trying to just assimilate everything that I am going through,” Alcaraz told reporters. “This year ... people are going to think that I’m going to be one of the favourites to win Roland Garros.

Outside the top 100 a year ago, Alcaraz is now ranked sixth, having torn up the record books this season. In a few dizzying days in Madrid, he set another slew of benchmarks.

He became the tournament’s youngest champion and the first player to beat both 21-time Grand Slam champion Nadal and world No 1 Djokovic at the same clay-court event.

Having won at Miami a month ago, Alcaraz is now the second-youngest player to win two ATP 1000 titles, headed only by compatriot Nadal, who was 18 when he captured his second.

While Alcaraz would appear a natural successor to Nadal he regards his game as more closely aligned with that of Roger Federer, the other member of the “Big Three”. It means a commitment to his attacking weapons but also a faith in his defence and ability to problem-solve through tricky situations.

His coach, Spanish former world No 1 Juan Carlos Ferrero, claimed only the 2003 French Open title among the four Grand Slams but he was a notable all-court player comfortable on all surfaces. Alcaraz appears to have emulated the variety in Ferrero’s game, mixing blazing groundstrokes with plenty of drop-shots and rushes to the net to keep opponents guessing.

The world’s top players have bought into the Alcaraz hype, with a string of them, including Zverev, describing him as “the best player in the world right now”, less than two weeks out from the French Open.

Alcaraz, however, has shown only humility and stuck to a mantra of learning from his defeats, even if those have been few and far between recently. “Look at Rafa, Djokovic, Federer, all of them improve and they have things to improve,” said Alcaraz, who will bid for his maiden grand slam title in Paris.

At the same time Zverev blamed the ATP Tour’s scheduling for his underwhelming performance.

“The scheduling needs to be done better ... yesterday I started my match at 11pm. I played three sets. Finished at 1.30am,” Zverev told reporters. “Until I get back to the hotel, until I eat, until I do my work with the physio because I have to prepare my body for the next day, it’s 5am.

“If you stay up until 4am-5am, the next day you are tired. If you do it two nights in a row, you are completely dead. You are destroyed, you will not be able to do physical activity on a maximum level.”