After serious injuries in April 2018, the jockey persevered to ride the 2,000th winner of his career at Turffontein on Saturday 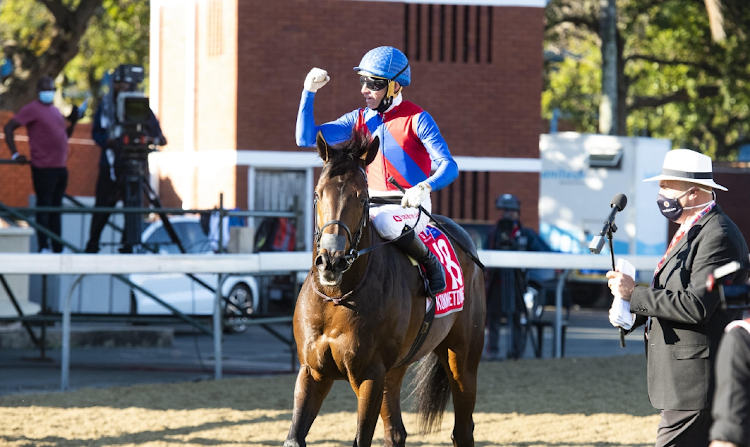 As he lay in a Johannesburg hospital badly injured in April 2018, no-one would have blamed jockey Gavin Lerena if he had said he did not want to see another horse, let alone ride one.

A crashing fall in a feature race at Turffontein had left the then 33-year-old with several broken bones and his mount dead.

But he took a leaf out of the book of his cousin Kevin Lerena (IBO cruiserweight champion), and got back off the canvas.

Lerena fought his way back to fitness and returned to the sport he loved. At Turffontein last Saturday that perseverance paid off when he rode the 2,000th winner of his career.

For many people, 2021 has been a year to forget because of the Covid pandemic, but not for the Johannesburg-born rider. He realised a dream when winning SA’s most famous race — the Durban July — at Greyville on the first Saturday of July.

The win brought back memories of 1987 when this newspaper — and others throughout the country — made great play of jockey Garth Puller having lost 6kg to weigh 49kg on his July mount Bush Telegraph.

When Lerena got the call in June to partner Kommetdieding in the Durban July, his weight was 56kg. “When I got the offer to ride at 53kg, I bounced it off my good mate Devin Habib. He has gone through the tribulations of coming back from 65kg to ride again and he gave me the inspiration to accept the challenge.”

The rest, as they say, is history with 10-1 chance Kommetdieding flying the flag for the three-year-old and Lerena’s achievement was described by the Sporting Post as “figuratively earning him the freedom of Durban — and the Cape Flats — with a polished professional ride”.

Before the July (his previous best finish was his second on Rainbow Bridge in 2019), Lerena had delighted punters when scoring on Mike de Kock’s runner Desert Miracle in the grade 2 Golden Slipper.

Lerena has always been a staunch family man. One can imagine his wife, Vicky, played a key role in his loss of weight. His victory will also have delighted his father Tex, probably his biggest supporter.

It is worth cataloguing some of Lerena’s achievements since he rode his first winner on El Ganador at Greyville in August 2003.

• December 2015: his biggest payday as, cheered on by his father, he banked the huge sum of HK$500,000 by winning the Longines International Jockeys Challenge at Happy Valley racecourse in Hong Kong.

• Selected to represent the “Rest Of The World” team for the Shergar Cup at Ascot in England, Lerena showcased his talent by riding two winners.

• He holds the record for most wins by an apprentice (283) in a season.

• In June 2014, he posted another record when winning 42 races in a single month.

His double on Ultra Quick and Quantum King last Saturday also had a connection to the July result as the latter is a half-brother to Kommetdieding.

If racing fans were allowed to be at Turffontein last weekend there would have been a huge cheer as Lerena returned to the winner’s enclosure on Ultra Quick.

Perhaps — in all the glowing reports on the 36-year-old’s achievement — Mark Van Deventer, writing in the Interbet website, described it best saying “loyal highveld punters see him as rock solid and dependable when wagering their hard-earned cash”.

Another David Makins home-bred in the spotlight

Another David Makins home-bred in the spotlight