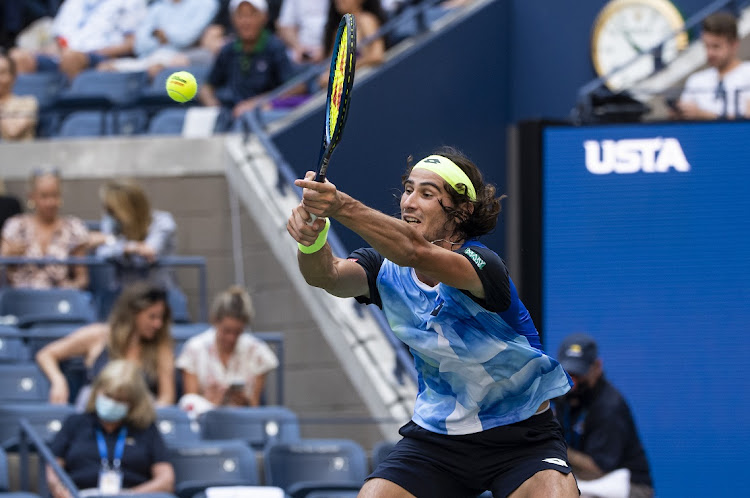 Lloyd Harris of SA hits a backhand against Alexander Zverev of Germany in the quarterfinals of the men's singles at the US Open in New York on September 8 2021. Picture: TPN/Getty Images

For more than 18 years Djokovic, Federer and Nadal have dominated the international scene with a combined 60 victories from the 72 Grand Slams played in that time.

SA’s Kevin Anderson has a pair of Grand Slam finals to his credit after he lost in the 2017 US Open and 2018 Wimbledon, while emerging talent Harris, aged 24, reached the quarterfinals of the US Open last week but lost to Alexander Zverev in straight sets.

“It has been coming for a while,” said Harris, who will lead SA against Venezuela in their Davis Cup Group II tie in New York this weekend.

“It has been hard for the younger generation to crack the Grand Slams. Novak has been unstoppable on tour and in his last match he came up against an extremely difficult opponent on the day in the form of Daniil Medvedev.”

In a year that has seen some impressive results, including shocking Nadal at the Washington Open, Harris jumped 15 places in the rankings to 31st spot after the US Open.

“This reflects on the new generation,” he said of the young brigade emerging among the world top 10. “I mean Zverev won a gold medal at the Olympics in Tokyo and Medvedev winning the recent US Open by beating Djokovic shows that the younger generation is really coming through. If you look at the top 50 now, there are more young guys in there than has been the case for over the last 20 years.”

Harris said he is not surprised because he played with most of the players that are doing well at youth level.

“This new generation of players are coming along very nicely and these are the guys that I grew up with in the juniors. We are all within one year of each other having been born between 1996 and 1998, which is almost incredible.

“I have known these guys for a long time. We have been competitive in the juniors already and it’s nice to see all the guys progressing, and now is the time to kick out all the big three and take over.”

Emma Raducanu, 18, says she hasn’t even checked her phone after stunning the sports world with her US Open victory
Sport
11 months ago