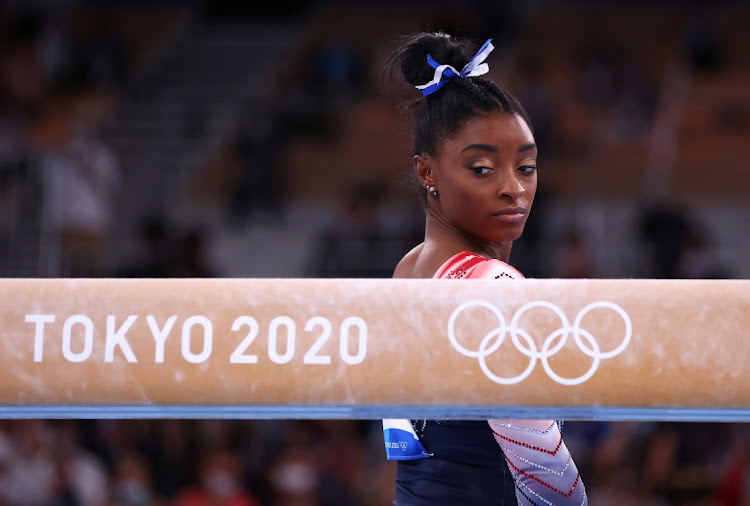 Tokyo — Simone Biles made a fearless return to competition on Tuesday, capping a tumultuous Tokyo Games with a bronze medal on the balance beam.

The final gold of the women’s artistic gymnastics programme would go to China’s Guan Chenchen with a score of 14.633 and the silver to her compatriot Tang Xijing but it was Biles who grabbed the spotlight for her courageous comeback.

“I was proud of myself just to go out there after what I’ve been through,” said Biles, who arrived in Tokyo having already won four golds and a bronze in Rio five years ago.

“This one is definitely sweeter. I’ll treasure this one a lot more after everything I have been through.”

Biles, three times a world champion on the beam, finished with bronze but it was considered a victory after a dramatic Tokyo Games in which she abruptly dropped out of the team competition last Tuesday after performing just one vault, citing mental health issues.

The 24-year-old came to Tokyo eyeing a record haul of six golds, which would have made her the most successful female Olympian of all time across any sport, but instead suffered a crisis of confidence that led to her withdrawing from the all-around, vault, asymmetric bars and floor exercise finals.

Biles explained later she was dealing with the “twisties” — a type of mental block where gymnasts are disoriented during their gravity-defying sequences.

If there was any lingering apprehension or pressure, it did not show as a relaxed Biles blew kisses to the television cameras as she entered the arena for her final shot at a medal.

After a quick hug from her coach and deep breath, it was back to work as Biles stepped to the beam with a look of determination.

With billions of viewers transfixed on Biles as she mounted the 10cm-wide apparatus, she did not waver as she began to showcase a number of complex skills with a triple spin in the squat position.

But as she prepared to get ready for her dismount, everyone held their breath, willing the American to make a safe landing.

Before she arrived in Tokyo, Biles had spent hours perfecting a double-twisting, double-back dismount from the beam, and unsurprisingly she did not attempt that combination on Tuesday.

What she did pull off was a double-piked somersault dismount,  and when she landed safely, roars could be heard in the arena, in Tokyo and probably the rest of the world.

She broke into a huge smile and clutched her heart as soon as she completed her routine before performing a delightful jig after hugging her coach.

Her performance was clearly not the normal perfection expected from a gymnast billed as the greatest of all time but was fearless in its execution.

The third of eight competitors to perform, Biles’s mark of 14.000 did not look as if it might be enough for a place on the podium but in the end the only one to leapfrog the American would be the last one to compete, Guan.

When the final scores appeared, Biles celebrated by first embracing her teammate Sunisa Lee, who had claimed the all-around crown earlier in the competition.

The bronze was the second medal Biles picked up at the Tokyo Games, to go along with the silver she shared in the team event.

The two medals bring her Olympic total to seven.

The sprinter says while he is disappointed, Italian Lamont Marcell Jacobs deserved to win
Sport
1 month ago
Next Article

Devlin Brown at the water cooler: Which exercise will help me drink from the ...

Devlin Brown at the water cooler: Which exercise will help me drink from the ...