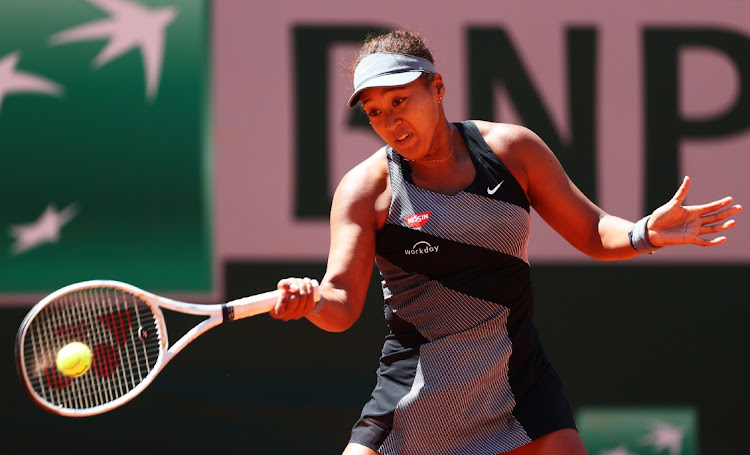 Naomi Osaka of Japan plays a forehand in her First Round match against Patricia Maria Tig of Romania during Day One of the 2021 French Open at Roland Garros on May 30 2021 in Paris, France. Picture: GETTY IMAGES/JULIAN FINNEY

Judy Murray spoke out in support of Naomi Osaka on Wednesday, saying tennis players faced extremely high demands from the media which could become an “underestimated source of stress”.

Murray, a coach and mother to three-times Grand Slam winner Andy and multiple doubles champion Jamie, said she hoped that Osaka, who pulled out of the French Open in a row over media duties, would find a way to be comfortable in the sport again.

Four-times major winner Osaka stunned the tennis world on Monday when she withdrew from Roland Garros after being fined and threatened with expulsion for refusing to face the media, saying she needed to protect her mental wellbeing.

The Japanese 23-year-old, who is based in Florida in the US, has received the backing of her home country, sponsors, fellow athletes and fans and was lauded for her courage in speaking about her mental health issues.

But many tennis players have also said they considered mandatory news conferences as part of the job.

“Naomi Osaka’s press-conference boycott has divided a lot of people but I find myself coming down on her side,” Murray wrote in a column published in The Telegraph on Wednesday. “I have always felt that the media demands on tennis players are extremely high — probably more so than in any other sport.

“Being afraid of facing the press, being tripped up by a curveball question, being trolled on social media, the loss of privacy: these public-facing elements of the job are an underestimated source of stress,” she wrote.

“How many young people do you know who would be comfortable addressing or being questioned by a roomful of very much older strangers?

“It’s hard for any young athlete, but especially so for girls. They look up and see dozens of middle-aged men, people they can’t easily relate to, and who lack experience of playing the game.”

Murray said she had taken a course in public relations to help Andy when he struggled with media conferences. “He wanted to compete in big stadiums in front of huge crowds, not to be asked about whether his shorts were too big, or whether he should get a haircut, have a shave or smile more often,” the Scot said.

“She [Osaka] is one of a very exciting batch of young female players. I am a big fan of hers. I hope with all my heart that she can find a way of feeling more at home in this sport. It would be terrible if we reached the point where we lost her to the game.”