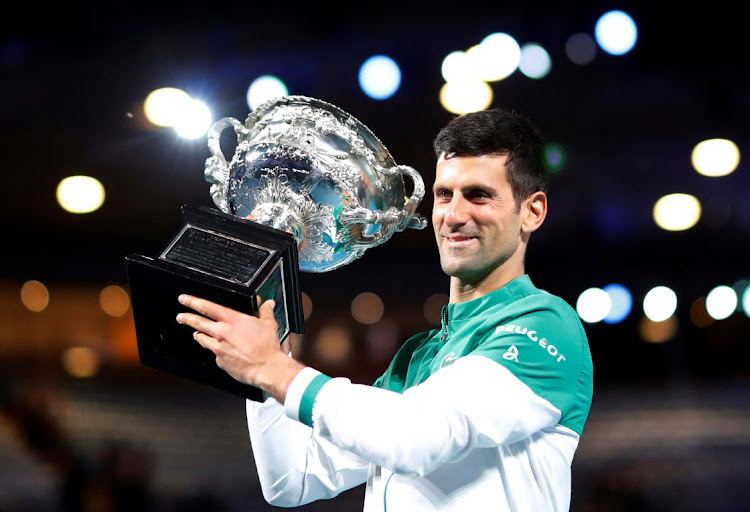 A tournament that had to contend with many uncertainties due to the Covid-19 pandemic, climaxed with Novak Djokovic remaining an unbreakable force as he thrashed Daniil Medvedev to claim a record-extending ninth Australian Open title on Sunday.

The world No 1’s 7-5 6-2 6-2 triumph under the lights at Rod Laver Arena secured his 18th Grand Slam title, bringing him within tantalising reach of Roger Federer and Rafa Nadal’s all-time men’s record of 20.

Much like Dominic Thiem in the 2020 final, Djokovic faced an opponent desperate for success and his own seat at the Grand Slam table. Unlike Thiem, who pushed Djokovic to five sets, Medvedev never really threatened in his second Grand Slam final.

Djokovic made a mockery of the Russian’s 20-match winning streak and his prematch barb that all the pressure to win was on the champion. Djokovic broke him seven times for the match and closed out the one-sided contest with a net-rush and a brilliant leaping volley.

Having extended his unbeaten record in nine finals at Melbourne Park, the Serb roared in triumph and wrapped up his team in a group hug. After acknowledging Medvedev’s congratulations, Djokovic thanked the blue centre court during the trophy ceremony.

“I would like to thank Rod Laver Arena. I love you each year more and more. It’s been a love affair that keeps growing. Thank you so much,” he said. “On the court, he’s [Medvedev] definitely one of the toughest players that I ever faced in my life.

“It’s a matter of time when you hold a Grand Slam that’s for sure. If you don’t mind waiting a few more years.”

Djokovic now has won six Grand Slam titles after the age of 30, equalling Nadal’s record. He had said prematch that Medvedev was the man to beat in Melbourne Park and seemed determined to do it quickly as he slammed down an ace first point and broke Medvedev immediately.

With an acrobatic, leaping smash, he shot out to a 3-0 lead. It was a deflating start for Medvedev but he rallied to 3-3. Running the Serb ragged in an epic rally, Medvedev clinched two break points when Djokovic netted a drop-shot from the baseline and the Serb dropped serve with a smash into the net.

With Medvedev matching him on the baseline, Djokovic tried pulling him to the net, the Russian’s least favourite part of the court.

The ploy paid off as Djokovic ripped a backhand passing shot for three set points and took it when a flustered Medvedev thumped a forehand into the net. The momentum swung to Medvedev as Djokovic’s backhand wavered when serving first in the second set. Yet the Russian could not consolidate, handing the break back with an error-strewn game.

Play was suspended briefly midpoint at 2-1 after a protester yelled “free the refugees” repeatedly during play before being ejected to cheers from the crowd. Medvedev seemed unperturbed when he fired an ace on the next point but then dropped serve in a hurry with a pair of unforced errors.

Djokovic marched on to a 5-2 lead and Medvedev smashed his racket in fury. The Russian sunk deeper into a funk, slapping a forehand long to concede two set points before being almost knocked off his feet by a sizzling Djokovic return.

Worse was to come as Medvedev started the third by being broken twice in succession, a weak volley into the net handing Djokovic a 3-0 lead. It had all gone downhill so quickly but Medvedev battled to break back. Yet there was no way to breach Djokovic’s stonewall defence.

Holding to 5-2 after an epic rally, Djokovic went to his chair with a pointed tap at his temple and an icy gaze at the Russian. In a thrilling match point, Djokovic raced around the court before ending up at the net where he leapt high to smash a lob past the Russian and claim his second hat-trick of titles at Melbourne Park after his 2011-2013 treble.

“Never easy to speak when you just lost a final of a Grand Slam,” said Medvedev. “But I’ll try to do my best, better than on court I hope. First of all congrats to Novak and your team. Nine Grand Slams in Australia. Eighteen in total is amazing and probably not your last one. I have no words to say.”

The Spaniard says he stayed positive and was fighting throughout the match, but it was not enough
Sport
5 months ago
Next Article