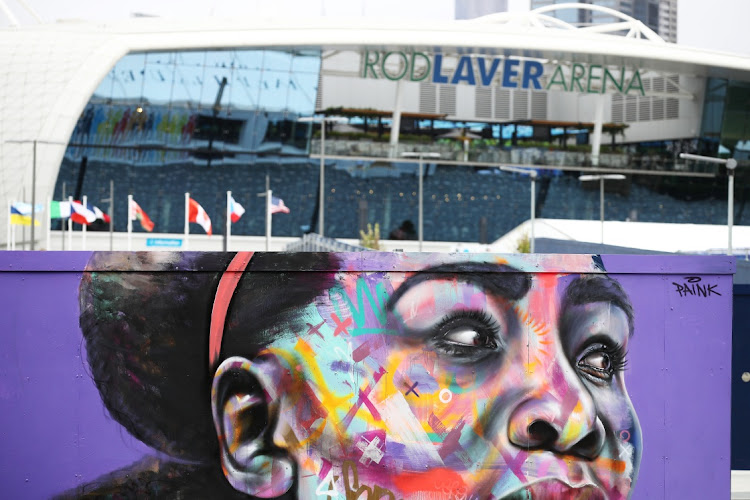 The Rod Laver Arena ahead of the 2021 Australian Open at Melbourne Park in Melbourne, Australia, February 7 2021. Picture: MATT KING/GALLO IMAGES

After a three-week delay, a huge logistical mission and a handful of health scares, a very different Australian Open gets under way on Monday with pandemic protocols providing a backdrop of caution to the action on court.

Serena Williams begins her latest campaign to win a record-equalling 24th Grand Slam title on day one while Novak Djokovic is also in action, the Serb seeking a record-extending ninth Australian Open crown.

Once dubbed the “Happy Slam” by Roger Federer, the 2021 edition might be remembered as the “Nervous Slam” after struggling to build enthusiasm in a wary host nation, but organisers hope the anxious build-up will be forgotten when the action begins.

Tennis Australia (TA) have made a Herculean effort to try staging it safely and spent a fortune on biosecurity measures in a country where community transmission of the novel coronavirus has become rare.

It will be the third Grand Slam of the pandemic, with the US and French Opens passing safely enough. Yet many in Melbourne regard it a pointless risk to the freedoms they earned after spending nearly four months in a brutal lockdown to crush an outbreak in 2020.

Warm-up tournaments that packed out stadiums countrywide a year ago have drawn tiny crowds to Melbourne Park over the past week, even with the game’s biggest stars in action.

A smattering of Covid-19 cases among the 1,200 Australian Open players, coaches and other personnel that landed in the country in January did little to build momentum. News that a worker at one of the tournament’s quarantine hotels caught the virus triggered tighter social restrictions in Melbourne last week and caused 160 players to isolate until cleared of infection.

Tournament director Craig Tiley asked the media to boost the tune-up events but the modest crowds that turned up on Saturday were denied the chance to watch Williams and other former champions after they pulled out of their matches rather than risk injury ahead of the main event.

Melbourne Park is usually heaving with fans but crowds will be capped at 30,000 a day during the Grand Slam, about half normal capacity. They will have to wear masks in the showcourts if the roofs are closed. Digital tickets and the division of fans into three zones will make contact tracing easier if required.

“In our case, we have no [Covid-19] cases in the community so it’s all about protecting our fans, while in other events around the world where they have cases, it’s about protecting the athletes or acts,” TA COO Tom Larner said on Sunday.

The biosecurity bill may top A$40m and TA are resigned to losing a big chunk of their A$80m reserves to pay for it. With Australia’s international border closed, TA will hope home fans turn up to claw back some of that outlay, and for the drama to be confined to the courts.

The onus now shifts to the players to put on a good show, and most sound thrilled about competing in a country where the virus is effectively at bay.

“We are also entertainers. We like to exchange that vibe and energy with the crowd,” said defending champion Djokovic, who plays Jeremy Chardy on Monday. Former champion Naomi Osaka also takes to the court for a tough clash against Anastasia Pavlyuchenkova, first up at Rod Laver Arena.

With luck, the two weeks will pass smoothly and trophies will be hoisted by beaming champions on centre court. Organisers may yet triumph in staging a “Safe Slam”, if not the “Happy Slam” of the prepandemic era.

Players want to entertain fans and people who are suffering due to Covid-19, world No 2 says
Sport
5 months ago