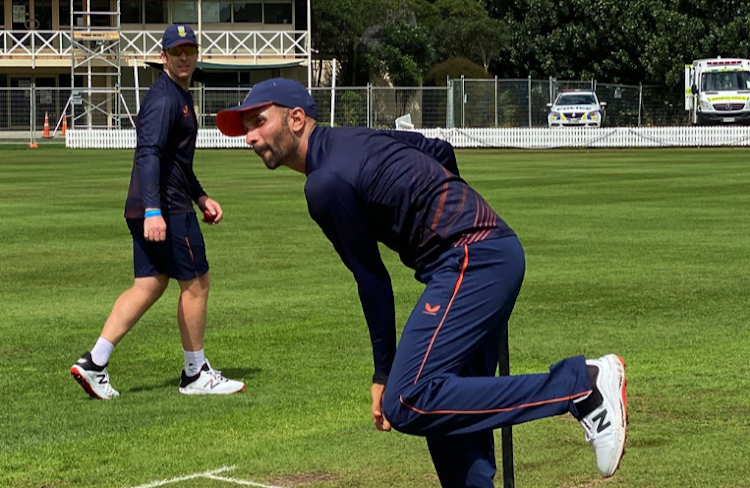 “The Protea spin twins do it again.” This headline has never appeared in SA newspapers before. It ushers in a whole new dimension.

This metamorphosis has taken time to unfold. Keshav Maharaj and Simon Harmer have played more than 300 first-class matches and 47 Tests between them. They validate the 10,000 hours theory popularised by Malcolm Gladwell in his book, Outliers. The theory is that it takes 10,000 hours of intensive practice to achieve mastery of complex skills. The 32-year-old Maharaj and 33-year-old Harmer have done their 10,000 hours.

The art of a spin bowler is not about the deliveries themselves. The ability to read the game and get into the minds of the batsmen allows bowlers to dominate. Their captaincy experience has given them another edge.

Maharaj’s performance was spectacular. Harmer built pressure and took wickets at the other end, tightening the hold on Bangladesh. Bowling and batting partnerships drive individual and team success.

The Proteas team’s exponential growth has been through the leadership of Dean Elgar, Temba Bavuma, Graeme Smith and Mark Boucher. Each one of them is gritty, determined and disciplined. Elgar and Bavuma have fashioned a resolute, tough captaincy style and the team has responded. Individual talent is just part of the story that is unfolding.

In spite of Smith and Boucher working in a very pressured environment, shadowed by legal action, they have not faltered in their commitment. Their tenacity has been extraordinary, and we applaud them.

The Proteas have had a remarkable Test summer so far. However, the batting combinations need to improve. Suddenly there are many options for the selectors to consider.

Because of Covid, match officials’ travel was restricted, forcing the International Cricket Council (ICC) to appoint local umpires in international matches. The Bangladesh series highlighted the inevitable subliminal accusations of bias, which accompany non-neutral umpire appointments, as happened after the first Test.

Owing to the decision review system (DRS) the world sees the umpires’ errors in slow motion. The difficult decisions look easy to the television viewer. This has erased the mystical aura of umpiring. The pressure on them is intense and errors are inevitable. Marais Erasmus understands this more than most.

Umpires need to possess a self-deprecating sense of humour, be resilient and accept their errors as part of their art. In Marais’ first Test match as an ICC elite umpire at Edgbaston, he made three errors in the first session on day one. They were all overturned.

Imagine how he felt at the lunchtime break. His first decision in the afternoon session was sent up to TV umpire Steve Davis for review. Davis, a wonderful team man, was able to report back to Erasmus: “Excellent decision Marais, you can stay with your correct on-field decision.” The immediate retort from Erasmus was: “About bloody time!” A wonderful response under pressure. His Test statistics that match show him to have made all his next 27 decisions correctly. It is no surprise that he became the ICC umpire of the year three times.

Erasmus and Adrian Holdstock had a below-par performance in the first Proteas-Bangladesh Test. However, there were no howlers; their mistakes were understandable. They made a number of excellent decisions, which are always simply expected. The umpires and, in fact the wicketkeepers, are invariably remembered for their mistakes.

Umpires have an added challenge. Players who have not performed either end up in the changing room or being posted to fine leg, thus able to recuperate out of the public eye. Umpires have no respite as they remain on-field, in the spotlight, for every ball of the match. The ability to recover from poor decisions separates the great umpires from the average.

“It is what it is; move on,” was ICC elite umpire Tony Hill’s  favourite expression. They have a resilience that surpasses that of the players.

Rod Tucker, an ICC elite umpire, had not made a mistake for the first two Tests he officiated — unheard of. After his first successful Test, he used to practise the DRS signal of overturning a wrong decision, in front of his hotel mirror. He did not want to be flustered when the inevitable error occurred.

Later that year, at the ICC match officials’ conference, Tucker, in his presentation, showed two of his errors to the group. He then added “and now comes  the famous Rod Tucker shuffle” as the clip showed him overturning the decision. Humour is essential to survive.

So, spare a thought for the umpires. They suffer the arrows of fans, players and media and have to stay unruffled, fair, strong and handle each crisis with a professional air. They deserve the same support and understanding as the players.

VINCE VAN DER BIJL: Our national teams inspire awe in revealing what an ...

VINCE VAN DER BIJL: Our national teams inspire awe in revealing what an ...