The duo, drafted into the side after injuries to front-line bowlers, smash maiden Test 50s to deny Australia a substantial first innings lead 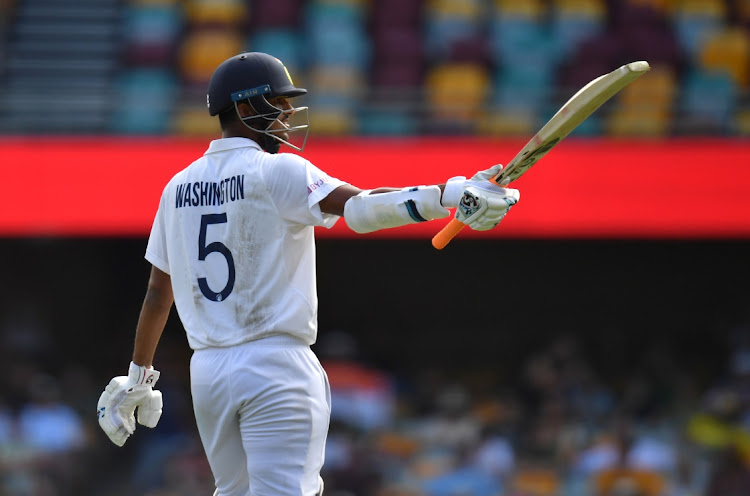 Washington Sundar of India celebrates his half century during day three of the Test match between Australia and India, at the Gabba in Brisbane, Australia, January 17 2021. Picture: AAP IMAGES/DARREN ENGLAND/REUTERS

Brisbane - Debutant Washington Sundar and No 8 batsman Shardul Thakur conjured a defiant rearguard action on Sunday to drag India back into the contest in the deciding fourth Test against Australia in Brisbane.

Drafted into the playing XI because of injuries to India’s front-line bowlers, the duo smashed maiden Test 50s to deny Australia a substantial first innings lead. Having finally bowled India out for 336, Australia finished day three on 21 for no loss, an overall lead of 54 runs in the final match of a see-saw series that remains level at 1-1.

David Warner, batting on 20, and Marcus Harris (1) saw through the final 20 minutes at the Gabba without being separated.

Earlier, India were reeling at 186/6 in reply to Australia’s first innings total of 369, but Sundar’s defiant 123-run seventh wicket collaboration with Thakur rescued the tourists. Playing only his second Test, Shardul brought up his 50 with his second six, nonchalantly hitting spinner Nathan Lyon over the long-on rope.

Sundar, who had claimed three wickets in Australia’s first innings, completed his 50 in the next over in a less spectacular fashion, taking a single off Mitchell Starc.

“It’s obviously a crucial partnership by them,” Josh Hazlewood, who returned 5/57, said. “We had them, I think, about 6/200, around that mark. So we thought we were well on top there and, to be fair, the guys batted really well.”

Their resolute batting contrasted the dubious shot selection by some of their top-order teammates. Resuming on 62/2, the tourists added 43 runs before Hazlewood dismissed the obdurate Cheteshwar Pujara for 25.

Skipper Ajinkya Rahane chased a wide Starc delivery to depart for 37 and Hazlewood struck twice after lunch to dismiss Mayank Agarwal (38) and Rishabh Pant (23). Pant perished attempting a Twenty20 shot, trying to steer a rising delivery over the slip and finding Cameron Green at gully instead.

Sundar, who made 62, and Thakur frustrated the hosts, aided by the occasional stroke of luck. Thakur smashed nine boundaries in his belligerent 67 and by the time Pat Cummins pegged back his off-stump, India had crossed the 300-mark.

“The idea was to bat as long as possible,” Thakur said in a video conference. “The more we score, the less would be their lead. We just wanted to spend some time there.”

Regular captain Virat Kohli led the tributes to Thakur’s brave batting but the batsman was underwhelmed by his praise as he never considered himself a dud with the bat.

“Outstanding application and belief by @Sundarwashi5 and @imShard. This is what Test cricket is all about,” Kohli, who returned home after the opening Test to attend the birth of his daughter, said on Twitter.

Thakur, who claimed three wickets in Australia’s first innings, said he did not want to waste an opportunity to impress with the bat.

“I do believe I have some batting talent,” the seamer said. “I do work on my batting in the nets. We wait for these moments, these opportunities, to contribute with the bat.”

Aussie coach Langer goes in to bat for Paine and Smith

India on back foot as Australia look to seal series

Aussie coach Langer goes in to bat for Paine and Smith

India on back foot as Australia look to seal series