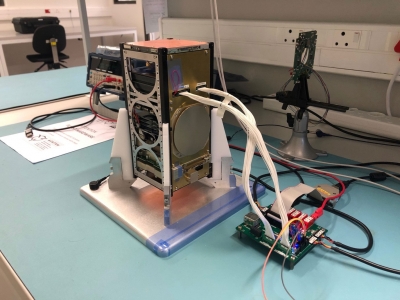 An engineering qualification model of the MDASat-1 being tested. Picture: CPUT.

Higher education, science and innovation minister Blade Nzimande said the first three satellites of its Maritime Domain Awareness Satellite (MDASat) constellation were scheduled to be launched from Cape Canaveral in the US at 5.25pm SA Standard Time, depending on weather conditions.

The full MDASat constellation will be an operational constellation of nine cube satellites that will detect, identify and monitor vessels in near real-time.

The work is being implemented by a team at the Cape Peninsula University of Technology (CPUT).

Thursday’s space mission comes three years after the launch of the most advanced SA nanosatellite to date, ZACube-2, as a technology demonstrator for the MDASat constellation.

“Since its launch in 2018, ZACube-2 has been providing cutting-edge very high frequency data exchange communication systems to the country’s maritime industry,” Nzimande said, adding that the department had invested R27m over three years in the development of the MDASat constellation.

CPUT explained previously that the MDASat-1 will use Automatic Identification System (AIS) data to monitor the waters off SA’s coast for shipping movements within the country’s exclusive economic zone .

AIS is a radio system used for the tracking of maritime traffic, primarily for collision avoidance. The location messages received by the satellites from ships on the ocean beneath it are downloaded from the satellite when it passes over the ground station at CPUT.

“The data gathered by the mission will typically be used by the SA government to contribute to the effective management of the SA territorial waters. An important development is that SA will now possess the home-grown capability and know-how to acquire this vital information and will not be solely dependent on foreign companies for this data,” said the university.

Musk’s SpaceX said it was preparing a Falcon 9 launch of Transporter-3 to orbit from the Space Launch Complex 40 at Cape Canaveral Space Force Station in Florida, with a 29-minute launch window on Thursday, with a backup opportunity available on Friday.

Transporter-3 is SpaceX’s third dedicated rideshare mission, and on board this launch are 105 spacecraft (including CubeSats, microsats, PocketQubes, and orbital transfer vehicles), the company said.

A webcast of this mission began about 15 minutes before lift-off.

SpaceX is targeting Thursday, January 13 for a Falcon 9 launch of Transporter-3 to orbit from Space Launch Complex 40 (SLC-40) at Cape Canaveral Space Force Station in Florida.

A pair of dangerously close space encounters is adding to tensions between the US and China, while underscoring the potential peril to astronauts as ...
News
2 weeks ago

Little-known Earth Engine is helping nonprofits and researchers to manage deforestation, floods and droughts
Businessweek
2 months ago
Next Article