Its future depends on the recovery of engine flight hours and a shift to a post-carbon economy, but it's still a ‘great, great British company’ 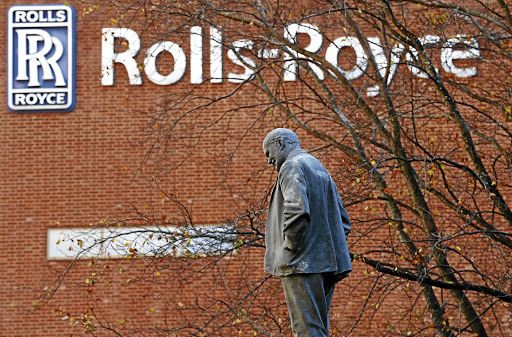 A statue of Henry Royce outside Rolls-Royce in Derby, England. Picture: REUTERS

London/Paris — Rolls-Royce may be the jewel in Britain’s industrial crown, but the coronavirus crisis has left the engine-maker facing one of the toughest challenges in its 114-year history.

The Airbus and Boeing supplier bought itself time by raising £5bn to survive the global grounding of aeroplanes, but is warning that 2020 will be even worse than expected.

Before it secured extra funds in November, analysts had raised the possibility that the maker of power plants for British nuclear submarines might need to be saved by the state. And Prime Minister Boris Johnson sought to allay concerns in November, saying the government would work with Rolls to ensure its long-term future as a “great, great British company” after credit agencies cut its debt rating to junk.

As one of only four major aviation engine-makers globally, Rolls symbolises British industrial interests at a crucial time for a country trying to assert its place in a post-Brexit world and dogged by uncertainty over future trade relations. But existing concerns over a long-running problem with engine blades have been compounded by worries over Rolls’s finances, which represents a significant stumbling block in an industry in which airlines sign decade-long agreements.

With many airlines only paying when they fly, Rolls’s future depends on the recovery of engine flight hours on wide-body intercontinental jets, and convincing its airframer partners and airline customers that its problems are behind it.

Both have fretted about one of the industry’s crucial suppliers during the crisis, several industry executives said. “When you buy a plane it is for many years. If the engine manufacturer disappears or changes shape, that can hurt the [future] value,” one airline executive said.

The problems are particularly unsettling for Airbus, which depends on Rolls for all wide-body jets after the A380’s demise. And airlines looking to its flagship A350 or smaller A330neo are asking Airbus for reassurance both about Rolls’s engines and its financial position.

While Airbus backs Rolls’s technology, it wants “to understand what is going on with them on everything”, an industry source said. Airbus had no comment on supplier discussions.

Meanwhile, at Boeing, many of its 787s had to be grounded due to the Trent 1000 problem, which Rolls says will cost it £2.1bn to fix in the 2017-2023 period, just as travel demand was surging before the pandemic.

Boeing, keen to keep its main engine partner General Electric (GE) competitive, is also anxious about Rolls, sources said. Boeing said it valued its “strong and long-standing partnership with Rolls-Royce and the company’s commitment to safety, quality and integrity”.

In response to questions, Rolls referred to comments made by CEO Warren East on December 11. “We can now look forward with confidence that we have sufficient liquidity to get through the crisis, however long it lasts,” East said of the company’s November fundraising.

Without a recovery in engine flying hours, Rolls will struggle for revenue to repair its balance sheet, a prerequisite for investing in new technology to secure its future and leave its problems behind.

Those troubles stem largely from cracked turbine blades in the Trent 1000 engines used in some twin-aisle jets and Rolls’s lack of a presence in single-aisle, short-haul models, which are predicted to lift airlines out of the Covid-19 crisis.

Engine makers were locked in a long-running chess game even before the pandemic, which analysts say Rolls entered more dependent on out-of-favour intercontinental jets than its most direct rival GE.

Now under East, Rolls faces the quest for greener technology without the finances it enjoyed after a stint of state ownership in the 1970s and 1980s. Rolls has other divisions operating in nuclear and defence that are more resilient and it also hopes to raise more than £2bn by selling assets in a challenging market.

“He took charge of a tanker that was heading towards an iceberg. Then all of a sudden, the pandemic meant the ship started going faster,” Teal Group analyst Richard Aboulafia said.

East, who became CEO in 2015, wants to correct what most view as a mistake in exiting a venture with Pratt & Whitney to power Airbus single-aisle jets. Airbus went on to sell 7,455 A320neos with new engines from Pratt or GE/Safran joint venture CFM.

Rolls is fine-tuning another bet on new engine architecture. Its UltraFan engine will be 25% more efficient than its early Trents by blending innovations in the core and the surrounding flow of cooler air, while being more flexible in size.

Though Covid-19 dented service revenue by speeding the demise of the Airbus A380, it helped Rolls by giving it more time to prepare for the only potentially new project: a possible Boeing 757 replacement that could lay the foundations for a future replacement to the troubled 737 MAX.

Rolls faces the battle of the decade against CFM and Pratt & Whitney to be included if Boeing, looking to put 737 MAX problems behind it, proceeds with any plan to build a new aeroplane.

“If Boeing launches a new aircraft, Rolls has to be on it,” said an industry source who has studied the mid-market plans. But Brexit means it could face more competition on its Airbus home market as two opposing fronts, with GE powering most Boeing wide-body jets and Airbus tied to Rolls, start to unwind.

Cemented by joint European research initiatives, Rolls’s pairing with Airbus was once so tight that Airbus secretly examined buying it eight years ago, according to people familiar with the aborted study.

Since a breakthrough in Covid-19 vaccines in November, Rolls’s shares have soared on hopes that the worst is behind it, but they are still down by half from the beginning of the year.

It said last week that the recovery in engine flight hours — the main driver of service revenues — was slowing due to a new wave of Covid-19 infections, and it would burn through £4.2bn of cash in 2020, slightly more than it expected in October. But East stuck to targets, saying cost cuts were working.

Along with other engine makers it increasingly faces a new problem: how to decarbonise an industry that makes gas turbines.

East has told investors he will stick around to oversee the move to a post-carbon economy, but having resources to invest will depend on asset sales and a wide-body market recovery.

Agency Partners analyst Nick Cunningham said, “Nobody has any idea what’s the technology that wins is going to be, and so, everyone’s going to be throwing mud at the wall and Rolls can’t really afford to do that.”

Investors give Rolls-Royce the green light for $2.6bn equity sale

Passengers flying between Rome and some US destinations can be tested for the coronavirus 48 hours before departure and on arrival to avoid Italy's ...
World
5 months ago
Next Article

Rolls-Royce to raise billions in emergency plan to survive pandemic

Rolls-Royce to raise billions in emergency plan to survive pandemic