Looting and lawlessness in SA have brought the political propagandists, populists and opportunists out into the open. We should publicly decry them, lest we become inured to such evil 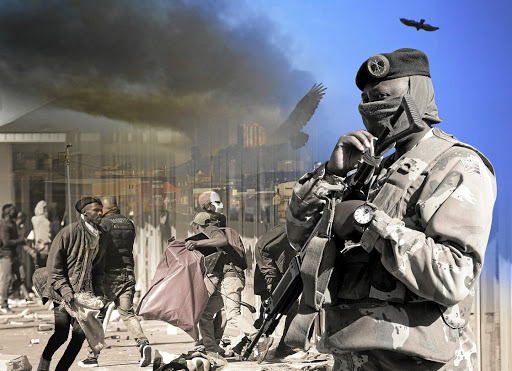 Whenever there’s a crisis in SA, there are always people eager to take advantage of it, like vultures circling a dying person. These range across a spectrum. The malls had barely caught alight this past week, and I already had an SMS from the Automobile Association of SA (AA) saying: "Stay safe during the SA unrest. AA Armed Response for only R35p/m to keep you and you loved ones safe. Download the App now."

In its unseemly haste to profit, the AA left the "r" off "your".

At the other end of the spectrum, you have the looters themselves, destroying, stealing and killing. Deaths are at 45 and, I fear, counting, at the time of writing this column.

Or perhaps it’s not a spectrum, with its suggestion of a rainbow of different colours, but a continuum, with its implication that the elements that are adjacent to one another are not actually that different from one another, though the outlying extremes are very distinct.

Our country is so damaged, it barely registers how weird it is that an automobile association, formed to provide motoring advice, vehicle insurance, road maps and other services, has an armed response unit.

I’ve only done a cursory search on this, but somehow, I don’t think that’s a big part of your UK or American membership drive.

We have bigger — much, much bigger — things to worry about, of course. And while most of us almost certainly don’t condone looting — though we are perhaps less certain about its relatively benign cousin, marketing — we at least understand the social pressures that have foisted it upon us.

What’s more difficult to comprehend are the people and organisations who have absolutely no compunction about peddling violence and death for their own selfish ends.

The star performer in this regard, you won’t be surprised to learn, is the EFF, that scarlet pimple on the face of our democracy.

The EFF CICSSU (Commander-in-Chief So Shut Up), Julius Malema, has issued a call to arms on Twitter. "No soldiers on our streets! Otherwise, we are joining. All fighters must be ready … they won’t kill us all. We need a political solution to a political problem, not soldiers."

Yes, Malema’s solution to the violence and death unleashed on SA is to send his "fighters" out into the streets to die for him.

When he says "they won’t kill us all", you can be quite sure he means "they might kill you, but I’ll be OK".

In line with his organisation’s predilection for xenophobia, Malema also happily retweets a post saying: "The KZN Indians from Phoenix have declared war with black people. They are killing and burning the cars of black people passing by their area."

By doing this, he opportunistically takes advantage of the death and destruction to turn the situation into one of racial conflict, the fault line on which populist politics thrives.

Another example from the CICSSU: "I see white civilians armed and shooting live ammunition at unarmed civilians. Please don’t say they started it; but your response will possibly be matched."

Malema expends no effort in fact-checking this, but instead offers anecdotal evidence to justify his threat that white civilians will be shot. Sorry, "possibly" shot.

It’s all fun and games to the EFF. People dying, small business owners ruined, Covid running rampant? All that means to the EFF’s Member of the Central Command Team Dance Squad, Nazier Paulsen, is a joke about how he missed out on the opportunity to join in the looting: "We shut down all Clicks stores without any looting. And I needed an air fryer so badly."

One of the other vultures instigating the looting and violence, and taking advantage of the desperate plight of poor people in order to sustain her own Gupta-given status, is Duduzile Zuma-Sambudla, popularly known as Ivanka Zuma by Twitter users.

There’s a divide in the way some media are hashtagging the unrest, with some, like News24, going with #ZumaUnrest, and others, like Eyewitness News, using the more nuanced #ShutdownSA.

What’s undeniable, though, is that the pro-Zuma radical economic transformation group would love to push the unrest as being protests in support of convict No 1.

It’s difficult to determine whether the Zuma-Sambudla Twitter account is legitimate, as she hasn’t responded to questions about it, and because it’s very hard to tell the difference between an account pretending to be a self-serving, uncaring Zuma captured by the Guptas and the real thing.

Tweets from the Zuma-Sambudla account bear all the hallmarks of the rabble rouser, from the excessive love of capital letters, breathlessly long sentences and exclamation marks, to the use of Bell Pottinger-inspired tropes.

Take this gibberish, for example. "Our Proxy Leader Of WMC Is Trying To Find Someone To Blame Here On Twitter Instead Of Leading And Taking Accountability For Failing To Lead Us And Failing To Deliver To Our People. Busy With Useless Commissions And Investigations Instead Of Directing Those Funds To The Poor!"

People are dying, small businesses are being ruined, Covid is raging. It’s all fun and games to the EFF

Here’s another one, so that you get the full flavour of her rhetoric. "The Apartheid Government, Because They Had No Politics, Used The Army To Kill Our People. The Proxy Leader For WMC Is Going To Do The Same To Our People In A Time Of Democracy! Because They Have No Politics!"

You’ll notice how nicely this take syncs with Malema’s, in terms of accusing President Cyril Ramaphosa of employing apartheid-like tactics that reveal a hatred of "the people".

But the account also more directly stokes violence. For example, a now deleted tweet featured a video of a man target-shooting with live ammunition at an ANC poster of Ramaphosa.

You might wonder why we need to constantly raise issues like the Zumas’ "let them loot cake" lifestyle, and the EFF’s habitual strategy of exacerbating and exploiting the racial divides in our country, when it’s all so violently obvious. If I had R1,000 for every time someone has said to me: "Why does the media insist on giving idiots like Carl Niehaus airtime?", I might have enough for a downpayment on one of those watches Malema likes to wear.

The reason, for me, is because we don’t want to become inured to the evil propagandists in our midst. We already don’t blink an eye when the AA offers us armed response, because we’ve stopped noticing the less egregious examples of how broken our country is.

If we just quietly sit back and let individuals and organisations profit off hate speech and fostering divisions, we’ll wake up one day in a world where such language is taken for granted, and where the ammunition stored up by those who thrive on violence and division will be deployed to tragic ends.

President Cyril Ramaphosa won the fight for the ANC when he was elected by a narrow margin at the Nasrec conference in 2017. But has he won the war?
Features
10 months ago

‘Leaders’ took a hard blow to their legitimacy as looting raged. Meanwhile, contempt for the rule of law flourishes
Opinion
10 months ago

Corruption thrives in a destabilised state with weak institutions. SA cannot be allowed back to that space because there will be no turning back
Opinion
10 months ago