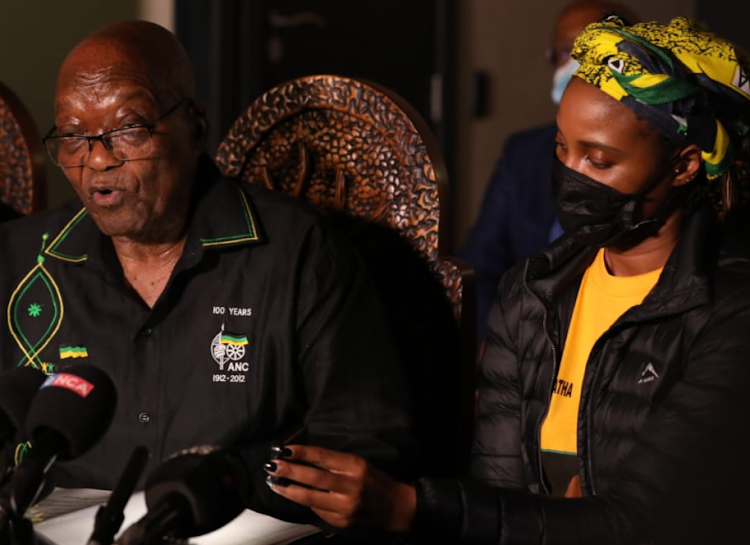 Former president Jacob Zuma and his daughter, Duduzile Zuma-Sambudla, at a press conference in Nkandla a few days before the former statesman was imprisoned. Picture: Sandile Ndlovu

If anything justifies a prison sentence in the Zuma family right now, it is the rabid incitement to violence that the former president’s daughter Duduzile Zuma-Sambudla, the Ivanka of the bunker, has exhibited on social media. From tweeting pictures of a machine gun aimed at President Cyril Ramaphosa’s face on an ANC poster, to images of trucks burning in Mooi River with the tagline "We see you! Amandla!", social media accounts in her name have helped to inflame and amplify the horrific lawlessness in KwaZulu-Natal.

Equally, the drivel in which the JG Zuma Foundation has indulged is disturbingly provocative. "Peace and stability in SA is directly linked to the release of president Zuma with immediate effect," it said this week. "It was just pure malice to incarcerate president Zuma whilst litigation on his detention without trial case … was ongoing."

The thuggery, explicit and breathtaking, clearly shows the role that the Zuma family and the pro-Zuma faction of the ANC seem to be playing in the destabilisation of the province and, by extension, the country. The DA, which plans to lay charges with the police, said this week that failure to act against Zuma’s family members would embolden them "to say and do what they want with no fear of consequence". It is time South Africans stood up to this thuggery.

Rather than arresting criminals for the looting, and reassuring business owners that they’ll be protected, our political leaders are prevaricating, ...
Opinion
11 months ago

Jacob Zuma’s daughter has been his most strident defender, but she is also fuelling the riots on social media
Opinion
11 months ago
Next Article