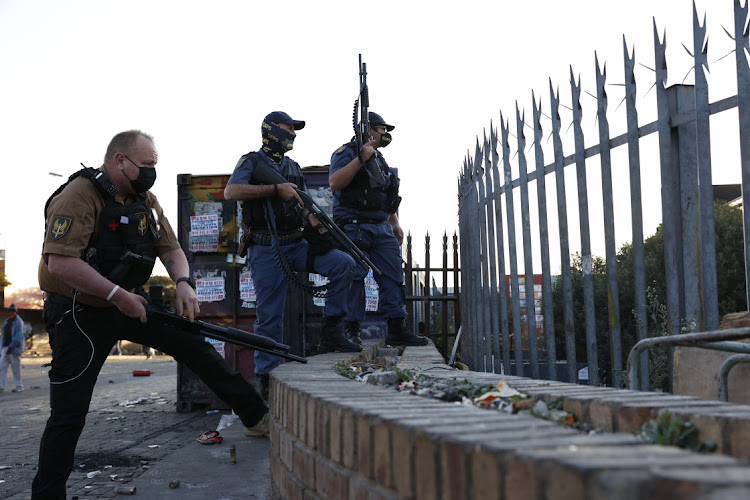 “For three increasingly unbelievable days, violent and lawless events ran shockingly ahead of the collective ability to anticipate or control them once they erupted,” the UK’s The Guardian newspaper wrote in an editorial 10 years ago.

It continued that this was a huge failure, shared between politicians, police, communities and households, though the events were “much harder to anticipate”. The BBC asked if the prime minister of the day, David Cameron, could “regain control of the streets of the country he’s meant to be in charge of”.

Similar to events in SA, the riots were sparked by one event, in this case the killing of a man by police in north London.

Before anyone blinked, the mayhem had spread to cities in the north such as Manchester and Liverpool. Five people were killed, thousands were left with criminal records and the cost was put at about £300m, equivalent to R6bn in today’s exchange rate.

SA’s death toll reached 72 on Tuesday with 1,234 arrests and the damage to the economy will be more than can be quantified in terms of property destroyed or work hours lost, or people who aren’t able to access key medical services. The damage to the country’s self-confidence and outside image will take a long time to recover.

The UK example is only useful in so far as it shows how quickly disorder can escalate when crowd psychology takes over after a trigger, leaving even one of the best-resourced and skilled forces in the world wrong-footed. Given the quality of our leadership, South Africans can lament that we really didn’t stand a chance and were left as sitting ducks when the fuse was eventually lit.

The criminality that we have observed is disillusioning in many ways. As president, Jacob Zuma oversaw a period of unprecedented looting, weakening of the state and economic destruction that left millions without jobs. And yet here we are, with so many people apparently willing to kill and die for him, while destroying property and jobs.

Not being the kind of statesman who was going to put the country first, Zuma was never going to stand up and say “not in my name”. In any case, the events have already gone beyond him and his accomplices in creating the conditions for this criminal assault on the country.

This was the time for President Cyril Ramaphosa, who famously marked the start of the national lockdown in March 2020 by donning a military uniform, to stand up and show that he could “regain control of the streets of the country he’s meant to be in charge of”. Unfortunately his address on Monday, which Business Day’s sister publication Financial Mail likened to an address to a flower garden fundraiser at the local Rotary Club, failed to do the trick.

What matters now is what the country’s leadership does, more than what it says. The disorder and criminality has to be confronted and stopped now, and then we can start speaking about the structural issues that have contributed to the mayhem.

It’s hard to feel confident. State security minister Ayanda Dlodlo had to resort to counterfactual arguments to explain the lack of readiness, claiming that “we averted more than what you see on television because of the collective stance of the intelligence services”. They couldn’t secure all those shopping malls in Durban that are being looted on live television? Defence minister Nosiviwe Mapisa-Nqakula is similarly not a reassuring figure to have in a crisis.

A historian once wrote that what distinguished the state in developing countries was the combination of its power and fragility. In SA this week, we have seen its fragility, with deadly consequences. Its power has proved to be illusionary. We had known this with regards to its failure to provide basic services such as water, electricity, postal services or a public service that can perform a simple task such as issuing a passport on time.

This week it has shown itself incapable of its basic function of protecting life and property. The immediate priority must be to restore order. Much harder work will be needed afterwards.

When decisions are made by mobs threatening violence, rather than the rule of law, it is not a democracy at all
Opinion
1 year ago
Next Article