Tens of thousands came to a hilltop pilgrimage site in April, and when a crowd surged into a narrow tunnel, 45 men and boys asphyxiated or were trampled to death 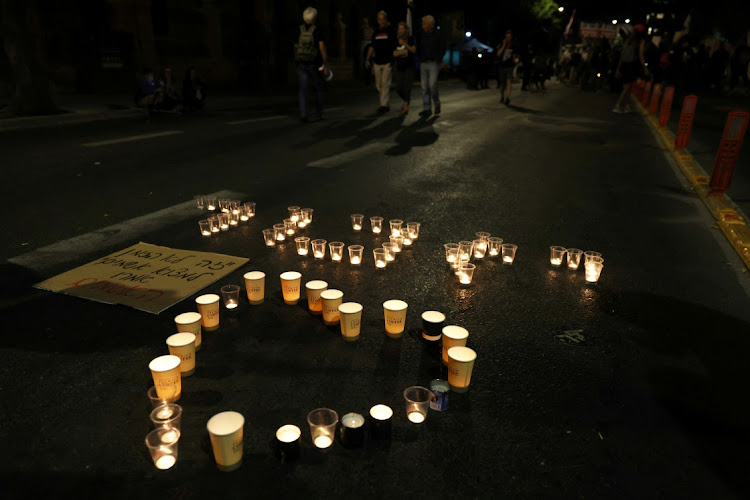 Candles are seen during a vigil for the people killed and injured in a stampede at an ultra-Orthodox Jewish festival on the slopes of Israel's Mount Meron in Jerusalem May 1 2021. Picture: REUTERS/RONEN ZVULUN

Jerusalem — An Israeli state inquiry into a crush that killed 45 people at a Jewish pilgrimage site in April recommended on Monday that future admissions be capped and ceremonies streamlined to prevent overcrowding.

The panel, headed by a former Supreme Court chief justice, submitted interim findings designed to help authorities better plan for the next festival at Meron, the Galilee tomb of second-century sage Rabbi Shimon Bar Yochai, on May 18-19.

Before the Covid-19 pandemic, the annual commemorations could draw as many as 200,000 worshippers for all-night prayer, mystical songs, picnics and dancing around bonfires.

Tens of thousands came on April 30 to the hilltop pilgrimage site, which covers about 2.28ha. When a crowd surged into a narrow tunnel, 45 men and boys were asphyxiated or trampled to death.

“The material brought before the commission and testimonies heard by it indicate that the maximal number of people that could be safely contained at the area at the same time is approximately 20,000,” the panel said in a 16-page report.

While not recommending a target number, it said more space could be freed up by banning tents and pirate vendors at the site and by holding one central bonfire ceremony.

Pilgrims could be encouraged to rotate by busing them in and out on tickets valid for specific hours, the panel said. It advised against allowing in food to “reduce the duration of stay [and] the danger of falling and slipping on garbage”.

“The 2022 observances at Meron will be entirely different from the observances held heretofore, and will take place according to other safety standards,” religious affairs minister Matan Kahana said in a statement.

The panel is separately looking at possible culpability among planners of the April observances, which took place under the previous government of Benjamin Netanyahu.