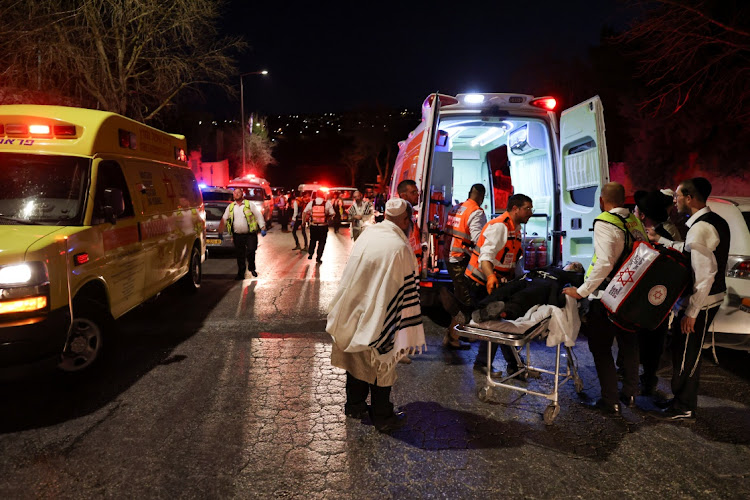 Rescue workers transport an injured man to an ambulance outside a synagogue in Givat Zeev, in the occupied West Bank on Sunday. Picture: RONEN ZVULUN/REUTERS

Jerusalem  — At least two worshippers were killed and more than 100 injured on Sunday when a  tiered seating structure  collapsed in a synagogue under construction in a Jewish settlement in the West Bank, Israel's national ambulance service said.

The accident in Givat Zeev, just north of Jerusalem, raised more questions about safety measures at large ultra-Orthodox events, two weeks after 45 pilgrims were crushed to death in a stampede at the burial site of a Jewish sage in northern Israel.

A police spokesperson said 650 worshippers were at the Givat worship site for the start of the Jewish holiday of Shavuot.

The event was held in a partially constructed synagogue. The local mayor and senior fire brigade and police officers said it had gone ahead despite the lack of a permit and official warnings that the building zone was unsafe.

A spokesperson for the Magen David Adom ambulance service said at least two people were killed. Ambulances and military helicopters ferried the injured to hospitals.

Security footage broadcast on Channel 12 TV showed the crowded structure collapsing and worshippers falling on top of each other.

“We were called again to another event where there was negligence and a lack of responsibility. There will be arrests,” Jerusalem district police chief Doron Turgeman said from the scene, on live TV.

Israel could be fighting ground battles on its southern, northern and eastern fronts and the death toll would be very high
Opinion
5 months ago

The predawn attacks were on houses in the centre of Gaza City, officials say
World
5 months ago

Residents in Acre, a mixed Arab and Jewish city, say they are frightened to leave home amid reports of youths attacking each other
World
5 months ago
Next Article