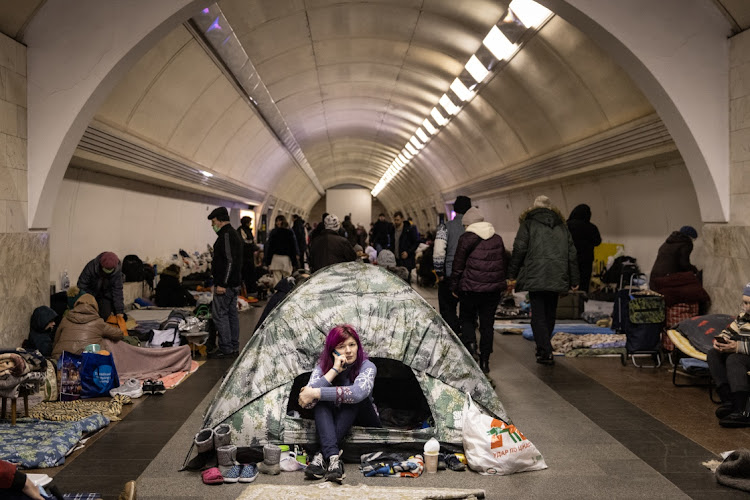 Lviv — Russian forces bearing down on Kyiv are regrouping northwest of the Ukrainian capital, satellite pictures showed, and Britain said on Friday Moscow could now be planning an assault on the city within days.

Ukraine accused Russian forces of hitting a psychiatric hospital near the eastern Ukrainian town of Izyum, in what the regional governor called “a brutal attack on civilians”. Emergency services said no-one was hurt as the patients were already sheltering in the basement.

Russia has been pounding Ukraine’s cities while its main attack force north of Kyiv has been stalled on roads since the invasion’s early days, having failed in what Western countries say was an initial plan for a lightning assault on the capital.

Images released by private US satellite firm Maxar showed armoured units manoeuvring in and through towns close to an airport at Hostomel on Kyiv’s northwest outskirts, the site of intense fighting since Russia landed paratroops there in the first hours of the war.

Other elements had repositioned near the small settlement of Lubyanka just to the north, with towed artillery howitzers in firing positions, Maxar said.

“Russia is likely seeking to reset and re-posture its forces for renewed offensive activity in the coming days,” Britain’s ministry of defence said in an intelligence update. “This will probably include operations against the capital Kyiv.”

Ukraine said Russian forces were regrouping after taking heavy losses. In its overnight statement on the battlefield situation, the Ukrainian general staff also said it had pushed Russian forces back to “unfavourable positions” in the Polyskiy district, an area which is near the Belarus border and to the rear of the main Russian column heading towards Kyiv.

Oleh Synegubov, governor of the Kharkiv region, said 330 people had been at the psychiatric hospital when it was hit: “This is a war crime against civilians, genocide against the Ukrainian nation,” he wrote on the Telegram messaging app.

The reported strike came less than two days after Russia bombed a maternity hospital in the besieged southern port of Mariupol, an attack Washington has called a war crime. Ukraine said pregnant women were among those hurt there; Russia said the hospital was no longer functioning and was occupied by Ukrainian fighters when it was hit.

For a seventh straight day, Russia announced plans to cease fire to allow civilians to leave Mariupol, site of Ukraine’s worst humanitarian emergency, with hundreds of thousands of people trapped with no food, water, heat or power.

Ukraine said it would try yet again to mount an evacuation from the city: “We hope it will work today,” Deputy Prime Minister Iryna Vereshchuk said.

All previous attempts to reach Mariupol have failed with both sides accusing each other of failing to observe ceasefires.

Washington said Russian targeting of civilians in Mariupol was a war crime. Moscow denies it has been targeting civilians in what it calls a “special operation” to disarm and “de-Nazify” Ukraine, which it says is going to plan.

EU leaders were holding a summit at France’s Versailles Palace, expected to be dominated by calls for more action to punish Russia, assist Ukraine and cope with an influx of nearly 2.5-million refugees in just two weeks.

In the two weeks since the invasion, Western countries have swiftly moved to isolate Russia from world trade and the global financial system in ways never before visited on such a large economy.

In the latest move, sources said US President Joe Biden will ask the Group of Seven industrialised countries and the EU to strip Russia of normal trade rights, known as “most favoured nation status”. That would allow hitting Russian goods with new tariffs.

On Friday, three air strikes in the central Ukrainian city of Dnipro killed at least one person, state emergency services said, adding that the strikes were close to a kindergarten and an apartment building.

While Russia’s advance on Kyiv has been stalled and it has failed so far to capture any cities in northern or eastern Ukraine, it has made more substantial progress in the south. Moscow said on Friday its separatist allies in the southeast had captured the town of Volnovakha north of Mariupol.

The US Senate voted on Thursday to approve legislation providing $13.6bn to help Ukraine finance ammunition and other military supplies, as well as humanitarian support.

Russia is the world’s leading exporter of combined oil and gas. Its energy exports have largely been exempted from sanctions so far, though Washington has announced it will stop buying Russian crude.

The EU is also working on longer term plans to phase out imports of Russian oil, gas and coal, but Hungarian Prime Minister Viktor Orban said in a video posted on Facebook on Friday the bloc would not put sanctions on Russian energy.

The information war picked up on social media as well, with Russia demanding that Washington stop the “extremist activities” of Facebook owner Meta Platforms, which temporarily lifted a ban on calls for violence against the Russian military and leadership.

The social media company will temporarily allow some posts that call for the death of President Vladimir Putin or Belarusian President Alexander Lukashenko in countries including Russia, Ukraine and Poland, according to internal emails to its content moderators.

By the numbers | The Russia-Ukraine military imbalance

HILARY JOFFE: Global capacity for sanctions far more effective than in the days of apartheid

Ukraine needs to stand fast for next 10 days, to force Russia back into talks, official says

Vadym Denysenko, adviser to Ukraine’s interior minister, says Russia is desperate for at least some kind of victory
World
5 months ago
Next Article