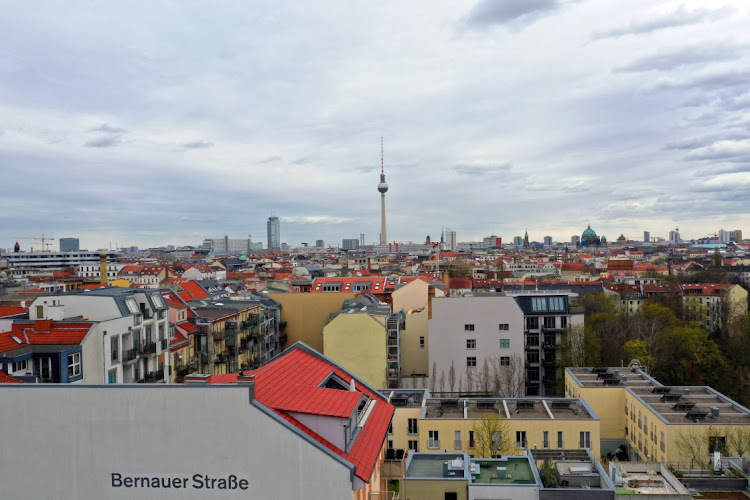 Apartment blocks and residential property on the city skyline in this aerial photograph in Berlin, Germany, on Thursday, April 15 2021. Picture: BLOOMBERG/LIESA JOHANNSSEN

The decision on Thursday by the Federal Constitutional Court to topple the aggressive clampdown on rents exposes thousands of voters to higher living expenses and highlights the housing squeeze in German cities.

“The ruling is bitter, hitting tenants in 1.5-million Berlin flats hard,” said Lukas Siebenkotten, president of Germany’s tenant association. “But it’s also a wake-up call for the federal government to finally act and stop the explosion of rents in so many German cities.”

While Berlin is particularly exposed because of its abrupt swing from real estate backwater to boom town, rents are a national issue in Germany because of relatively low rates of home ownership. Chancellor Angela Merkel sought to tackle the issue in 2018 with a pledge to invest more than €6bn to build new housing.

With national elections looming in September and local rental caps now blocked, politicians face greater pressure to show they have an answer for the country’s tenants — a sensitive issue with pandemic lockdowns forcing millions of people to work from home.

The Social Democrats, Greens and the Left party, which were behind the Berlin law, indicated that they would seek federal legislation to cap rents — 54% of Germans support such legislation, according to a survey by real estate service provider Objego.

“It created uncertainty in the housing market, slowed investment and didn’t create a single new apartment,” Seehofer said in a statement. Building more homes “is and remains the best tenant protection”.

The regulation had unintended side effects by prompting more apartments to be sold and thereby making apartments even harder to come by, according to a study by German think-tank Ifo.

“While rents in Berlin have increased less than in other German cities, the supply of apartments has also become scarce,” Mathias Dolls, a co-author of the study, said in an interview after the court’s decision.

The rules — seen as a potential model for cities from Amsterdam to New York — took effect in February 2020 and froze rents for five years at the level they had in June 2019. In November, additional rules came into force requiring Berlin landlords to cut rents if they were higher than limits set by the city government.

But Germany’s highest court ruled the country’s civil code has extensively regulated the relationship between landlords and tenants, including pricing, so there was no room for Berlin to step in.

Shares in some of Berlin’s biggest private landlords jumped on the news. Deutsche Wohnen climbed as much as 6.8%, to trade firmly above the level before the rent cap’s introduction in 2019.

Shares of peer Adler Group gained 5.2%. Its bonds due 2029 gained 1.5c on the euro to 97.5c, the highest level since they were issued in January, according to data compiled by Bloomberg.

Vonovia, one of Germany’s largest landlords, said the court’s decision was logical, but said it would not claw back up to €10m in foregone rents. Its stock was up 1.6%.

Responding to the court’s decision, Sebastian Scheel, Berlin’s top housing official, defended the rent cap and said it had helped stop rising rents from causing social hardship. He called on Merkel’s government to step in.

“It is now the task of the federal government either to create an effective rental-price law that ensures the appropriate social mix in the cities, or to transfer the competence for it to the federal states,” Scheel said. The Berlin government will discuss the consequences of the verdict on Tuesday, he said.

City officials have said the freeze was intended to give renters “breathing room” while construction rises to at least 20,000 new homes annually, more than four times the level in 2010. Traditionally, Berlin is a city of tenants, with more than 80% of the population renting.

Finding a home in Germany’s trendy capital has got steadily more difficult over the past two decades as new residents, investors, start-ups and companies moved in. Rental prices in many neighbourhoods have more than doubled since 2009 as construction lagged demand.

Berlin was unimaginably cheap until about 15 years ago. Though vibrant and beloved by artists and students, it had little industry, few jobs and a glut of derelict apartments. That all began to change as Berlin became the premier start-up hub in continental Europe. Then big companies, such as Amazon.com,  Daimler and Sanofi, moved in.

The lack of affordable housing is set to remain a tense issue in Berlin. Activists are gathering signatures in an effort to call a referendum on a plan to force the city to buy out large landlords, which control an unusually high proportion of the rental market.

The Berlin government is in part responsible for the situation. After the Berlin Wall fell, the city racked up billions of euros in debt and tried to pay it down by selling what it could. That included more than one-third of its public housing or about 200,000 apartments.

Reading out e-mails from some threatening to leave a party; sarcasm; accusations of flip-flopping — German politics is not holding back
World
3 weeks ago

It’s not too late to buy Sirius shares, as its six-year winning run is expected to continue — come rain, shine or Covid
Money & Investing
3 weeks ago
Next Article